A Weekend with the Doolittle Raiders 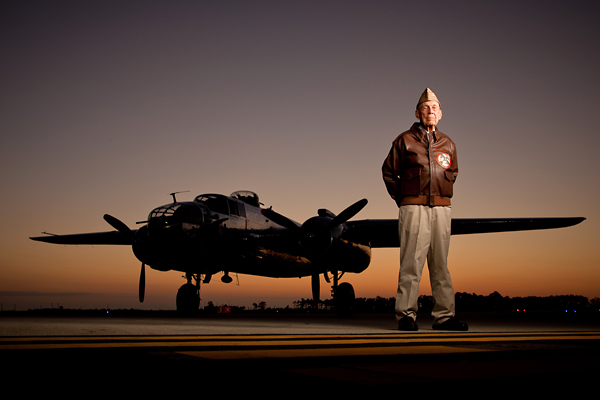 I'm a real military aviation history buff, so it was an incredible honor when I was recently assigned to take portraits of the Doolittle Raiders for Smithsonian Air and Space Magazine.  It was especially gratifying because I was able to pitch the idea to the magazine and then get the green light to take on the assignment.

The Doolittle Raid was America's first major strike back at the Japanese after Pearl Harbor.  On April 18, 1942, Lt. Col. Jimmy Doolittle led an all volunteer group 80 men launched 16 B-25 bombers from the USS Hornet and struck Japan.  Because a Japanese fishing boat detected the carrier group early, the crews launched early, which weakened their already compromised range, and prevented them from landing safely on Chinese airfields as planned.  The crews bailed out or ditched their planes near the coast of China after running out of fuel.  Three men were killed in the raid, and eight more would die in Japanese POW camps.  Miraculously, most of the crews were eventually rescued and safely transferred back to the US by the Chinese. 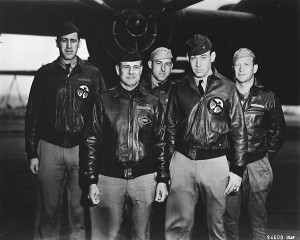 The crew of aircraft 1. Doolittle is second from left; Cole is second from right. Check out the “Thunderbird” logo on his jacket and compare it to the one in the portrait above. (USAF Photo)

It was an incredible feat for a number of reasons – chief among them, the fact that they used Army bombers, which were not designed to take off or land on an aircraft carrier.  The men on the mission were not told the details of their target until the Hornet was steaming toward Japan.  Even though the common thought was that it would probably be a suicide mission, no one backed down and all volunteered to continue.  Although the raid didn't inflict series damage on the Japanese, it was a huge morale booster for the Americans.  The raid had an additional benefit:  the Japanese islands, once thought to be safely out of range of American attack, were shown to be vulnerable, thus Japan would need to hold back key defense forces to protect their homeland for the rest of the war.

There are five living crewman remaining from the raid:

I'm always excited to photograph notable pilots, and I knew that Dick Cole, Jimmy Doolittle's co-pilot during the raid, lived in Comfort, Texas, near San Antonio.  I thought that perhaps with the 70th anniversary of the raid coming up next year, that it might be a great opportunity to photograph him with a B-25.  I thought that I could probably arrange to photograph him in Texas with help from the CAF (Commemorative Air Force).  After making some phone calls, I found out to my surprise that three of the remaining five raiders would get together at the Florida International Airshow in Punta Gorda, Florida for an airshow, and that it might be a great opportunity to photograph them together for the magazine. 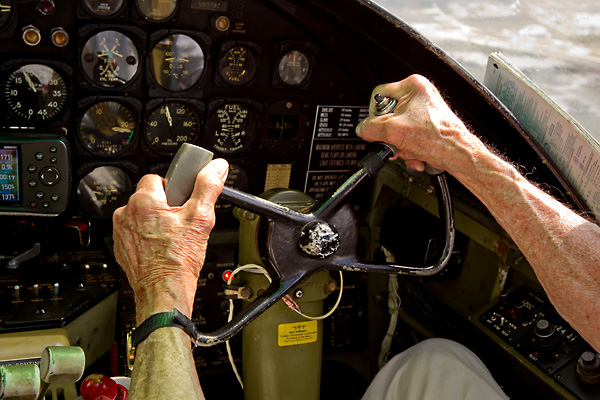 Upon arrival, I found out that Dick Cole was going to meet up with Larry Kelley, the owner of the “Panchito” B-25, and fly in his airplane from Sarasota to Punta Gorda.  K.T. and Syd Jones, along with Matt Jolley from Warbird Radio were crewing the plane with Larry, and were kind enough to make arrangements for me to make the flight with Col. Cole.  Space was tight inside the plane, but through their generosity, I was able to take one of their seats in the main crew compartment and photograph Col. Cole's experienced hands taking the yoke from the right seat of the B-25.  At 95, he was as smooth as ever, and it was an incredible experience to know that we were being flown around by Doolittle's co-pilot! 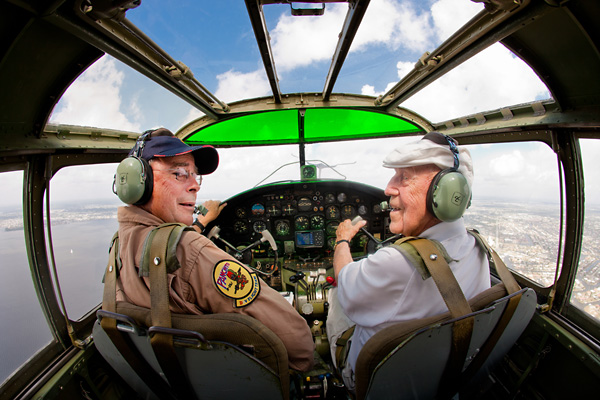 With fabulous support from my editor at A&S, and incredible support from this tight-knit warbird community, we were able to pull off a once in a lifetime sunset photo shoot the next day with 3 of the Raiders and a B-25 very similar to the one they flew to Japan in 69 years earlier.

Fellow photographers and good friends Brian Blanco and Chip Litherland assisted me on this dream  assignment.  Chip and I used Lighttrac, an Ipad app, to determine the optimum position of the plane at sunset.  Once we determined our position, Larry graciously provided his airplane as our iconic backdrop and allowed us to tow it into the perfect position for the evening shoot.  The airboss and ground crew at the airport actually shut down an active taxiway to provide us with the perfect angle, far from the other planes on the ramp.  Tom Casey, who runs the Raiders charity organization, and manages their appearances, delivered our hero subjects at the right time, and arranged for us to borrow an authentic copy of Cole's WWII era leather jacket.  K.T. Budde-Jones and Syd Jones, who work with Stallion 51 in Kissimmee, Florida, pitched in and answered a million of my dumb questions.  Matt Jolley helped us out as well, and videotaped the shoot for Warbird Radio, a fabulous internet radio site, with tons of interviews and information  on pilots and planes. 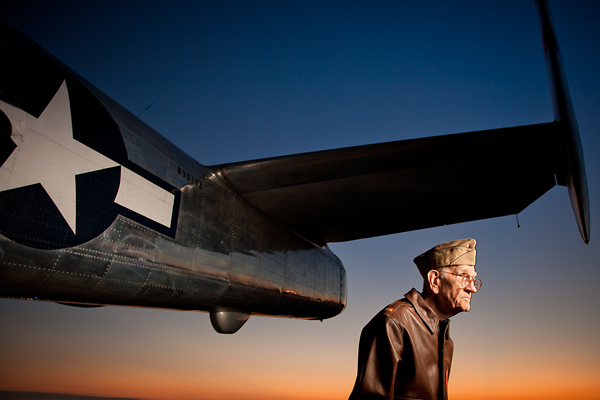 We photographed the group together in their Doolittle insignia blazers, and then photographed each Raider individually.  Col. Cole looked great in his WWII era A-2 leather flight jacket.  We kept the lighting simple, utilizing an easy corner lighting setup with two softboxes. For Griffin, we used a Plume Wafer 100 and some ridiculously low shuter speeds to try to capture what little ambient light we had remaining.  Because we had a cloudless sky, it quickly became very dark, and we photographed SSgt. David Thatcher  in almost complete darkness.  Chip backlit Panchito's nose and canopy with the Wafer 100, and we used a large Hexoval for Thatcher's  face.  We used Profoto 7B's and Profoto Acute 600 battery powered strobes, since we were out on the taxiway far from any sources of AC power. 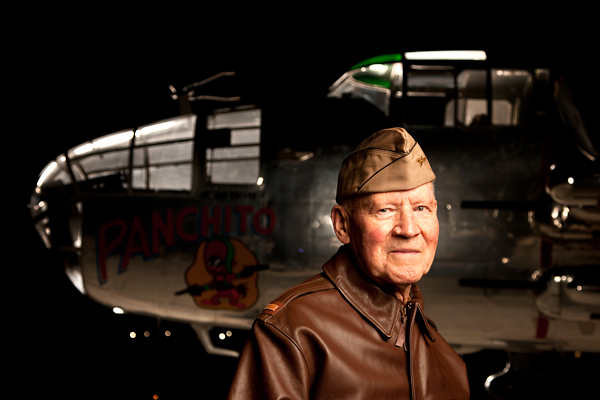 One of the highlights for me, was a bit of audio on Matt's video of the shoot.  Dick Cole is a very laid back, humble and classy guy.  If you met him on the street, you would never know that he was a famous pilot or war hero.  Matt asked him on camera – ‘what do you think of all the fuss?'  Cole quickly came back with, “the water-boarding is next?”

The lead time on the story was several months, but they've finally been published and now I can share them here.  It was a real treat to photograph these heroes, and it wouldn't have been successful without the help of my Florida colleagues and good friends in the warbird community.