All Hands on Deck: Photographing a kayak in motion 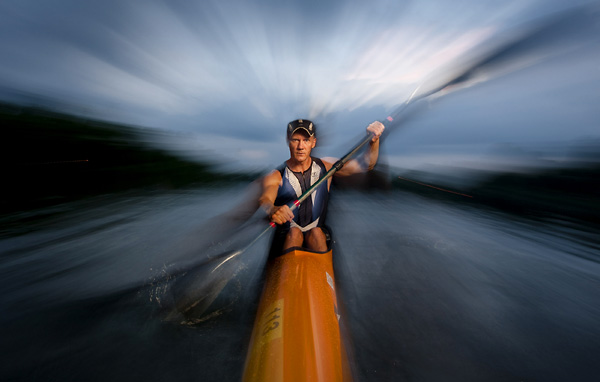 The final image of Brad Pennington speeding through the water.

Recently, I worked  with champion marathon kayaker Brad Pennington.  I've shot many athletes in my career……and many are absolute tops in their respective sports, but you have to be completely blown away by a 43-year-old guy who set a course record in the Yukon River Quest by paddling (yes, paddling) his super skinny racing kayak 460 miles in 44 hours, 14 minutes.

Most people think kayaking is all about having giant shoulders and arms, but in fact, it engages the core muscles more than most people would realize.  If you sat in Brad's boat, you would turn over almost immediately and fall into the water.  My assistant, Nathan Lindstrom, a very agile and athletic guy, who rock climbs regularly,  had a pretty hard time keeping the boat upright, and he ended up in the drink.  Brad offered me a chance to sit in the tippy vessel as well, but I politely declined.

I planned on photographing him paddling towards the camera, in motion, with a slow shutter speed capturing some movement in the background.  I had done a similar picture with a bicyclist at a velodrome before, with the camera attached to the bicycle: rider frozen with strobe, but with the background completely blurred in motion. 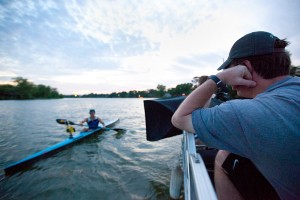 I talked to Brad about mounting a camera on his kayak, with a wide angle pointed back at him.  I made arrangements to rent an SPL surf housing and a Canon 5D MkII for the shot (we decided that a Canon EOS1DsMarkIII would be too heavy and unstable.  Assistants Todd Spoth and Nathan Lindstrom drilled a hole in one of Brad's older kayaks, and we then mounted a small ballhead to the bow and attached the housing/camera.

We set up our lighting equipment on another boat (a party barge, with a large flat deck), and had Brad follow us, slightly off to one side.  although the lighting worked great, and the Pocketwizard Multimax triggered everything perfectly (inside the housing), what we found was, that the top of the kayak was just too thin to support everything in a stable manner.  The thin hull, although mounted securely to the ballhead, still allowed the mounted camera and housing to buckle like a plastic bottle, allowing the camera to flop back and forth.  Brad makes constant adjustments, using his balance (and core muscles) to keep the kayak upright.  With a slow shutter speed, this resulted in a lot of undesirable side-to-side motion blur, rather than the linear motion blur we were hoping for.  There were some good frames, but again, it was not the picture I had originally envisioned.  While I had the housing, I tried some other “waterline” shots with Brad and his kayak. 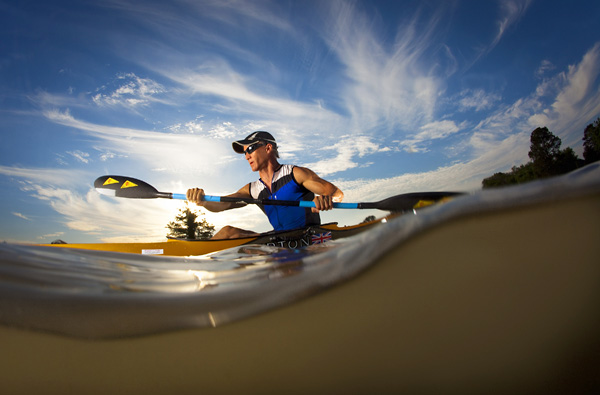 It was clear that we needed to somehow have the kayak and camera on the same platform, moving at the same speed through the water.

I decided to reshoot on another day.  In the interim, we explored building a camera rig for the kayak, almost like a Hollywood style car shot, but eventually we settled on strapping the kayak to the barge using nylon webbing and rubber pads to provide friction and to protect the hull.

After trying in vain to secure Brad's kayak to the barge (there was no way to do it without scratching or otherwise damaging the kayak), we finally realized that we could essentially tow him through the water with very little effort.  Because there were no eyelets or holes to tie a line to, Nathan laid down on the stern of the barge and held on to Brad's kayak as we towed him through the water.   Brad paddled some, but mostly to keep himself balanced and upright, as Nathan held the bow in place, between the pontoons of the barge.  As strange and low tech as this sounds, it worked quite well. 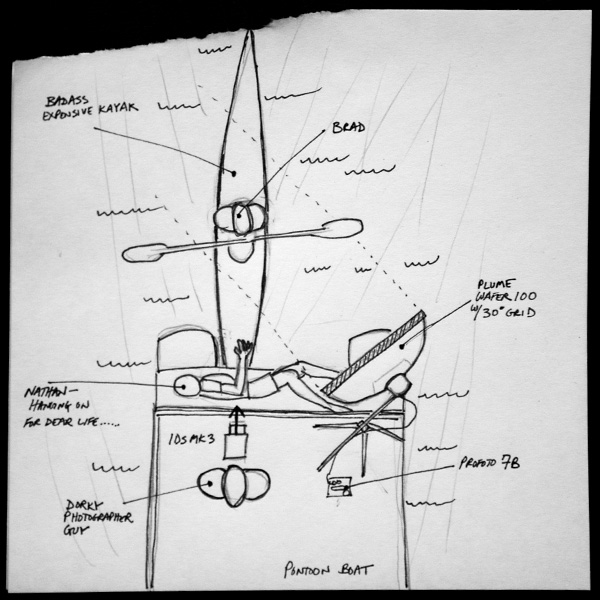 Torn from one of Leonardo's notebooks, obviously.

Our light source, a Profoto 7B, with a Plume Wafer 100, was mounted on the deck of the barge, off to the side opposite the kayak.   We tried out a new product from Lighttools, the company that makes Soft Egg Crate fabric grids for softboxes.  We used a 30 degree grid in the Wafer 100, to limit spill and concentrate most of the light on Brad instead of the kayak and water……not an unusual setup, but this time, we added a Lighttools Stretch Frame.  The Stretch Frame, consists of collapsible poles covered in velcro, which mount inside the softbox, providing a rigid frame for the grid.  This eliminates sag, and keeps the openings in the grid fully stretched open, which was critical on a moving, windy boat deck.  I was skeptical when I first heard about these, but they actually work really well, and are now a permanent part of my lighting kit.

I mounted my camera to the railing of the barge with a Bogen superclamp and ballhead, directly over Nathan's head, but eventually switched to a handheld shot so that I could manually keep Brad's head in the center of the frame while we were moving.  although I normally wouldn't have done this, I zoomed the 16-35mm lens ever so slightly to accentuate the motion of Brad coming toward the camera. 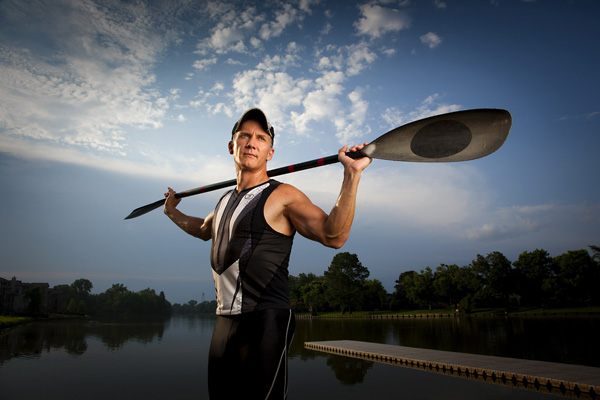 Portrait of Brad, taken with a Plume Hexoval 180, (rimlight courtesy of the Sun).