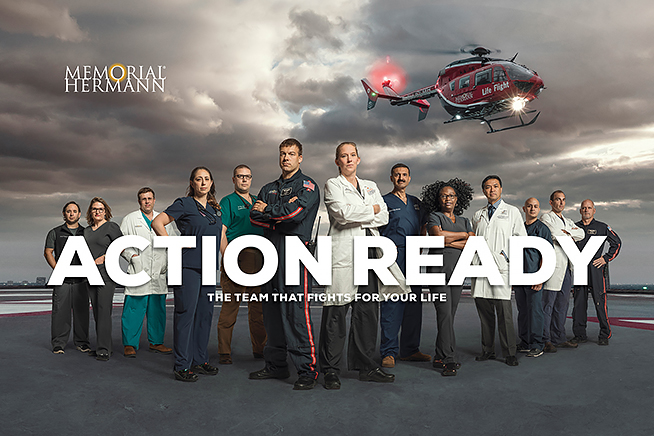 The finished piece, designed by Pennebaker and retouched by Avenue Sixty7 in the UK.

Earlier this year, we worked on a very cool project for the Memorial Hermann Foundation.  Memorial Hermann is one of the largest healthcare providers in the area, and they pioneered the use of helicopters in emergency medicine.  “Life Flight” as it became known, was the brainchild of the Dr. “Red” Duke of the Memorial Hermann/UT Health Science Center.  I had the honor of photographing him with a Life Flight helicopter a few years before he passed away for an editorial assignment.

Sometimes editorial assignment lead to commercial gigs, and it when it came time for a fundraiser for the Memorial Hermann Foundation, I was lucky enough to get the call to recreate the feel of that photo, albeit with a much larger group of people.

We worked with a stellar team of creatives at Pennebaker, including Halina Dodd and Stacey Hodge. Many ideas were tossed around during the planning stages, among them: taking a group shot on the helipad of the entire Life Flight team (over 100 people!), helicopters parked, a helicopter hovering in air over their shoulder, among other ideas.  In the end, we opted for a representative sample of members of the Life Flight team:  a nurse, a pilot, an ER trauma doc, etc….to show all the different folks that make the program work.  The goal was to make a “Heroic portrait” ,movie poster-style featuring a selection of the Life Flight team.

If you’ve ever been around helicopter operations, you know that taking a group shot of one person, let alone 13 people, can present quite a challenge on a helipad with the rotor wash of helicopter blades.  Add to that, uncertain winter weather, uncertain helicopter schedules (they can be called away on a real mission at any moment), and a windy helipad located many floors up on top of a high-rise hospital and you’ve got a very high possibility of failure.

Despite my desire to “nail it in camera” in one shot and avoid composites, it was obvious that this was not a plausible or safe scenario in which to photograph a large group of people with a ton of lighting equipment.

The solution:  A 6am group shot inside the hospital combined with plates of the helipad, helicopter, and sky.  John Lewis, Travis Schiebel, and Michael Klein agreed to help us on the shoot day with a ridiculously early 4:30am call time.  I bribed them with promises of a giant diner breakfast after the shoot. 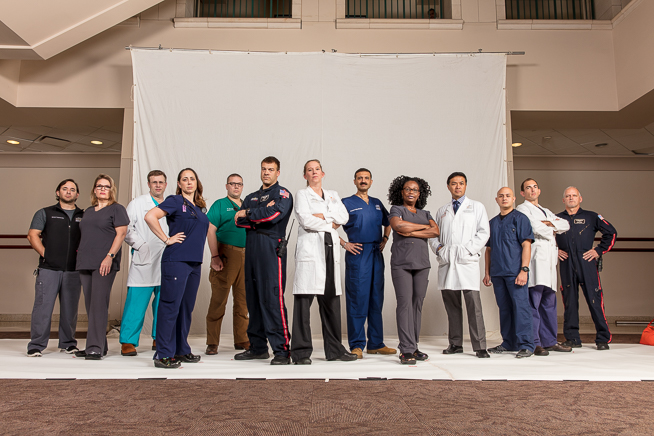 Reference group shot with a 24mm wide angle for the retoucher.

Individual shots from the same height/perspective with a longer focal length (105mm).

We knew one of the final uses of the photo was going to be a poster, so we wanted a super high resolution image.  We used the 50 MP Canon EOS 5DS for the job.  After nailing the arrangement in one frame (mostly as a reference frame for the retoucher), we kept the camera in the exact same position, then turned the camera vertically, zoomed in, and photographed the group in smaller pieces of 3-4 people at a time.  The lighting setup  (We used Profoto B-4 packs and heads, and a Plume Wafer Hexoval 180 as the main light source), and 20×20 white background were both rolled on large high-roller stands left to right in front of each smaller group of 3-4 subjects to maintain the same lighting look on everyone.  When pieced together with the background elements, this yielded a huge final file size. 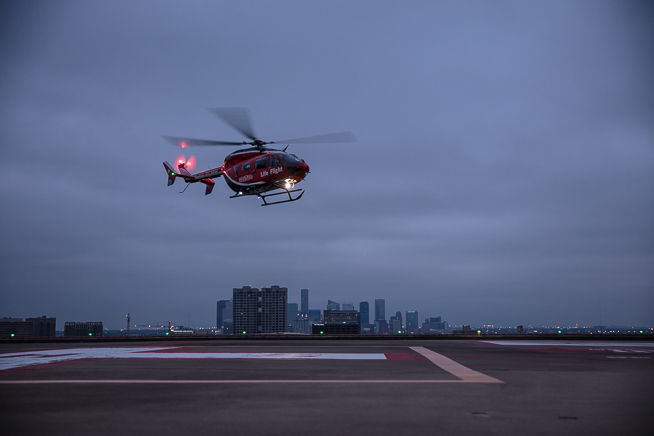 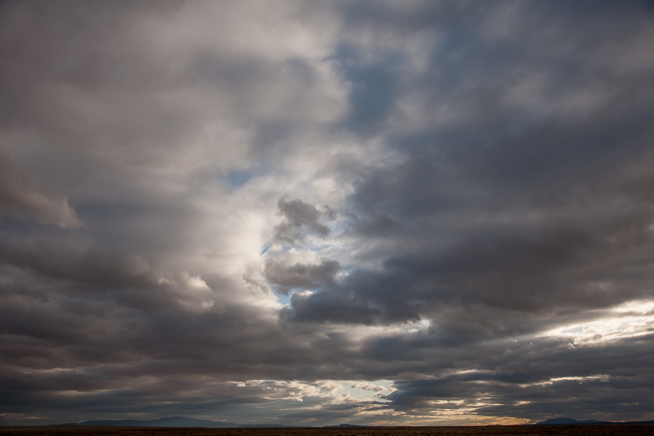 The clouds/sky plate, from an earlier shoot in New Mexico.

We also used a rental special effects wind machine to blow the subject’s hair and lab coats to make it look as if they were really on top of the rooftop helipad.  In reality, the rotor wash would have caused hair to go everywhere and for everyone to freak out rather than holding a steady hero pose.

I went back on a separate day to photograph a helicopter hovering on the helipad at dawn, and the concrete helipad.  We used an existing photo I had of a stormy gray sky as the background plate.  All of these elements were brilliantly fused together into a believable final composite image by Craig Roberts and his team at Avenue Sixty7 in the UK.  I love the foreground/background scale of the different subjects. We really wanted that look, with some of the subjects much closer to camera and Craig made it look great.

At the end of the project, our foundation client was pleased, the poster was a big hit, and we came away with an exceptional image that was the result of an entire team of people working together beautifully! (Larger version of the poster tearsheet here on my website).

Here's the final shot without the graphics.