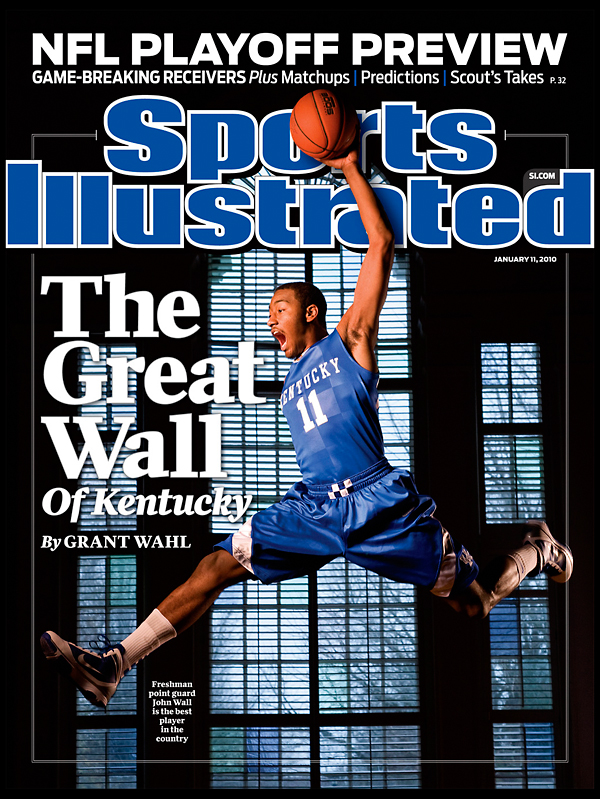 The cover shot from inside Kentucky's Memorial Hall

I recently had the good fortune of a great assignment in Lexington, Kentucky.  I was sent there a couple of days after Christmas to photograph one of the top college basketball players in the country, John Wall, for Sports Illustrated. 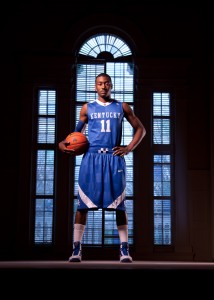 My charge was to photograph Wall on the Kentucky campus in an iconic and easily recognizable setting.  Lexington is an absolutely  beautiful area, but the horse farms, race tracks (Bourbon distilleries?…..just kidding.)  and the like were out due to the limited time we had with Wall, and oh yeah….it was about 24 degrees, completely overcast, snowing off and on,  with 20-30 mph winds that day!

We couldn't use Rupp Arena either, as the team was practicing throughout the day, and the women's gym (the old coliseum) was being set up for a gymnastics event.  I found a nice expanse of three large glass brick windows (the outside wall of an old swimming pool) on campus, but alas, it had been divided into classrooms/study halls for the athletic department tutoring program.  Ugh!  Most of the buildings with character  on campus were closed for the holidays and we were quickly running out of options.

It's tough trying to come back with nice pictures, when you have very little to work with in the background department, but it's also the most common problem most photographers deal with.  When pressed, I can take a 6-10 foot sliver of just about anything and make a passable shot.  I was just about ready to stage the shoot in a practice gym, or a locker room hallway….hell, even a stretch of solid white concrete wall was looking pretty good to us at that point!

Fortunately, with the help of the Sports Information Director, we were able to convince a campus guard to let us access Memorial Hall, a grand old theater/church-like building on the campus.  Anyone who is familiar with Kentucky knows this building, which is a memorial for soldiers killed in WW I, and dates back to 1929.  During our scouting trip the night before, our plans were just to utilize the signature building in the background of some of the shots (although we knew we would have to work fast due to the weather conditions).  When we got inside, it was obvious that the stage, with the cool arched windows in the background, could make a great and very graphic shot. 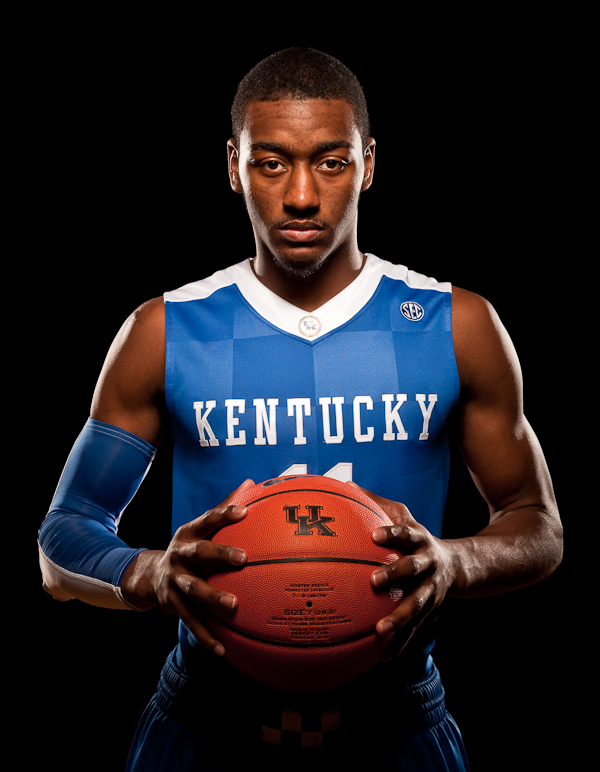 Black background, with the gridded Wafer 75 high on a boom, right in front of the subject

We had to make the most of our 35 minutes of alloted time, so SI assistant Andrew Loehman and I  quickly went to work inside, setting up lighting gear in a central location around one spot, so that Wall would not need to move much at all.  Since we originally planned to be outside on the campus, we brought Profoto 7B packs and heads for the assignment.

For the black background-tight shot we used a Plume Wafer 75 directly over and in front of the subject's head on a boom, with a Lighttools 30 degree fabric grid to limit the spill. The rim-light was formed by  two lights with regular reflectors and makeshift snoots from behind the subject on each side..  We intended for the background to go completely black, but since we were working in a white room with no black background, I placed a black reflector disc behind the subject's head, in the event that background retouching was required (so there would be no issues with selecting hair). 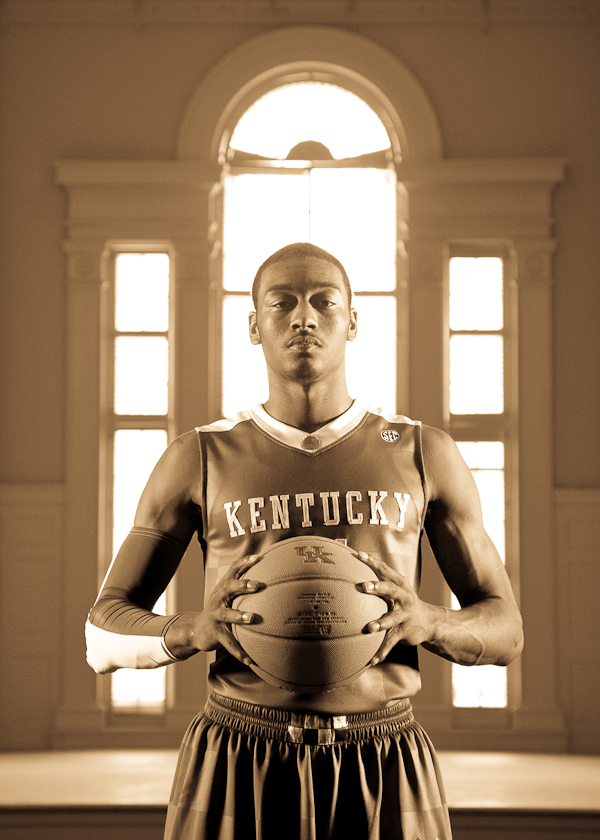 Sepia shot from the middle of the hall

For the full length shot, we used a Plume Wafer 100 with a 30 degree grid, high and to the subject's right, and a Wafer 75 with 30 degree grid from behind on the left side of the subject…slightly lower.  This formed a simple crosslight effect, and the grids kept the white walls of the room in check.  I would have preferred using a larger light source for both of these, but the smaller boxes with grids were really the only solution to preserve the effect of the dramatic window in the background.  We added a full CTO gel to the strobes so we could shift the overall white balance  cooler, making the subject a normal skin tone color, but the window light slightly blue.  For this shot, we did tight and loose static poses, and then just before moving on, I asked Wall to do a few leaps for me.  He obliged with a few dramatic spring-loaded jumps.  One of these was eventually selected for the cover.

Next, we quickly moved forward in the seats (about 20 rows back) to  create a higher-key portrait from the middle of the hall (which I converted to black and white).  Then we had John change into his warm ups (not for sartorial reasons, but  for warmth), and sprinted outside with one light and a Plume Wafer Hexoval 140 (Plume's medium hexoval).  There we photographed Wall for 4 minutes or so at two different spots with Memorial Hall, with and without tungsten white balance settings.  On the tungsten shots we added a full + 1/4 CTO gel to bring the strobe back fairly close to daylight on camera.

Wall was a great kid to work with, and I'm hoping to photograph him again someday (probably soon), when he makes his next leap to the NBA.

Wall: outside in the elements with Memorial Hall in the background

All Photographs in this article are © 2009 Robert Seale.  All Rights Reserved.  Feel free to link to these, but do not otherwise use without permission.  Thanks.