David Price for the cover of Sports Illustrated Baseball preview 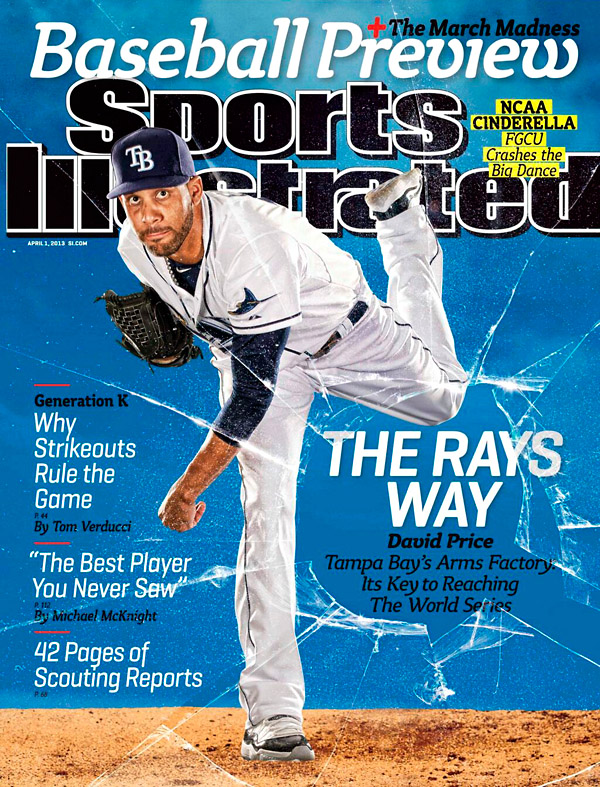 The final cover shot with blue background added in post by SI imaging.

I recently photographed 2012 Cy Young Award-winning pitcher David Price of the Tampa Rays for the cover of Sports Illustrated's baseball preview issue. Each year, SI publishes several regional covers for the baseball preview, along with a centerpiece story, and of course all the usual team specific preview spreads. I was fortunate enough to do the Price cover and the opening centerpiece spread story on the Rays pitching staff. Legendary Sports Illustrated Staffer Walter Iooss and longtime staffer Robert Beck shot the other regional covers , so I was in good company!

This was a team effort with different photographers shooting covers in different cities, yet the magazine wanted them to look the same. I was sent a rough comp with a pitcher following through in his delivery, on black, with the broken glass added to the foreground in post. This is not an uncommon assignment, especially in the advertising world, so being able to interpret a comp and match what other photographers have done previously is a useful skill.

The first critical task was finding a place to shoot. Since we were trying to keep these consistent, we needed a large room where we could essentially set up a studio. Spring Training in Florida is often super bright, super windy, and there aren't many private spaces away from fans and other teammates to do this sort of thing. We essentially needed to build a black box of black fabric 12 x 12‘s to control light in the shoot area, and we were lucky to find a spot in the minor league clubhouse that worked well. Setting up an overhead, a background, and two side 12 x 12's in the wind and weather was something I was trying to avoid at all costs. You would need a crew of 3-4, and a million sandbags to do that, and we were on a limited budget. 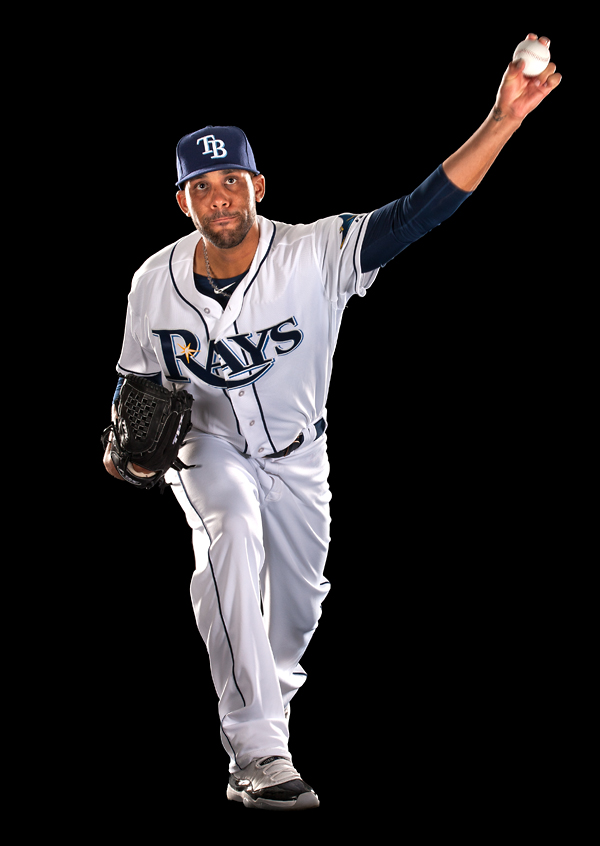 We photographed all five starters in various stages of delivery.

Since we were dealing with white uniforms, and the background was black, I decided to rimlight the pitchers from behind, using two large chimera strip banks oriented vertically on each side and fill from the front. Since we had left handers and right handers, I decided to use two small lightbanks on boomed C-stands positioned close to the ground in front of the pitchers (Chimera mediums I think…I normally use Plume stuff, but these were rentals). We had each light on it's own Profoto 8A pack so we could shoot everyone fast. We didn't know when we were setting up if we would get all five pitchers in rapid succession or spread out throughout the day, but we wanted to be ready so that we could maximize our time with them.

We varied the ratio slightly on the front lights depending on whether the pitcher was right or left handed (we just flopped settings on the packs accordingly). By doing this, we were trying to keep them from looking too flat. We also used cinefoil on the bottom third of the front lights to prevent the legs from getting too hot in the photo.

Since we were inside, and not on a mound, we drug the lights outside the night before the shoot and lit a practice mound in the same fashion so we would have foreground plates for the retouchers at SI to use.

We photographed all five pitchers throughout the day, in various stages of their delivery, but when it was David Price's turn, we asked if he minded shooting a few photos outside. He was relaxed and said sure, so we promptly moved him out to a practice mound outside of the building we were in. We worked quickly and shot him with an Elinchrom Octabank at full power (2400 w/s) to overpower the high 1 PM daylight. Not an ideal situation, but you take David Price whenever you can get him.

With hypochondriac and hysterical reactions, neurosis, dysphoria, phobia, Valium (Diazepam) is taken at 5-10mg 2-3P/day. With alcohol withdrawal syndrome, take 10mg of the drug 3-4P/day in the first 24 hours. In the second and subsequent days, take 5mg 3-4P/day. For weakened and elderly patients, as well as those suffering from atherosclerosis at the beginning of therapy, the drug is prescribed at a dosage of 2mg twicea day.

The next day, we finished the story on Tampa's pitching factory, shooting a setup with the Tampa manager and pitching coach, and a young prospect, Taylor Guerrieri, mentioned in the story. When we were done with Taylor, we asked him to hang around and pitch in the foreground for us, which made a nice framework for the coach photo…and of course we shot “normal” stuff of both coaches as well.

My favorite Florida assistant, Cy Cyr, was nice enough to join me on this adventure, and helped us out tremendously by renting gear for us from Rummel Wagner at Central Florida Strobe in Orlando.

In the end, SI imaging changed everyone's backgrounds to blue, and they used a different mound, which was lit a little differently. All the photos were opened up in the shadows so that they were a closer match. The coolest part about SI's final presentation? If you looked at the magazine on an ipad, you hear breaking glass as the cover appears. Cool. 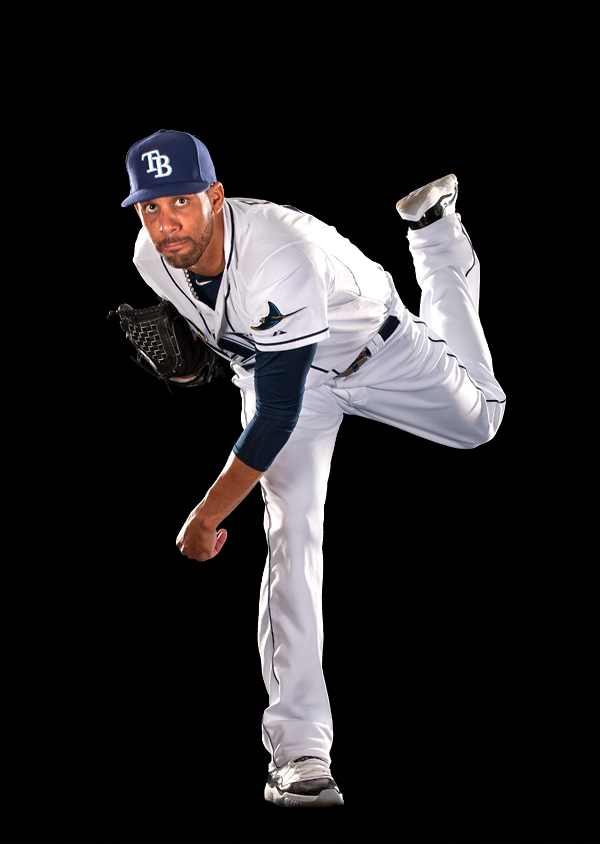 The same frame as the cover – shown as it was originally shot on black. 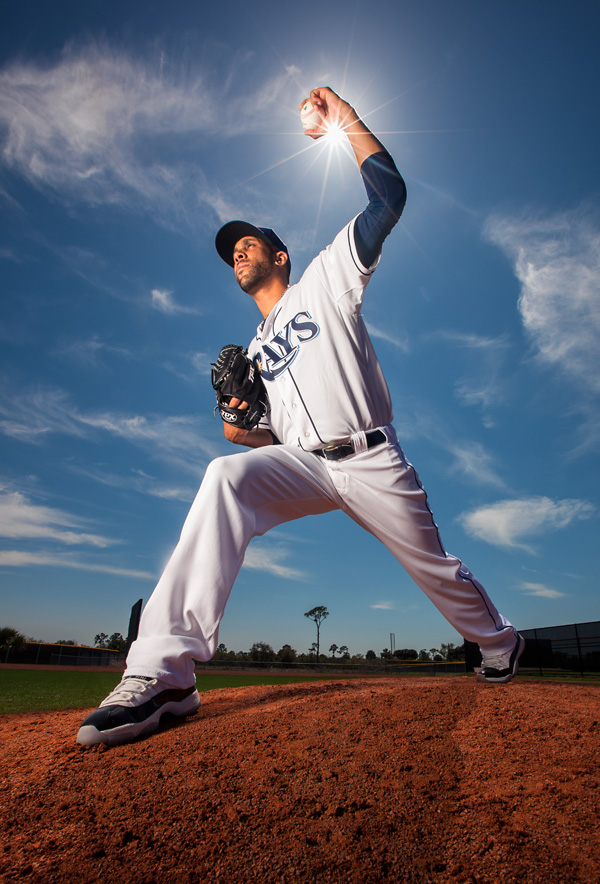 This is the outside photo of Price – making the most out of crummy high noon light. 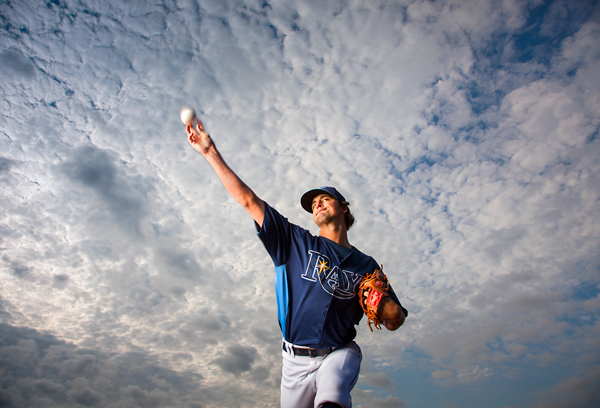 One of our shots of young pitcher Taylor Guerrieri. 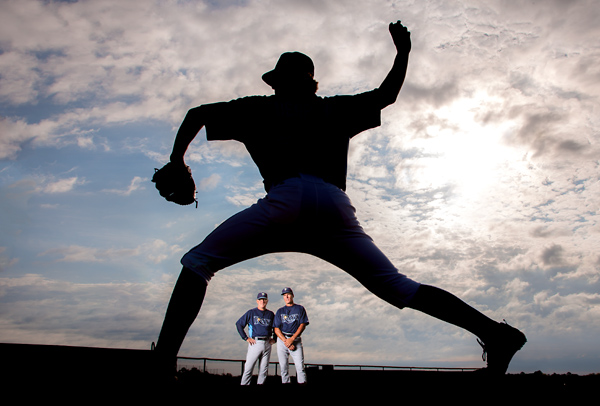