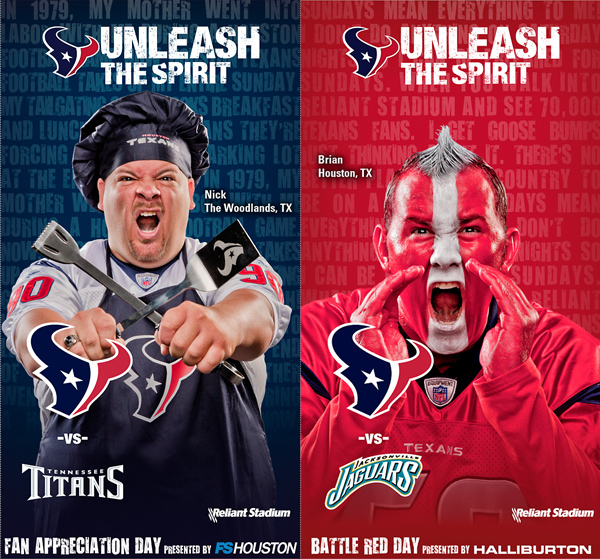 Last spring, I received a call to photograph stylized portraits of  Houston Texans fans.  The campaign concept was to honor the Texans season ticket holders by featuring a different season ticket holder on each 2011 game ticket.  The Texans held a contest called “Your Story-Your Glory” in which season ticket holders wrote in about their fan experiences.  The winning entrants were each featured on one of the tickets.  The winners ranged from the super rabid passionate face-painting guys, to a nurse who works her shift in Texans scrubs, a champion tailgater, to a soldier who watched every Texans game he could while stationed overseas, to a couple who were married in the Reliant Stadium parking lot.

I thought it was an excellent idea, particularly with NFL teams emerging from a post-lockout /strike situation.  I met with Laura Heidbreder, Creative Manager for the Texans, Jennifer Davenport, Director of Marketing, Designer Julio Guidi and several other members of their team and they outlined the concept and art direction behind the shoot.

On the shoot day, we actually set up on the floor of Reliant Stadium (sans grass), and set up a large grey studio backdrop.  We kept the background neutral, because Laura and her team were going to drop out the photos and use a variety of different colors/type treatments behind the portraits.  We used grey instead of a plain white, to allow for the rim-lighting effect, which would have been hard to select on a white backdrop.  We lit the set with two Wafer 100 softboxes with Lighttools grids to create the rim-light effect.  A large Wafer Hexoval 180 was boomed over the center of the set to light the fan's faces.  A video crew was also on hand to interview each fan for possible TV spots.

With the help of assistants Nathan Lindstrom, Travis Robertson, and stellar Houston makeup artist Wendy Martin, we set up for the shoot and welcomed each fan, at approximately 45 minute intervals throughout the day.  It was a lot of fun trying to elicit crazy screaming reactions from the fans, basically recreating their passion from an actual game, in an empty stadium.  It was really a blast, and made for a very fun work day:  lots of laughing, lots of great expressions and great pictures.

Laura and her creative team then went to work, selecting the final images, and designing a fabulous set of tickets.  The Texans held an unveiling on July 19th, once the lockout had officially ended.  They also unveiled a TV commercial with each fan, based on video interviews with each fan on the same day as our still shoot.  I think she did a great job, don't you? 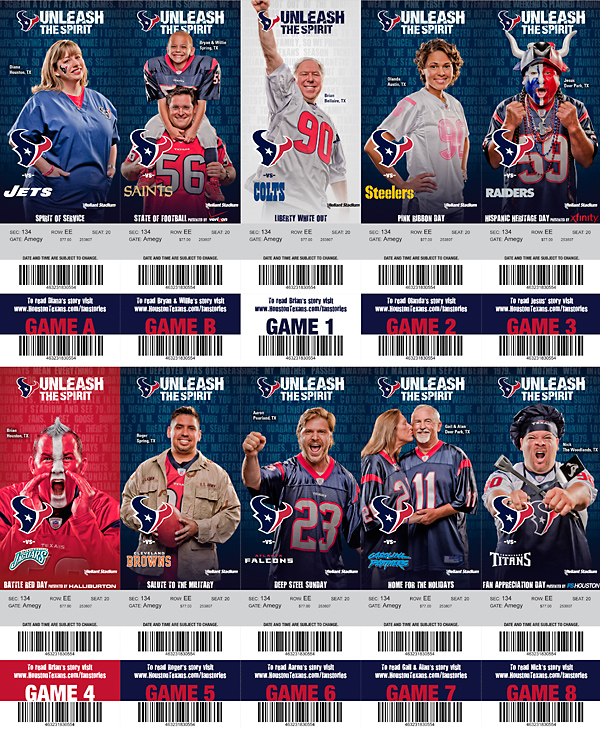