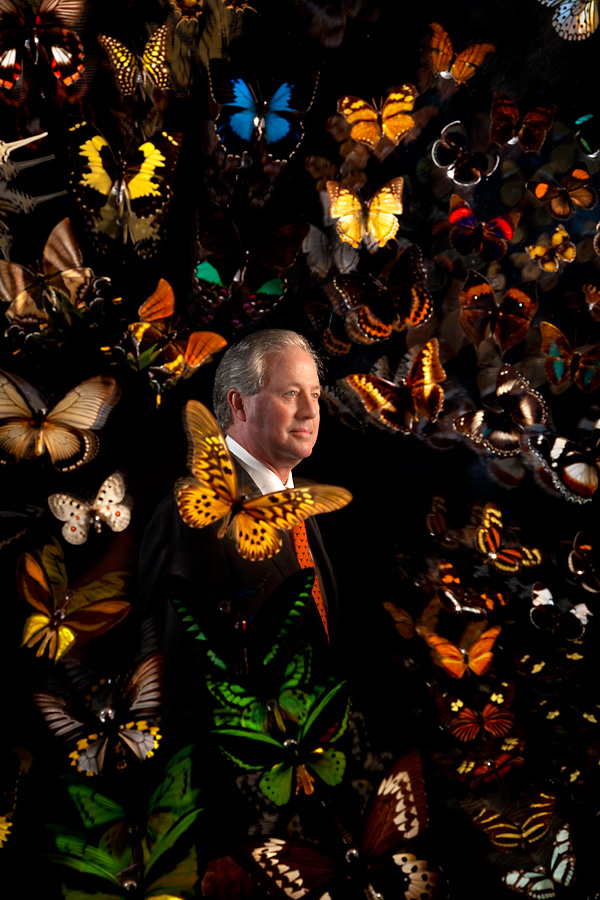 Ernest H. Cockrell with a glass butterfly display in the foreground.

As a corporate photographer, I'm called upon to do executive portraits of  CEO's and local business leaders.  Ernest H. Cockrell is a longtime Texas energy business executive  who is also very well known in his hometown of Houston for his philanthropy.  Over the years he's given millions of dollars to a number of causes, notably the University of Texas (his alma mater), and the Houston Museum of Natural Science.

Most Houstonians recognize the Cockrell name from the namesake Cockrell Buterfly Center, a giant glass annex to the Houston Museum of Natural Science, built several years ago containing a tropical butterfly habitat, rain forest, a 50 foot tall waterfall, and thousands of butterflies.   After receiving a commision to photograph Mr. Cockrell for the University of Texas, I decided that this would be the perfect location for his portrait.

He had very little time on this particular day, and one of the things I'm very proud of, is being able to create several different scenarios in the same location without making the subject wait around on us to move lights and change our setup.

Although I fully planned on shooting him in the rain forest habitat, hoping to get a few butterflies in the picture, I quickly found another area in the children's educational center of the museum, adjacent to the rain forest that offered some interesting but challenging visual possibilities.

We had a very limited amount of time (about 15 minutes), so I chose an area where we could get several shots in one location.  A large wooden display inside the educational area contained  2 large vertical pieces of glass which contained a static display of  butterflies who had generously donated their bodies to science.  The space was tight, with interactive displays for kids, a weird corner wall behind the display, and built in stools for children everywhere.  I thought that we might be able to light the butterflies, and shoot through the glass, placing our subject's face on the other side of the glass wall.

After tinkering with the lighting and composition, we decided to backlight the butterflies from each side behind the glass, and we maneuvered a Plume Wafer 75 with a Lighttools 30 degree grid into place outside of the visible frame as the subject main light to reduce spill onto the glass.  We used grids on the two backlights (a 20 and 30 degree, as I recall), and the left backlight conveniently served as a hair-light for Mr. Cockrell.  Rosco cinefoil was used to gobo the backlights and prevent flare.  The background was a corner wall, and was very close, so my assistant, Nathan Lindstrom was put in charge of holding a 6 x 6 black felt Scrim Jim in place behind our subject to give us a nice black background behind the multi-colored butterflies.

The space between the glass panes was quite wide, and reflections around the butterflies were an issue, so much so, that I toyed with retouching reflections in post.  I finally settled on leaving the photograph as it was originally shot, after deciding that the reflections actually added a feeling of motion to the picture – almost as if we had used a slow flash sync with actual moving butterflies. (“Yeah….I meant to do that….”) 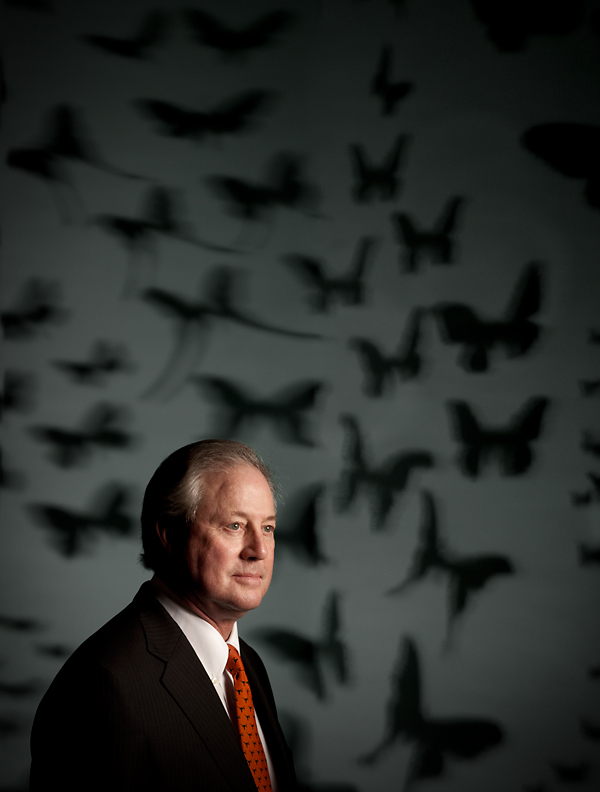 The second shot with the butterfly shadows on the wall.

The second picture was created by utilizing a small section of our cramped corner wall.  We set up another light with a snoot to narrow the flash to a very small beam, and placed it about 20 feet away from the glass, at a slight angle to the wall.  This created a pattern of distorted butterfly shadows on the background.  We turned off our background lights from the last picture, and removed the black Scrim Jim from the set.

We had Mr. Cockrell step about 2 feet to the side to get him away from the snoot spotlight which was creating our background, and we moved his Wafer 75 main light over a few feet to keep him (but not the background) lit correctly with the small softbox.  I then moved about 90 degrees and shot towards the wall, creating the shadow picture.  We did all this in about 10 minutes, utilizing our remaining 5 minutes just outside the nearby doors in the rain forest habitat where a third setup with a Profoto 7B was waiting. 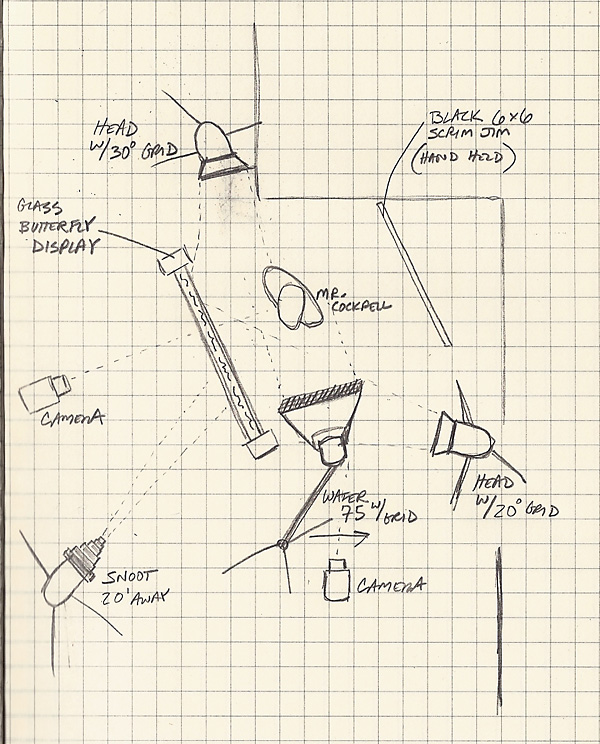