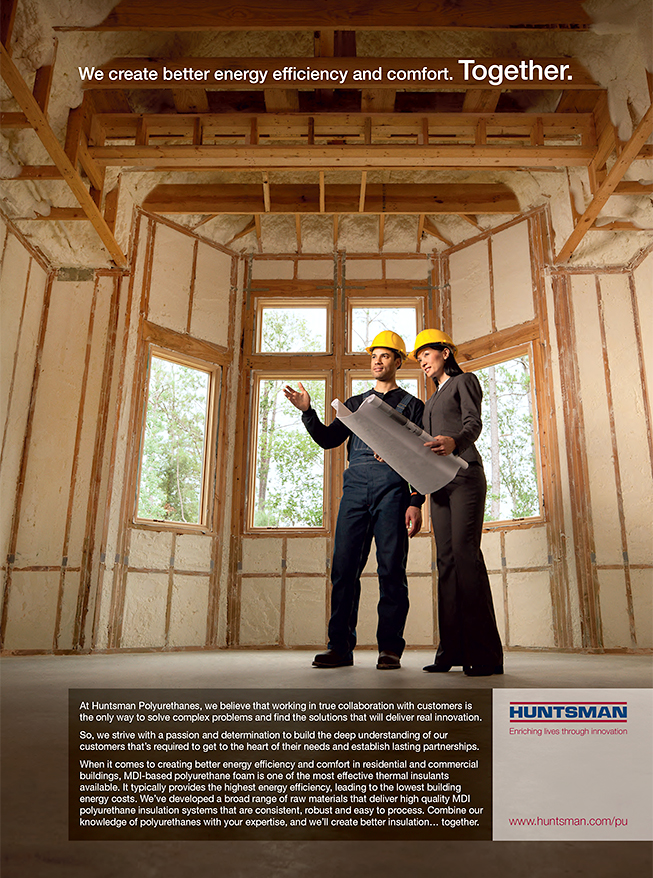 We’ve been fortunate to work on an ongoing advertising campaign for the Huntsman Corporation (HUN), a very large differentiated products company.  Huntsman doesn’t make products that you or I can buy in the store, but their products are everywhere…the foam in auto seats, insulation in buildings, even the soles of athletic shoes.

The challenge for Huntsman then, is showing what they do, without “selling” a specific product.  Their advertising is often BTB in trades within the industrial world, and the theme/concept for their ongoing campaign is collaboration between Huntsman and the partners who use Huntsman materials in their products.

To that end, I’ve done a few shoots for them, always collaborating with the incredible Chris Pearson, a British designer who really knows his stuff.  I’ll break down a few of the recent shoots I’ve done for them below:

In advertising photography, unlike corporate or editorial photography, you often get a very specific comp or brief.  In the old days, designers would draw the concept on paper, and after these were presented to the client, the advertising photographer was brought in to execute the idea.  These days, the comps are often “theme boards”, or “mood books” – multi page PDF presentations with a mixture of drawings, existing stock (to show mood or lighting style), and sometimes, full-on Photoshop illustrations made up of 10 or more individual photo elements….a background from here, a person from there, etc…with color changed to suit the designer’s vision of the final piece.  Sometimes there is room for collaboration and interpretation, and a good photographer always tries to give the designer what they want, but improve on the concept if at all possible.

For the first shoot, we needed to show a builder and a client looking at plans within an unfinished home highlighting a spray foam insulation product.   We used Plume Wafer 100’s with Lighttools grids on each person, lighting each model’s face.  We used a large softbox to fill the scene (very slightly) from above the camera, and a low shutter speed on a floor level tripod to open up the ambient light coming in from the window.  I used the new Canon 24 Tilt shift on this shot. (If you would like to see more lighting scenarios from previous shoots, you can find them here.) 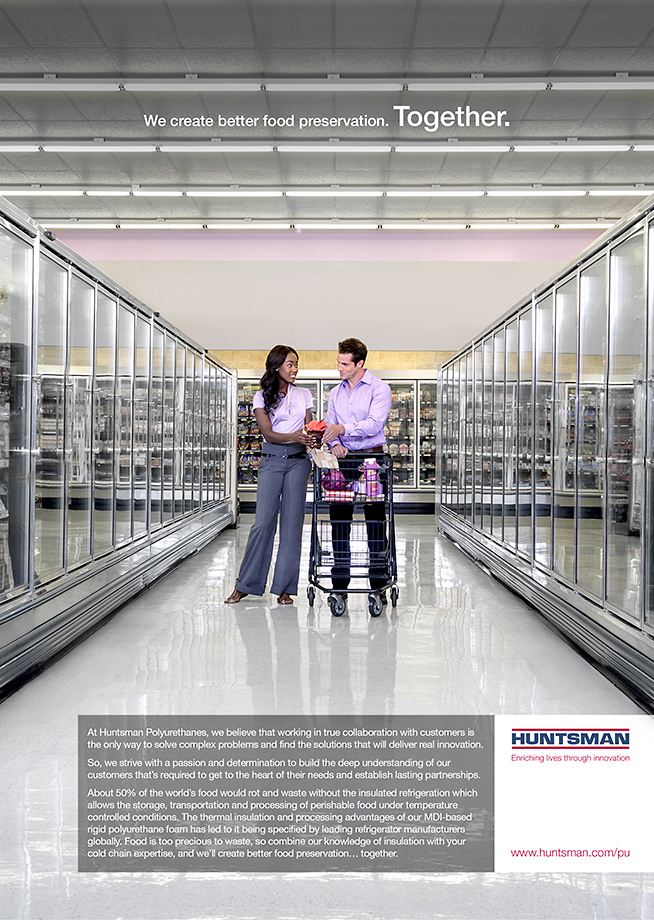 For the grocery store shoot, which was to highlight the insulation products Huntsman makes for commercial freezers, , we had to rent a large grocery store location after hours (the middle of the night!), and balance our strobes to the existing banks of fluorescents overhead.  It was a tough lighting situation, as the lights couldn’t show in the final picture.  We ended up using two large rectangular softboxes high above the camera on either side of the camera, feathered up slightly above level, and two Canon 580 speedlights inside the glass freezer cases on each side to pop a little fill on each model’s face.  A retoucher removed signage on the back wall in post. 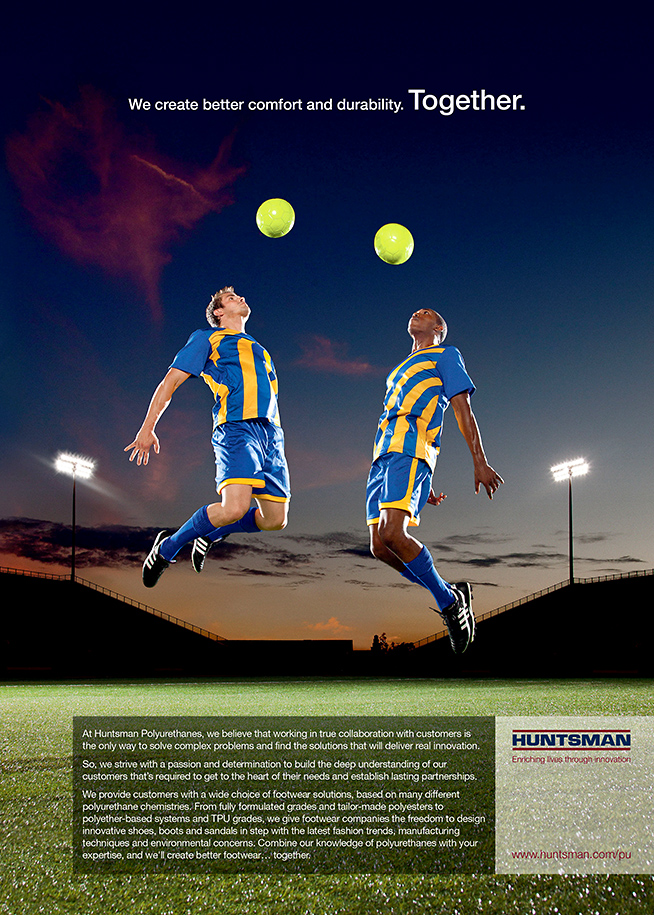 For the third shoot, we rented a large Texas high school football stadium to highlight Huntsman’s products used to create Adidas soccer shoes.  Since the theme, was one of Huntsman working together with other companies, the decision was made to show a couple of soccer players doing pre-game drills….working together on the soccer field.

Finding soccer players that looked realistic was a tall order for casting, but eventually, we found models with soccer experience, and we shot a series of drills that players might do together on the field – running, stretching, warming up, kicking a ball back and forth, and heading the ball back to each other.  Again, the emphasis was on teamwork – not competition, hence the identical uniforms.

This shoot was the most elaborate in terms of lighting.  We brought in three assistants for the shoot, and used Profoto 7A’s with Bi-tube heads and Magnum reflectors from behind the subject on high-rollers, 2 more 7A’s with large Plume 140 strip banks with grids from a slightly closer to side angle (still slightly from behind though), and a Plume Wafer Hexoval 180 feathered up slightly from high above camera.  We shot throughout sunset, and did enough takes to make the models really, really sore the next day!  A retoucher was able to duplicate the edge of the high school stands in the background and create a mirror image that made the stadium seem larger than it actually was.

In the end, the client was very happy, and we had a great time creating images for some hard to illustrate concepts. 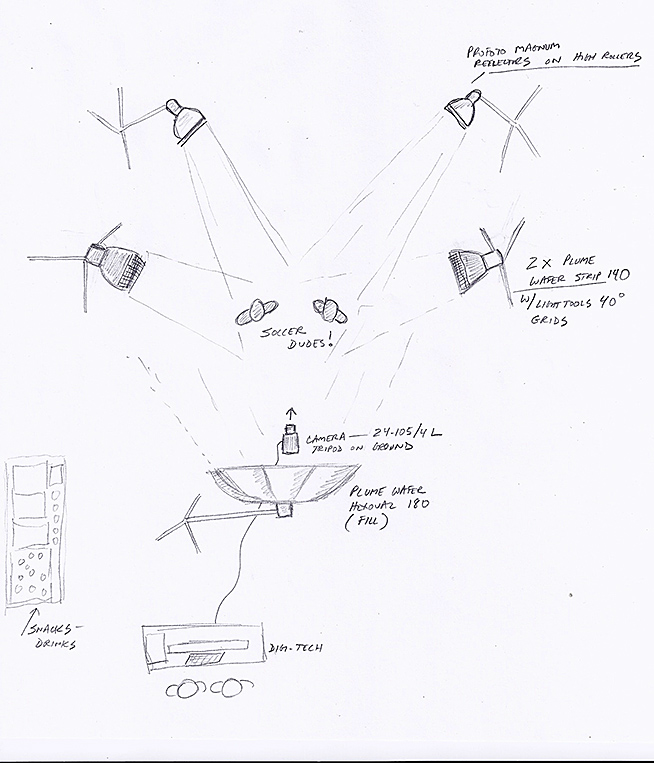 High-tech engineering schematic of the set…..drawn with pinpoint laser accuracy. 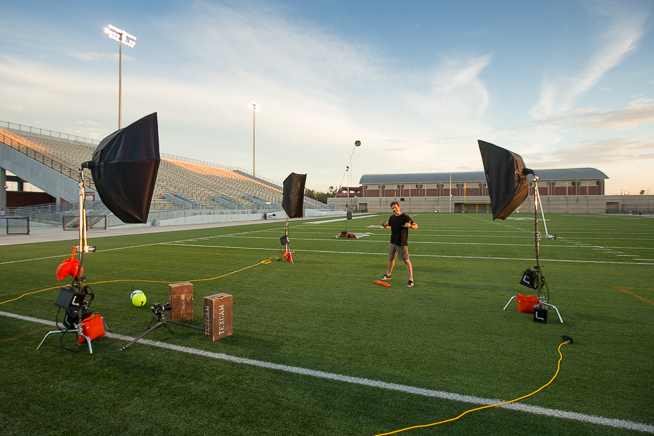 Behind the scenes set shot from the soccer shoot, showing assistant Andrew Loehman with the 5 light setup.