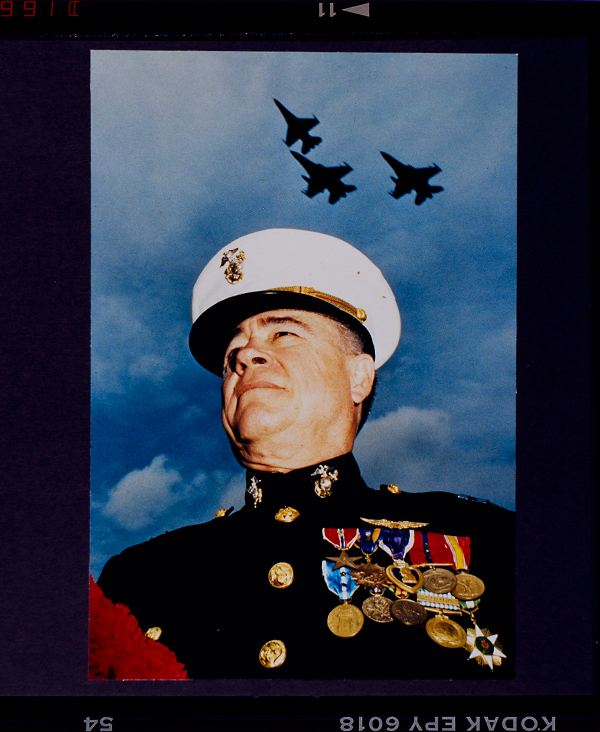 A copy slide of my first Chronicle photo. I was later asked if this marine died from radiation overexposure from my Metz 45 flash.

Twenty years ago today my career officially began as a professional photographer.

It all started with a pre-dawn phone call in the winter of 1992 from George Honeycutt, then Director of Photography at the Houston Chronicle (in those days, George worked from 6am-2pm, and I…..well, I did not).  Working as photo editor of the school paper and co-editor of the college yearbook, I was just getting to bed some mornings as George was showing up for work.  Anyway, the phone rings, and there's a gruff voice on the other end of the line, “Seale, you got any tickets?”

In those days, the Chronicle had great company cars, full size Ford Broncos, and they even issued one to the intern, so your driving record, not just your photo ability, was a consideration.

So with my unblemished driving record intact, I began one of the most formative experiences of my life:  a summer internship at the Houston Chronicle.

During the spring of 92, I visited the paper a couple of times, going on “ride-alongs” with staff photographers Howard Castleberry and Dave Einsel, who both showed me around the department.  Howard even offered to let me live at his house for the summer virtually rent-free, so I could be closer to the newspaper ( an incredible gesture, for which I'm very grateful).

There was nothing cooler than a big city newspaper, particularly one like the Chronicle in those days.  You parked across the street, then went through the press room up a freight elevator into the composing area (ah, the smells!), past the newsroom and into the photo department.  Each photographer had his own private darkroom (left over from the black and white days).  There was a community area where everyone got their mail, typed captions, and, at night – hung out and watched TV.  There was George's office, on the end, which reeked of 30 years of cigarette smoke, and then a beautiful studio, with lights mounted to the ceiling on rails.  There were two large community darkrooms:  A BW darkroom with two rows of Leitz enlargers, and giant trays in a center island, with the final wash tank going through a wall to the well lit office area.  The color darkroom, had fewer enlargers, a giant Noritsu machine to develop film (just like a one hour photo lab!), and a cool device called a Photovix, where you could view your negatives on a television monitor.  All the chemicals were mixed and stored in gravity fed tanks upstairs.  There were 4 full time printers on staff, because photographers were “supposed to be out taking pictures”….George designed it all.  Most of the staff wore blue jeans to work every day, and they all had these impressive arrays of police ID's, season credentials, and sharpies around their necks.  Everyone had police scanners, and two way radios in their cars.  They carried cell phones.  The Gordon Gekko kind.  It was awesome.

The Chronicle had hired their last staffer straight out of his internship.   I quickly got it in my head, that if I did a good job, that I too would be hired, either by them, or at the very least, by some other newspaper at the end of my summer there.  I literally did not take a day off for almost 4 months.  Even if it was my scheduled day off, I would troll for “wild art” or accompany other photographers on assignments, hoping to build a set of portfolio pictures good enough to land me a job.

My first day was supposed to be the Tuesday after the Memorial Day holiday.  All the interns (over 20 as I recall in all departments), were supposed to have a meeting in the managing editor's office and then go to lunch.

Being super gung-ho, and scrambling frantically to replace pictures in my portfolio, I decided to spend Memorial Day at the VA cemetery, photographing the ceremonies there, not for publication, but just to get experience and maybe make a portfolio picture.  Another photographer was already assigned and I wasn't officially working there yet.

After shooting my photos, I drove down later that night to the paper just to process film (a free Noritsu machine!  Free film!  Cool!).  While viewing my contact sheets on the Photovix, a copy editor walked by.  “These are great!”, he said….and pretty soon they had two of my photos mocked up for the next day's paper.  I was shocked that they were even considering my photos at all.

I was terrified at the time that the staffer assigned to the VA cemetery assignment was going to kill me the next day.  After all, he had turned in his assignment and I don't even think he knew I was there.  It was a touchy situation, I felt guilty, but I was lucky, he was congratulatory the next day, and became one of my good friends.  It was a very classy gesture to such a young insensitive punk. 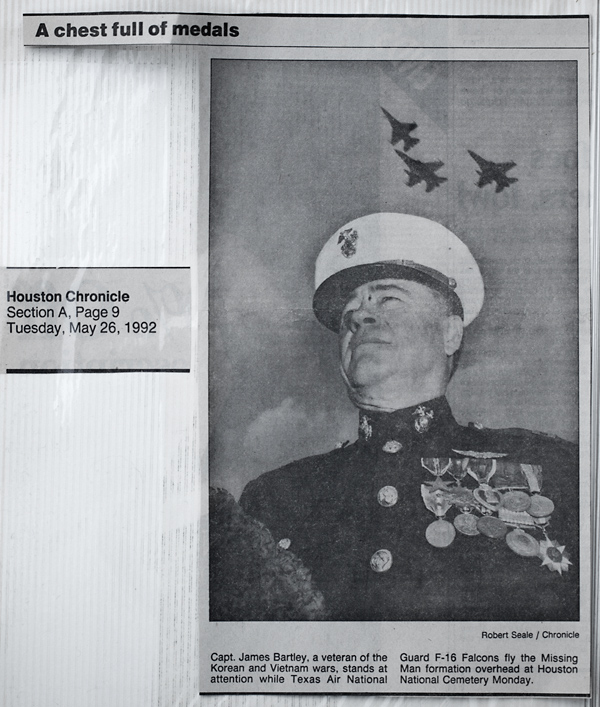 A clip, lovingly preserved by my best friend's mother, who made a scrapbook of every single photo I had in the paper that summer.

It was an awesome feeling to walk into that intern meeting on Tuesday with both section fronts.  They had run my photos, both verticals, as the main art on Page 1 and the Metro front.  Tommy Miller, the ME, a gentle, nice man who just passed away earlier this year, said something like, “well, I guess you don't need my help-keep up the good work.”

From there on George treated me like one of the staff, and continued to feed me good assignments all summer (much better assignments than I deserved).  He even kept me on for an extra month or so at the end.  George was tough – he was an icon straight out of the cigar chomping, fedora-wearing days of journalism.  He had been the NPPA photographer of the year early in his career.  There was no coddling or hand holding, just a quiet, intimidating presence.  He was like a football coach that you didn't want to ever disappoint.   I didn't get hired by the Chronicle, but I did land a job at the Augusta (Ga) Chronicle, and a year after that I was back in Houston working for the Houston Post.

The photos were not my best.  Certainly not adept at lighting that day, I had blasted one of the veterans  I photographed with a Metz 45 “Potato-masher” flash to bring the exposure of the sky down  during the mid-day ceremony.  Later in the year, my ego bubble was burst during a portfolio review at the Atlanta Seminar when the reviewer said, “Did this guy survive the radiation? – you blasted the shit out of him.”

I feel like I got in on the newspaper business just in time.  Digital photography was in its infancy, we still shot film, sports photography still required the skill of manual focus, and there were older guys, like Curtis McGee, still on staff who could tell you stories about the flash powder days.  I got to work with great photographers and learned a lot from guys like Buster Dean, Kerwin Plevka, E. Joe Deering, Steve Ueckert, Carlos Rios, Richard Carson, Paul Howell, Steve Campbell, and John Everett, each brought something different to the table.  The paper spent money and covered big stories in those days:  Dave Einsel spent several months doing a 40 page special section on Columbus' impact on the New World, and Castleberry  jetted off to Somalia to cover the famine and fighting there for over a month.  It was an incredible experience, and some of the wisdom and advice from that summer still resonates through my head daily.  While many of my friends graduated from college and went the assisting route, I was lucky enough to spend my summer at the Chronicle, driving all over Houston and getting to push the shutter button every day.

I shudder to think what might have happened had George not called me that winter morning in 1992. 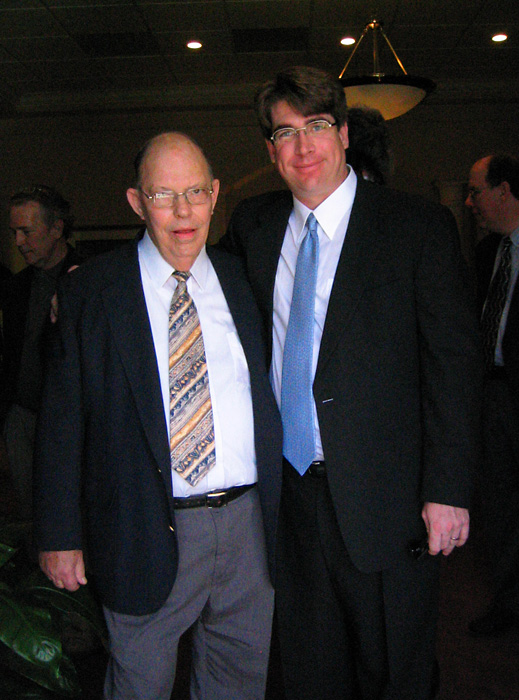 George Honeycutt and I at Kerwin Plevka's funeral in 2005. George passed away in 2008.