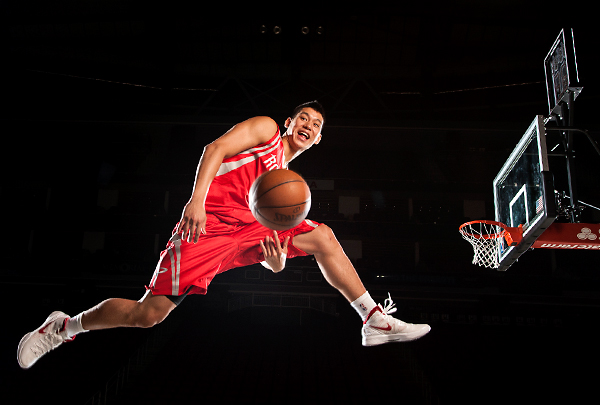 Jeremy Lin posing for a high flying pass on his first day back in Houston. This photo was featured as a double truck in Sports Illustrated. © 2012 Robert Seale

As Jeremy Lin was in the process of inking his deal with the Houston Rockets last week, I got a call from Sports Illustrated.  Often in sports, when a star player is traded to another team, there is a big fancy press conference to introduce the player to the media.  Usually the player stands at a podium with the new owner, professes his love for the new city and holds up a freshly minted jersey with his name on the back.  Interviews follow with all the local media outlets:  radio stations, TV stations, teenage sports bloggers, and typically, the surviving newspaper in town.

What most people don't see, is the behind the scenes photo shoots.  Put together in a rush, the sleepy player gets herded to multiple locations throughout the building to pose for the NBA, a magazine or two, the local paper, and a host of team sponsor PSA's.  It's a challenging situation, very similar to “media day” shoots that we all engage in during preseason training camps. Each photographer or news outlet gets the player for a couple of minutes and they produce the best sports portrait they can. 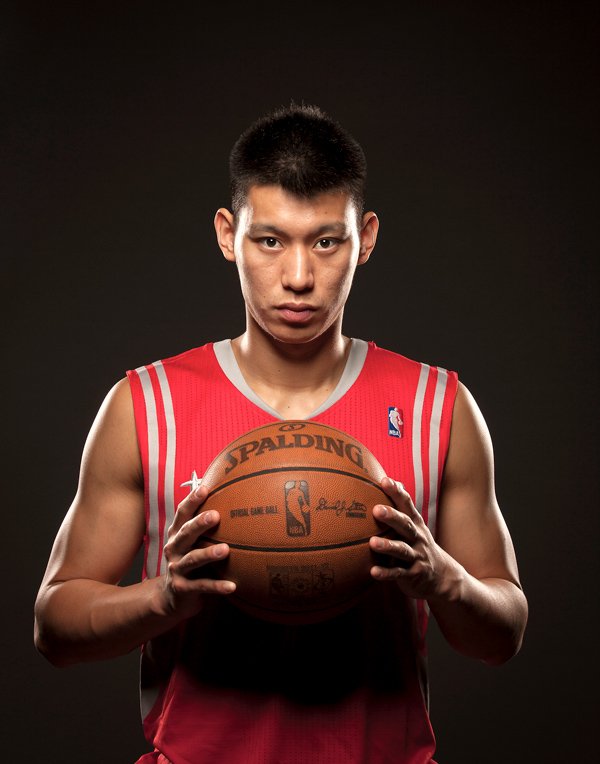 After I hung up with the SI photo editor, I immediately called my good friend, Rockets photographer Bill Baptist, who I knew would be doing the same gig for the NBA.  I found out that we were scheduled to be on one half of the practice court, since the other half was being used for the press conference setup.  Billy had to do two large setups, so he generously offered to have our shoot moved to the empty arena floor.  I quickly jumped at the chance and agreed that a larger room would be beneficial for all of us.  This way, we wouldn't be crossing cords or competing for space.  Plus, the last time Billy and I were that close together, I'm pretty sure he kicked my ass at tennis.

Stellar assistant Nathan Lindstrom and I showed up to the Toyota Center the next morning with a ton of gear, and made our way to the main arena floor.  An empty arena makes a great photo studio, but unfortunately, it really was empty:  as in, no floor!  Since the arena hosts a different event almost every night, the wood basketball floor was in storage – along with the basketball goals, etc. 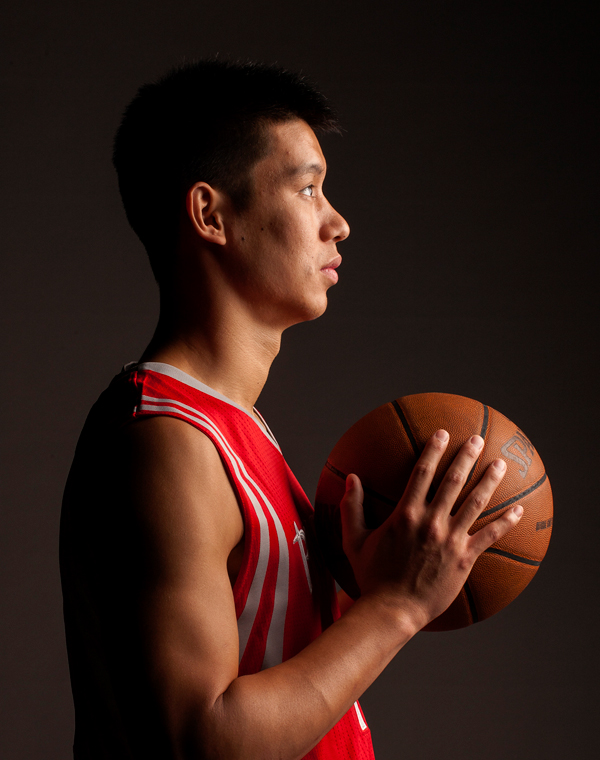 With the help of some friendly folks at the arena, we were able to get one of the basketball goals rolled out onto the empty concrete floor.  I figured that, even if the floor didn't show, we could at least utilize the goal as a background element for context.

We put together lighting setups in two locations:  A wide angle view with the goal in the background, backlit on both sides with Profoto 8A's and  large Chimera gridded softboxes.  We used a Plume Wafer Hexoval 180 as the main light near the camera.

On the other setup, we put together a seamless paper backdrop with two different lighting setups:  a three light setup with two Plume Wafer 100's with Lighttools grids, and a Profoto Beauty dish on a boom just above the camera.  The other setup was another Wafer Hexoval 180 to the right of the camera.  We used three Profoto Acute 600's for power on the seamless setup.

Lin showed up in a brand new red Rockets uni and made his way to our set.  After shaking his hand and welcoming him to Texas, we quickly put him through both seamless lighting setups, and then standing and dribbling poses on the backlit concrete floor setup.

Part of Lin's appeal is his status as a young, springy, high-flying point guard.  He looked great flying through the air, going to he hoop, and passing in mid air to his Knicks teammates during the a few months of “Linsanity” last season.  At the end of the shoot, I asked Lin how his knee was feeling.

He said it felt great.

Great enough to jump on a concrete floor?

I placed the camera, a Canon EOS1DS Mk III on the floor, and proceeded to shoot Lin leaping straight in the air with the basketball goal in the background.  He looked great – our only minor tweak being that of changing his hand positions during the jump.  At the end of the shoot, I handed him a towel, shook his hand and said thanks.  I looked down at my watch and a mere 12 minutes had passed.

He left the arena soon after and was mobbed……not by New York paparazzi, but by mouth-watering Houston real estate agents, eager to spend at least some of his 25 million bucks. 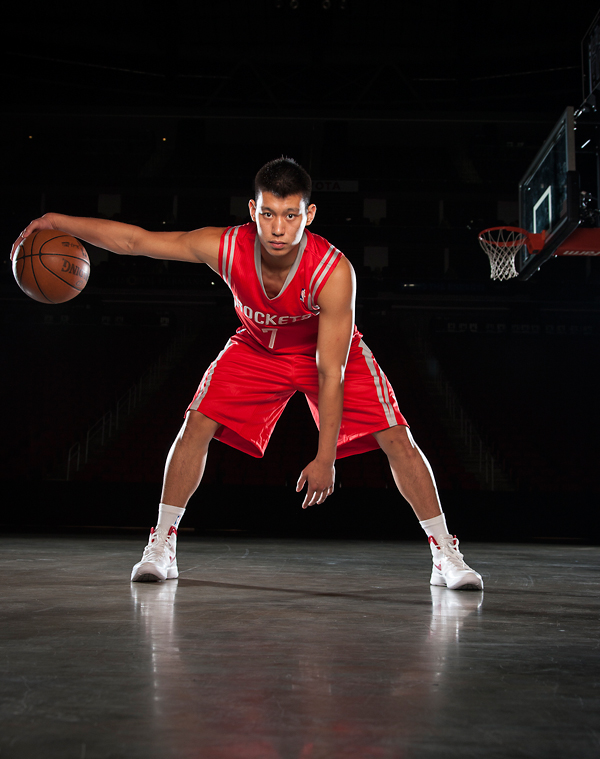 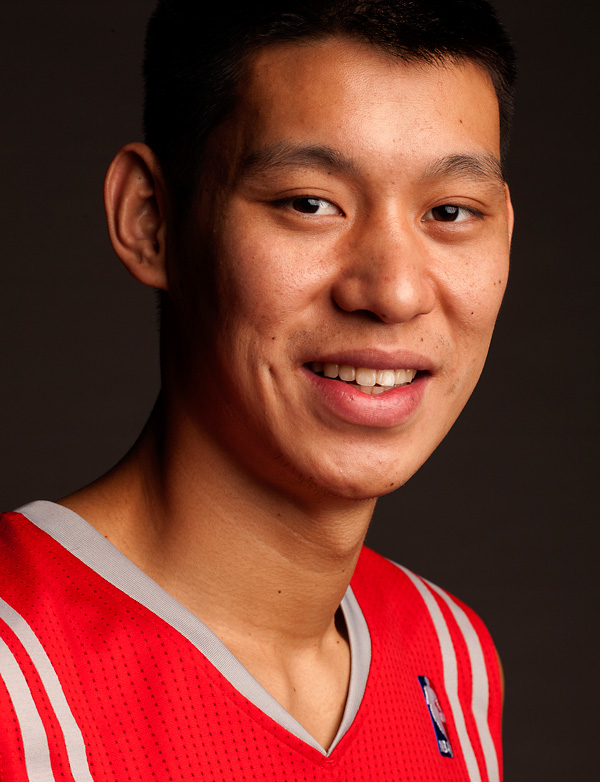 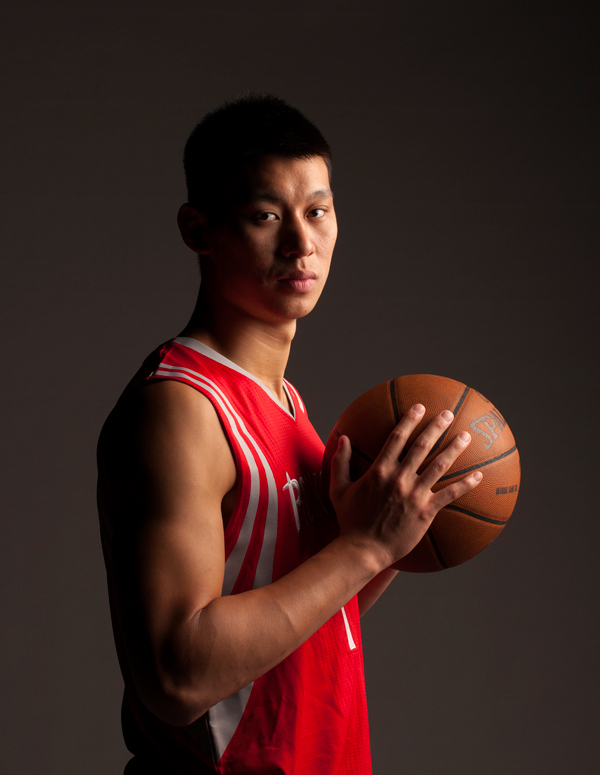