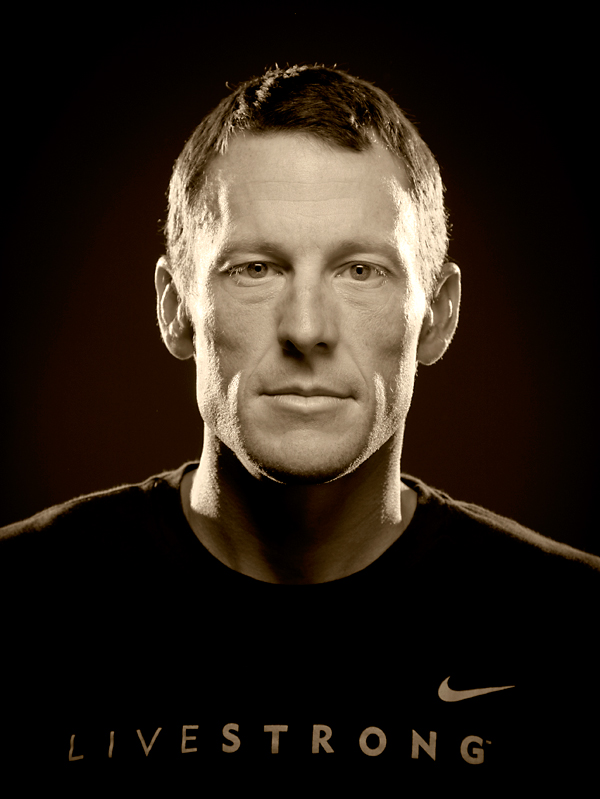 The 3 light, rim light setup, with a small stripbank directly over the camera.

I recently had the opportunity to photograph seven time Tour de France champ and cancer survivor Lance Armstrong in Austin, Texas for an editorial client.

Lance was preparing for his Tour de France comeback, so he was only in Austin for one or two days in the time period that would make our deadline, so there was a very narrow window to schedule the shoot.

Celebrities have lots of demands on their time, and are often dealing with tons of requests for interviews, photo shoots, etc.  Lance preparing for the Tour was no exception.  On the day we were shooting him, he had a charity event scheduled, two or three television interviews, a live radio broadcast, and our shoot….all crammed between 7:30 and 9am, so that he could train the rest of the day. 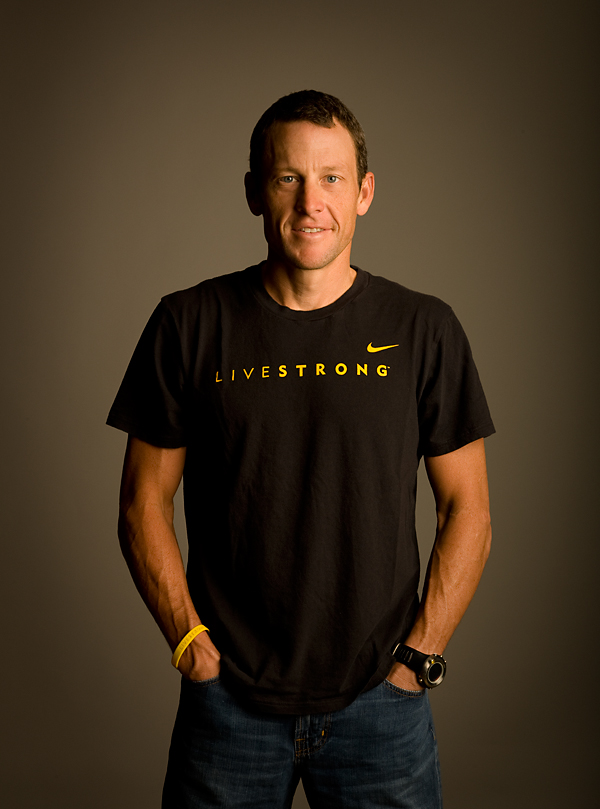 Lance owns a really cool bike shop in downtown Austin called Mellow Johnny’s, and the shoot (as well as the other events) was scheduled for the bike shop location.  We scouted the shop the day before, and determined that the best location would be in the basement area of the shop, where we could essentially set up a studio shoot, away from the charity event crowd and his other interviews.  For the shots of Lance, we knew ahead of time, that we were only going to get a portrait of him in a Livestrong t-shirt.  He was not going to pose in a jersey and bike helmet, he wasn’t going to pose on a bike….it wasn’t going to happen, so, in a way, it simplified things.  The question then became, how many looks can we get out of a black t-shirt portrait in 4 minutes?

With limited time and no props, and no environment, I decided to try to get as many different looks as possible in the short time frame available.  If you try to move a celebrity around to multiple locations, or move lighting equipment during the shoot, you are wasting their time, and you risk the shoot being over even quicker.  The best way to photograph them and get multiple looks, is through careful planning, and essentially encircling them with all the lighting equipment you’re going to use.

I decided on three shots:  The first would be a double rimlit tight portrait, with a small stripbank over camera; the second shot would be a broad softbox source –a large Plume Hexoval 180 slightly from the side; the third shot, would be a dramatic profile, lit with a Plume Wafer 100 with a Lighttools 30 degree fabric grid, with a projection of a bike wheel centered behind his head. 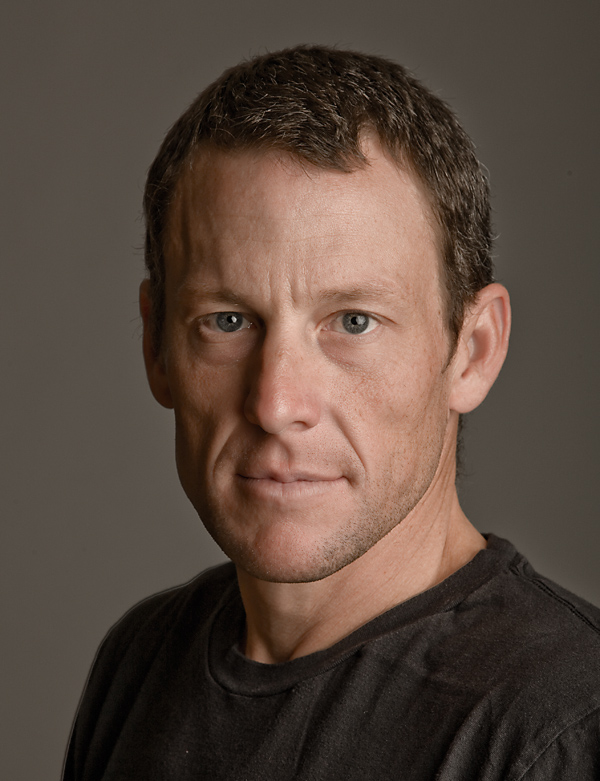 We started with a grey seamless backdrop, because we knew in the limited space that we had, we could use it as a grey/tan backdrop, we could make it go black, or if necessary, the art director could make a clip path and turn the background white….it gave us a range of options.

We arrived early, near 5:30am and began our setup.  Each lighting setup was plugged in to a different set of power packs, so that we could switch between setups simply by turning power packs on and off.  This kept things organized and simple, and allowed us to get multiple looks without fumbling around, switching  heads, packs, stands, etc.

Andrew Loehman, the assistant on the shoot, actually hung a real bike wheel from a piece of fishing line, and held it at the proper distance between the background and the light to create the shadow of the wheel on the wall.  A custom Dynalite projection spot provided the light.  With more time, we could have created a custom bike wheel “cookie” for the spot, but with limited prep time, an actual wheel was used to provide the signature bike wheel shape.

Lance was in and out of our setup in about 4 minutes.  Other than turning his body 90 degrees for the profile shot, he never moved, and even with that limited amount of time, without changing his wardrobe, and without a bike, we were able to give the art director several looks to choose from for the story.

(All photos © 2009 Robert Seale.  All Rights Reserved. – please do not post, right- click, steal,  or otherwise use any of our photos without permission.  For licensing info, contact Robert Seale Photography through the “Contact Info” link on the right) 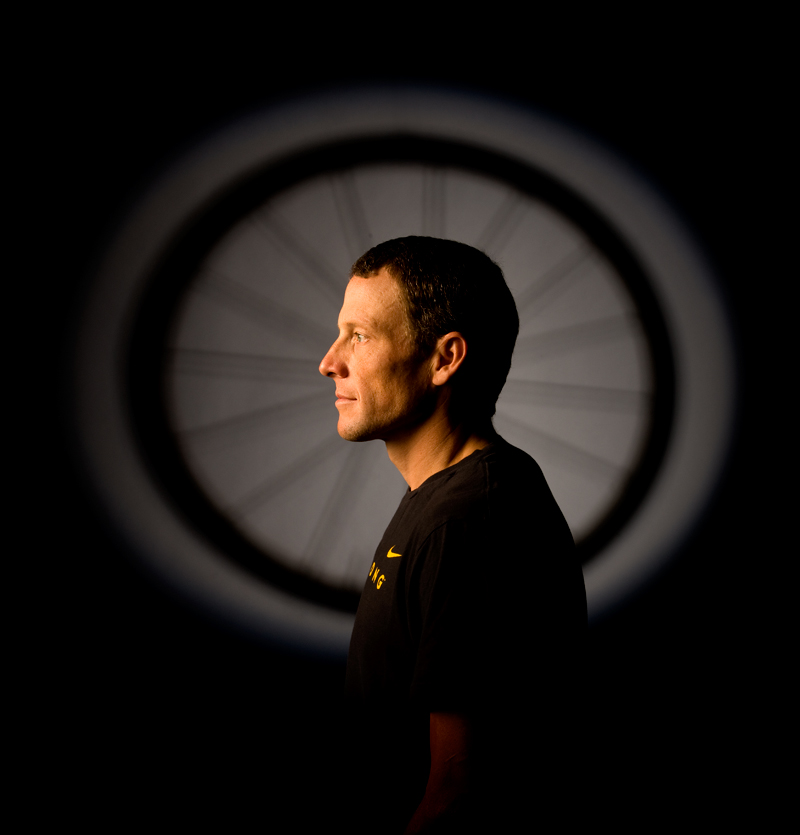 The last shot, a profile with a Wafer 100, Lighttools 30 degree grid, and projection spot.