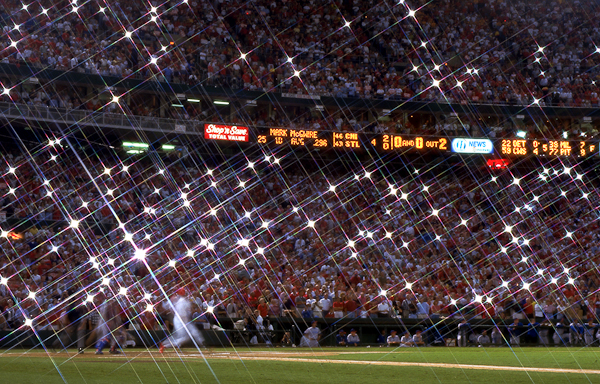 Ok, this is supposed to be a blog about photography and lighting, and primarily about my conceptual sports portraiture work, but I'm going to break with tradition today and talk for a moment about Mark McGwire.

A little background first:  I've covered professional baseball since 1992.  For 10+ years  I was a staff photographer for The Sporting News.  I did sports portraits for covers, feature stories, and some reportage work back then, but 60-70% of my job then was covering games and shooting action.  These days, I mostly get called upon for portraits, but there was a time when my 400/2.8 and I were inseparable. 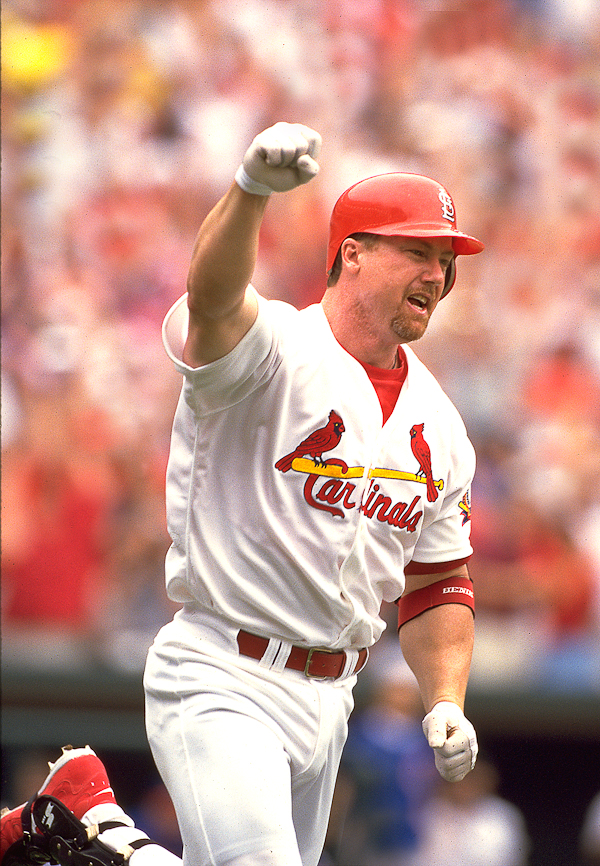 McGwire celebrating after home run No. 61.

I first photographed McGwire when he played for Oakland in 1996.  Later on, I covered him during his chase to break Roger Maris' record during the summer of 1998.  I witnessed first hand the amazing batting practice feats of strength, (I saw him send a ball into the upper deck suite level of the Astrodome), and when he got close to 61, I flew to St. Louis, (on a TWA redeye, with Joe Morgan across the aisle…) to cover him for several days. 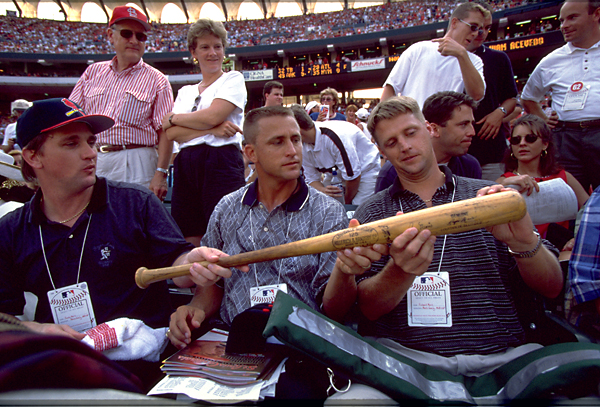 The sons of the late Roger Maris, checking out their father's 61st HR bat.

As part of the Sporting News team (along with my great sports photographer colleagues Albert Dickson, Bob Leverone, and Dilip Vishwanat), I was positioned in the outside first photo well.  There were four of us in that position: John Biever from SI, Eric Draper (then with the AP), J. B. Forbes of the St. Louis Post-Dispatch, and me (holy crap!).  There were photographers all over the stadium, but this was a pretty primo spot to catch McGwire's swing and subsequent jubilation.  The commissioner and Stan Musial were sitting in the box next to our well.  Maris' kids were right behind us.  It was an exciting, and very high-pressure assignment.

How many headline writers could resist “Huggy Bear?”  Not many.

We blew through film like nothing you've ever seen (yes, we were still shooting film then).  Each swing brought forth a wave of noise that sounded like a machine gun chorus of motor drives, followed by the inevitable tossing of the film after each missed swing during his non-home run at bats.  He hit home run no. 61 on Sep. 7 (a day game).  Home run 62 (which broke the record) came the next day (a night game).  The crowd went nuts.  He hugged his son.  He hugged Sosa.  The media went nuts and gushed over him for months (my own employer even more than most).  America welcomed baseball back after a bitter strike.  It was exciting and wonderful, and to this day is the most amazing thing I've ever witnessed in sports.

THE most amazing thing I've ever seen in sports.  Without question.

Here's the part where you are thinking….

“well, he didn't work there that long….Robert doesn't really have a broad scope covering sports…..he didn't really see any other major events, etc…..”  To that, I say…..here's my list of a few memorable events I've photographed:

I was in the end zone when Vince Young ran in for his final touchdown in the 2006 Rose Bowl.

I followed Annika Sorenstam for 18 holes at the Colonial in Ft. Worth in 2003.

I was on the field when crazed fans tore down the goalposts at Doak Campbell Stadium  when #2 FSU beat #1 Florida in 1996.

I was there when Barry Bonds hit home run No. 70 to tie McGwire's record.

I've seen some amazing sports moments….and the McGwire home run chase  is still the most amazing thing I've covered in sports.  It brought baseball back from the dead.  Not a corny cliche, but an absolute truth. 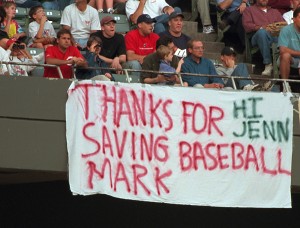 I wonder who Jenn is?

Am I upset that he cheated?  Absolutely.  Were we duped?  Uh, not really.

Everyone knew what was going on-but we all wanted to believe.

Are we really going to ban steroid/HGH users from the Hall of Fame?  If so, which guys?  Just the ones that didn't admit to prior use, or all of them?  What about the ones who had HOF level careers (Clemens, Bonds), before they ever took steroids or HGH?  Are we really willing to erase 15-20 years of baseball history, historic games, and memorable moments over this?  Where do we draw the line?  Are you just going to let in the guys who were nice and contrite about it, that everyone likes, like Andy Pettite? and exclude the prickly ones, like Bonds?  I don't think so, it's really an either/or proposition….and would there really be any players left if you eliminated everyone who ever took these substances?  Good luck.

Believe me, I think the whole era smells.  I don't like it any more than anyone else, but I'm just not willing to throw the baby out with the bath water here.  For better or worse, this is now part of the history of baseball.

Throw out the moral arguments about cheating for a moment, and tell me why we put so much stock in home run records when the game is chock full of variables?  Think about it.  A football field is always 100 yards.  The 400 meter dash is always 400 meters.  But baseball?  Every park is different.  The dimensions are different from city to city, and teams in recent years even built parks to suit their star hitters (Houston, San Francisco), with ridiculously short fences.  Hell, in the old days, groundskeepers moved the outfield fences depending on which team/slugger was coming to town.  Was that cheating? 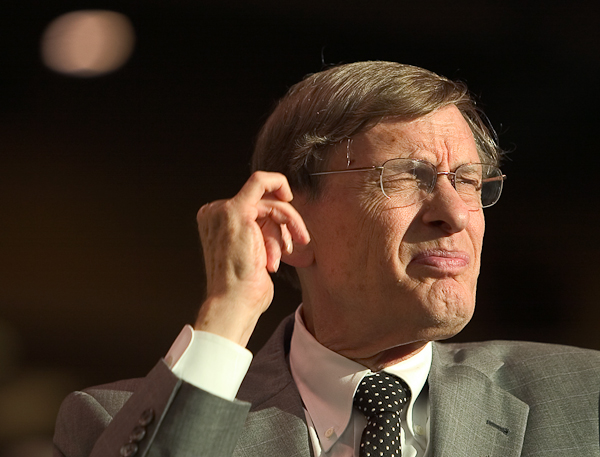 See no evil, hear no evil, speak no evil.

What about the NFL?  What about the NBA?  What about the Olympics?  I'm convinced that the sports-writing world, and even the general public, gets much more upset about baseball because of the romanticism associated with the game.  Boy Scouts, apple pie, etc….we all played little league at some point, and we all feel maligned that these professionals ruined “our” game. 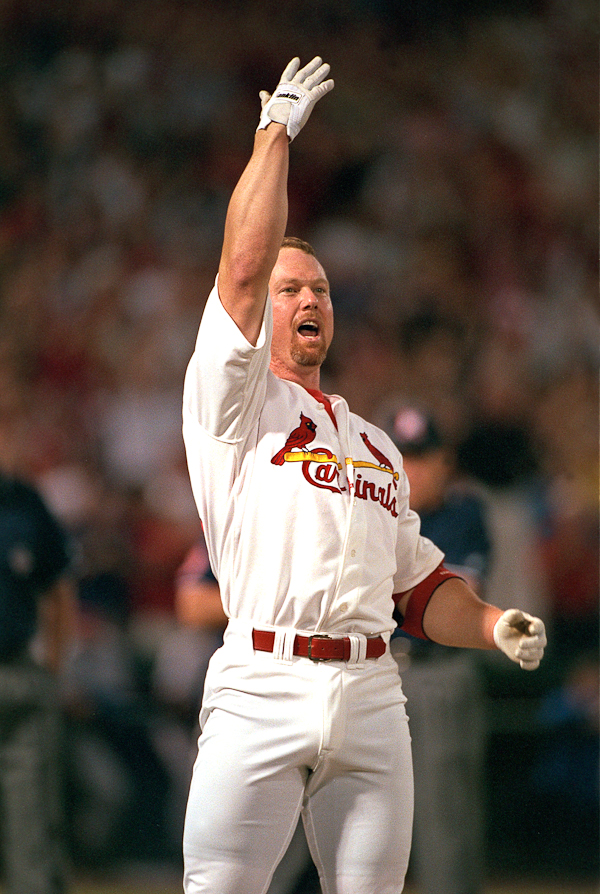 Here's my solution to the whole Hall of Fame thing.  Let them all in.  A-Rod, Bonds, Clemens, McGwire, Palmiero, etc.  Just let them all in.  We know it was the steroid era, hell, we've known it for years.  Baseball,  the commissioners office, the media, and the players association were complicit in this.  Everyone knew what was going on.  Some have estimated that more than 80% of the players during that era were using some sort of performance enhancing drug.  That doesn't make it right, and I'm not happy about it, but over time, we'll find out that the majority of players were doing it.  Should we ban players who were using substances in other eras? There were a lot of cokeheads in the 70's and 80's.  Amphetamines have been prevalent for decades.

Perhaps we need to lose some of our moral indignation.  The damage is done, and these guys, even if they do get into the hall of fame will have to live with big scarlet asterisks on their collective foreheads for the rest of their days.  It's now part of the history and lore of baseball -the good and the bad.  And hopefully we'll chronicle it accordingly, put it behind us,  and move on.

(Please note: These photographs are © 1998 Robert Seale/The Sporting News.  All Rights Reserved.  Please do not right-click, use, or appropriate any of these without permission or attribution.  Thanks!)