There's a strip mall behind that cloud curtain……

As photographers, we are often thrust into bad situations.  Try as we might, it's often not possible to schedule photo shoots during magic hour, or work in wonderful and exotic locations with gorgeous people who have all the time in the world.

In reality, I often deal with very busy people, and things need to get done on their schedule, not mine.  Back in August, I received an assignment to shoot ABC/ESPN television commentators Mike Tirico and Deion Sanders.  The catch?  I was piggybacking on an existing video shoot, and would have a whopping 5 minutes with them.

No problem, I'm thinking….I've done ok with less time than that before.  Then, I heard more details:  high noon shoot, they're wearing dark suits, with a black truck, in a strip mall parking lot, you can't take them anywhere else, you'll have 5 minutes, and, oh yeah….did I mention it was August in Houston?

No problem, I'll arrive early, take every piece of lighting gear I have, and figure something out…..maybe it's a huge parking lot near a school with a football field – I can surely get them to go there.

My assistant, Todd Spoth and I arrived early, and canvassed the neighborhood.  The video shoot was at a small sound stage 30 miles from downtown.  It was literally suburban hell – strip malls, gas stations, light poles, and power lines everywhere…we literally couldn't find a clean location to take our subjects anywhere near the studio.

I found a parking lot next door with a slight slope to it, parked the spanking new GMC Sierra at the edge of the lot, and placed the camera on the ground.  If you can't get your subject in a clean, nice location – go low.

A 12 x 12 shaded the area in front of the truck where Tirico and Sanders were to stand, and some large mirror boards (borrowed from the super nice video guys) gave us a great kick on half of the chrome grill of the pickup.  A Wafer Plume 140 lit the other half of the grill.

Good thing we were there early, because our talent left the studio early and were ready to shoot an hour before we had originally planned.  We shot Tirico and Sanders individually, then together, shook hands, said thanks and they hopped back in their limos before they melted.  We were literally done in 5 1/2 minutes. 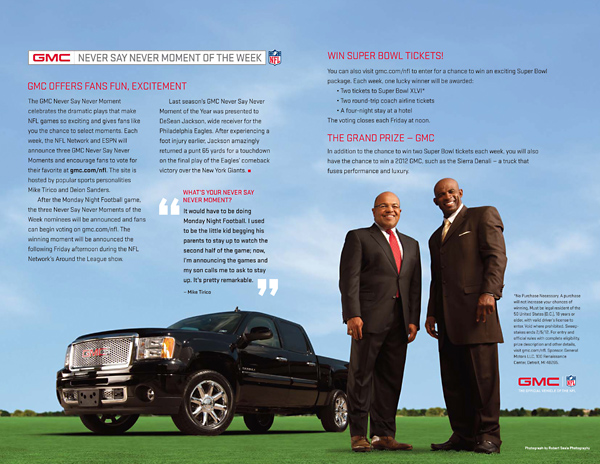 The magazine loved the photos but decided to change the background, dropping out the strip mall on the horizon and replacing it with sky.   I had anticipated the change and had already asked retoucher extraordinaire Pratik Naik to work one of the frames up as an example.  GMC liked that photo so much that they relicensed it for use in their online newsletter e-blast, and in a NFL insert in their magazine, as well as using it in the original “advertorial” feature in their trade magazine.  They used the sky photo in the eblast, and they decided to have their retoucher add grass to the insert photo.

The lesson here?  Keep a good attitude and do your best, even in a rough situation where you feel like there is no good picture to be made.  Light your subjects carefully, even if you are stuck with a less than desirable background.  You never know when a little  shoot could turn into something bigger. 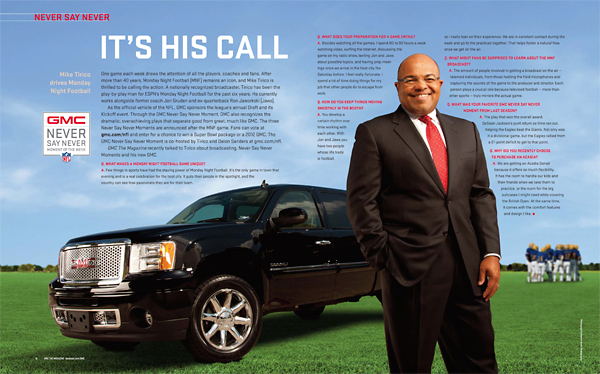