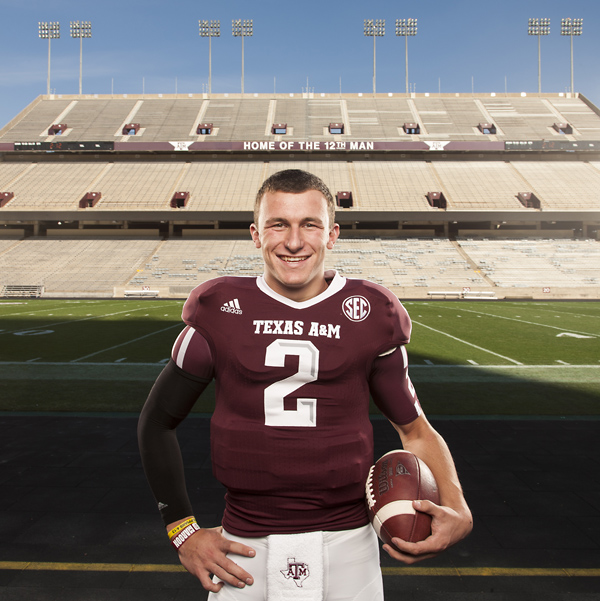 The shot that ran in the magazine: “Johnny Football” centered on the 50 yard line at Kyle Field.

Manziel, a redshirt freshman sensation, was sequestered from the press by his coaches until the week before the big announcement.  When he finally spoke, the country heard from a charming, positive young kid who was enthusiastic and enjoying every minute of his journey.  I've shot a ton of athletes, and normally we do a few “tough guy” or heroic poses, and we tried a few with Johnny, but he literally couldn't stop laughing and smiling.  The best shots were the ones where he was grinning from ear to ear.  That's truly him – just a bubbly kid who's happy to be here – overflowing with excitement that he gets to wake up each day and play QB for the Aggies…..and that was BEFORE he won!

For the shoot, due to newfound demands on his time and a TON of media interest, we had a shoot time of 2pm, which is not the most flattering light to photograph in.  Actually, we were overjoyed to have any time with him at all, and Texas A&M SID Alan Cannon, who's a really great guy I've known for many years, made it all happen.  We had a 30 minute slot (really only 25 minutes, because SI was also doing a quick video interview for the website in the last 5 minutes).  We had to really plan all our shots in advance and have everything tested and set up ahead of time in order to maximize our time with him.

We really wanted a dramatic stadium tunnel look, with Johnny lit from above and the background blown out.  I had done a similar shot of Jason White at Oklahoma years earlier, and the editor had mentioned using a tunnel if possible.  We scouted the stadium for a couple of hours before the shoot, and didn't find any suitable tunnels.  At A&M, many of the tunnels were narrow with chain link gates/fences in them, and it wasn't clean enough in my opinion to pull off the shot we had in mind.

I also knew that the photo was probably running as a square in the magazine so I shot most of the shots loose enough so that they could be cropped in that shape.  There was also some discussion of converting all four players to sepia (which they decided not to do) so I tried to shoot with contrast in mind.

The sun was high and blistering, there was no shade to work with, so for the first shot, we planned to place the sun behind him and use it to our advantage.  By placing the sun behind his head and underexposing the scene, we silhouetted the stadium (and Johnny).  We added a Hexoval 180 from the left and made a dramatic portrait with a darkened Kyle Field behind him.

For the next setup, I wanted to emphasize the large “Home of the 12th Man” sign on the student side of the stadium.  We were able to find a small tunnel entrance on the 50 yard line, where I shot from, and then we backlit Johnny from each side with Wafer 100's.  Assistant Nathan Lindstrom then used a long boom to place a Hexoval 140 directly in front of Johnny's face, centered right over the camera, while Butch Ireland ( a longtime and very talented photographer colleague from College Station) manned an 8 x 8 Westcott ScrimJim to keep the harsh sun out of the scene.  We also ditched the backlights and did a few dramatic shots with the Hexoval boomed to the right side.

We then walked Johnny over to a corner tunnel, which had a really interesting pattern in the poured concrete wall.  It almost looked like a hand painted muslin fabric.  We set up two other lighting setups there.  The first one was a raw reflector head, which cast a shadow of Johnny on the wall.  The idea was to replicate the look that stadium lights would have in the tunnel if you were about to take the field at night.  The other setup was just a Wafer Hexoval 180, which we used to do some classic 3/4 shots of Johnny from the waist up and tight on his face.  I wanted some simple shots with a big light source that would capture his ebullient personality.

When we stopped, I looked down at my watch – we had done 6 different setups in three locations around the field in 21 minutes!  Johnny sat down for his interview – and then…oh Lord, the video shooter, Dan Blust, a talented videographer from Houston, interviewed me about the shoot.  SI did this at each location and put together a nice behind the scenes video which you can see here. 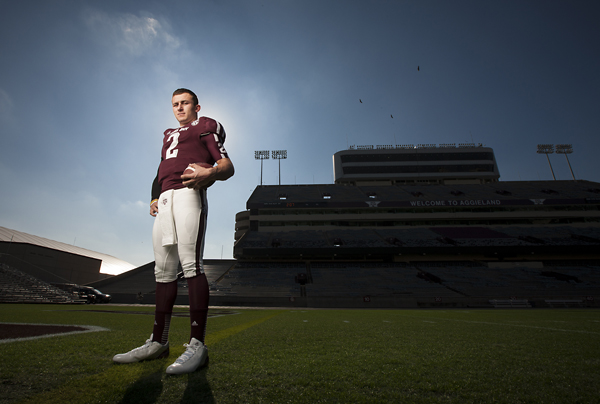 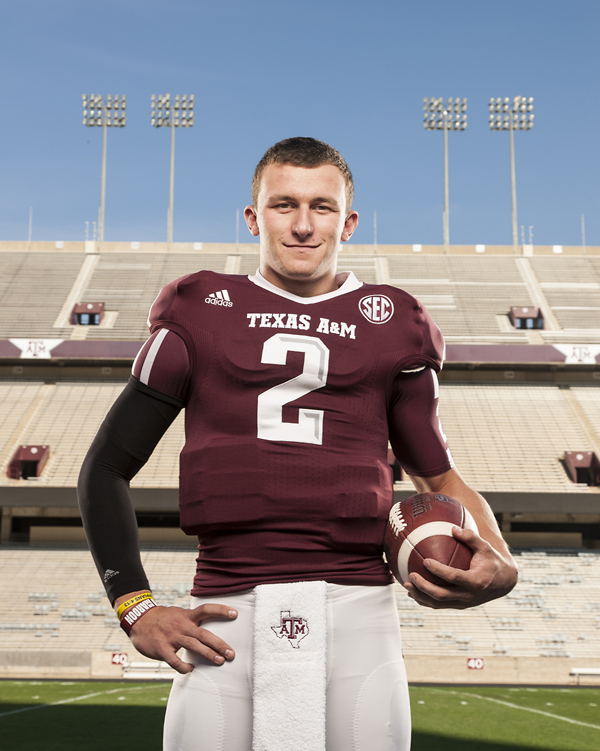 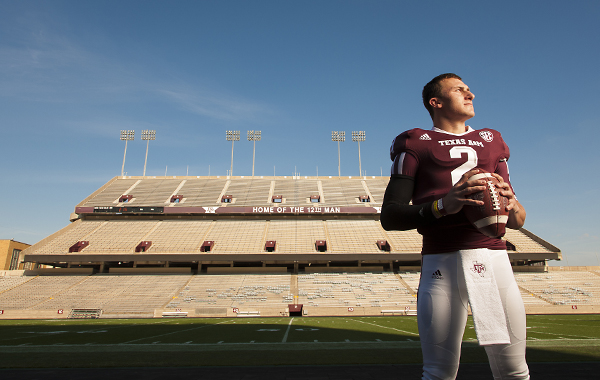 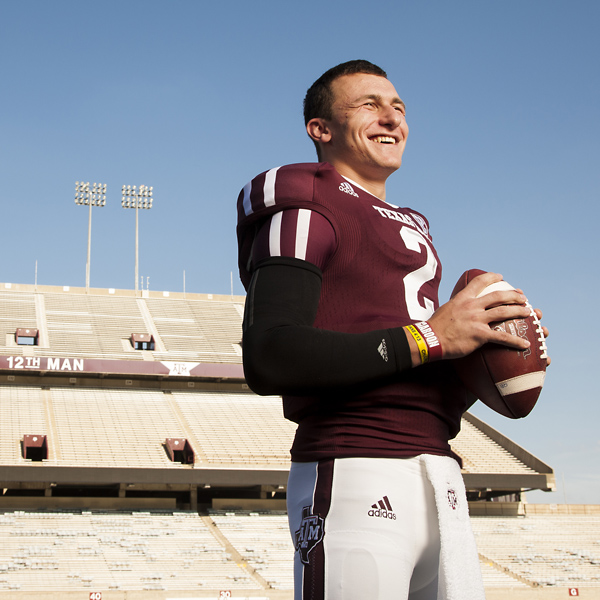 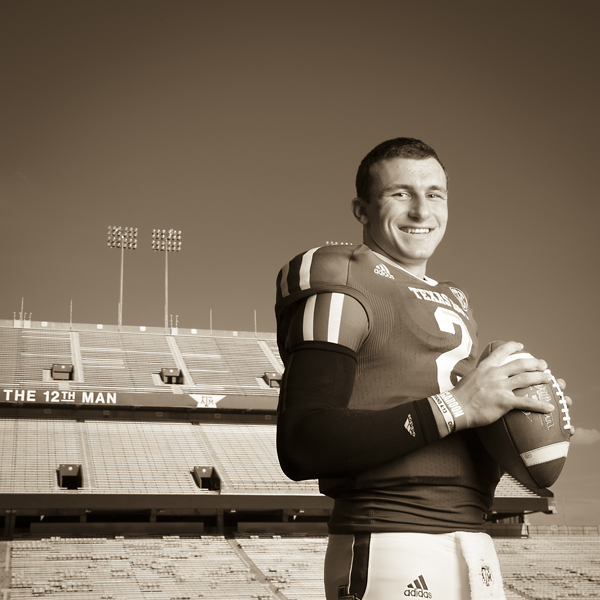 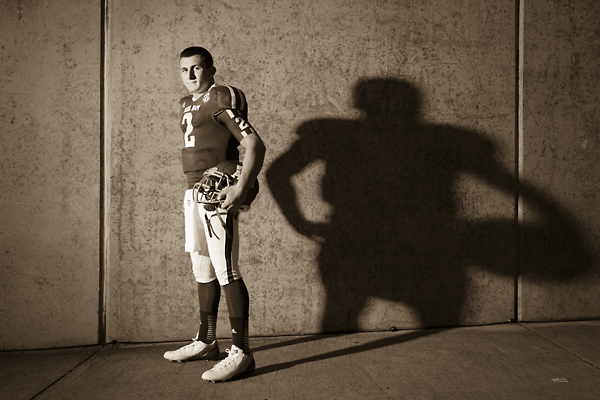 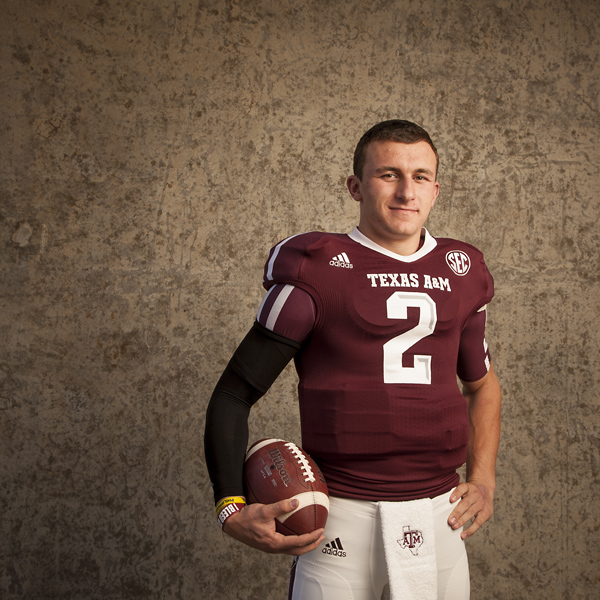 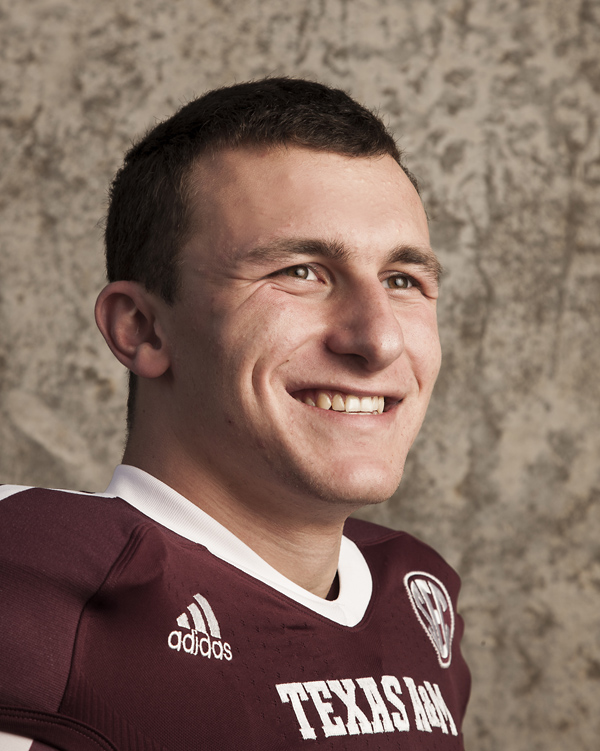