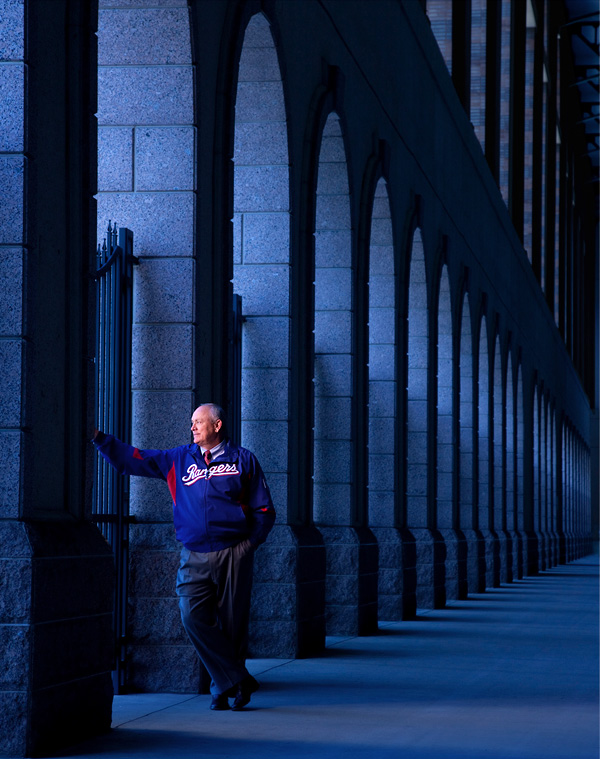 For almost 11 years, I shot lots of baseball.  As one of three photographers at The Sporting News (the nation's oldest national sports magazine, founded in 1886), I was lucky to be among the few photojournalists to attend and cover the World Series each and every year.

As a freelancer, I don't get the opportunity to shoot baseball games much anymore, although I still shoot a lot of sports portraits.  I thought I would use the Texas Rangers first ever appearance in the Fall Classic to show off some portraits I did earlier this year of one of my favorite sports icons.

Nolan Ryan is now the President of the Texas Rangers, the last team for whom he pitched before his retirement in 1993 after a stunning 27 seasons in the major leagues.  In addition to his 6th and 7th no-hitters,  Ryan had another famous moment as a Texas Ranger.  In 1993, just before his retirement, Robin Ventura charged the mound on Ryan, who was easily old enough to be his father.  Ryan made quick work of Ventura, putting him into a steer-hold with his left arm and pummeling him with his right.  Two of my sports photography colleagues, Linda Kaye, and Brad Loper, got great photos of the altercation.  I'm not sure why, but I loved that moment:  it was awesome to see an old scrappy Texas cowboy holding his own against a young punk.  For better or worse, this forever tainted my view of Ventura, and solidified what I already knew:  Nolan Ryan is a badass.

As a kid growing up near Houston, I occasionally had the opportunity to attend games at the Astrodome.   Ryan's pitching prowess was the main attraction on those teams in the early 80's, although, I must admit I was probably equally impressed with the Astros massive Lite-brite scoreboard (hey, I was a kid…).  One of my early baseball memories was of sneaking out of class and hiding out in the band hall to watch Ryan pitch in the 1986 NLCS with my high school band director, who was a big Astros fan.

Earlier this season, I shot a group portrait of Ryan, Rangers pitching coach Mike Maddux, and the Rangers pitching staff for Sports Illustrated.  The highlight for me, was taking a quick opportunity after the shoot to take a few frames of Ryan alone.  I photographed him with a long lens, looking down the row of archways at Rangers Ballpark in Arlington.  We hid a Profoto 7b behind one of the archways  with a Plume Wafer 75 equipped with a Lighttools 30-degree grid (to contain the light on Ryan's face and upper body without too much spillage on the scene).  Although I don't use gels much anymore, we also used the old tungsten film trick here, setting the EOS1Ds Mark III to tungsten to add a Rangers blue cast to the scene, and then adding  a 1 1/4 CTO gel to the strobe to filter Ryan's face back to warmish daylight.  At the end of the session, I asked Nolan to show me his famous fastball grip. 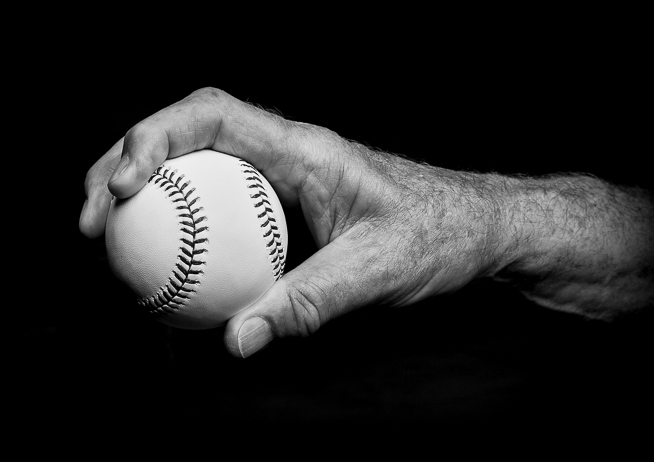 Best of luck to Ryan and his Rangers in the upcoming Series.