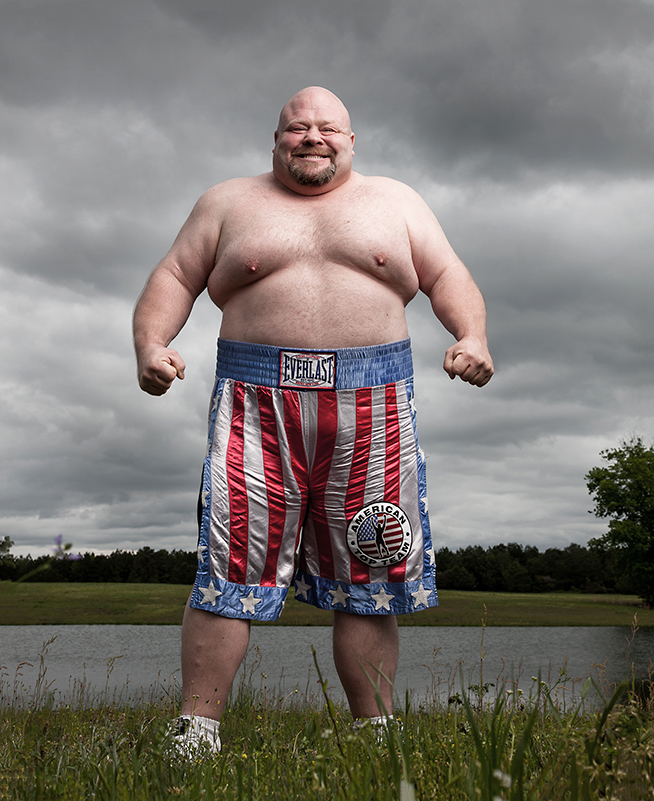 Sometimes we head into an assignment with preconceived notions and expectations, and it’s always interesting when those stereotypes we carry in our brain are challenged.

I recently visited the lovely little town of Jasper, Alabama to photograph Eric “Butterbean” Esch on a feature assignment for Sports illustrated. The magazine runs an annual “Where are they now?” issue, and revisiting these once famous athletes usually makes for great pictures and fun assignments.

The story brief was to visit with Butterbean in his home town of Jasper, Alabama. He had risen to fame in the early 90’s by winning Toughman competitions, later becoming a heavyweight boxer, then a pro wrestler, and later an MMA fighter. He was often called “King of the Four Rounders”, and he ended most of his fights by knocking his opponent out cold. He was not, however, a svelte guy known for his bobbing and weaving. Butterbean was a brute – a massive, huge fire plug of a guy – under 6’ tall and nearly 500 lbs at one time . He was down to a svelte 450 or so when we met last year.

He had briefly been on a reality show where he worked as a small town deputy, and I had seen clips of him in the first Jackass movie, where he dispatched Johnny Knoxville in the middle of a clothing store. If you haven’t seen it, it’s a clip worth watching.

I was fully expecting a tough, redneck, barbeque eating, southern, he-man figure. I had visions of him in full on Boss-Hog deputy mode standing in front of a police car. Of course my expectations were wrong. He had only been involved with law enforcement for a short time, and I think mostly for the benefit of the reality show.

Well, ok, if nothing else, we’ll eat well in this little Alabama town – perhaps we’ll have a great plate of ribs somewhere. That was not to be, either.

“Do you guys like sushi?” he asked me and the writer, SI's Lars Anderson.

Lars and I looked at each other with the same puzzled look, “…uh, yeah….sure.” We DID both like sushi (very much) – we just didn’t expect to find good sushi in a landlocked town in the middle of Alabama. It actually wasn’t bad. 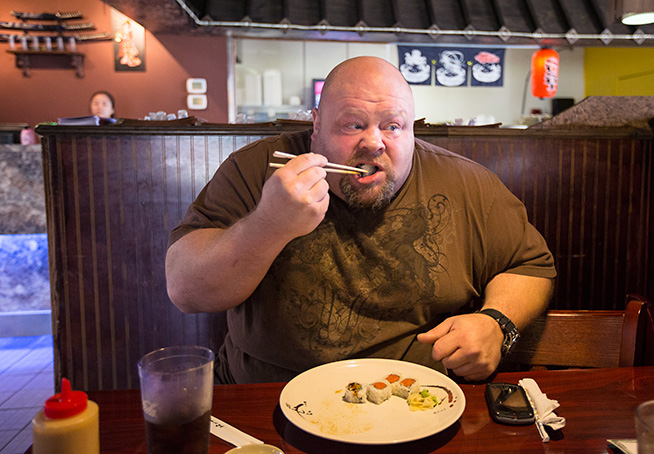 Butterbean was a soft spoken, genuinely nice guy, living the quiet life in his hometown where, people for the most part leave him alone. He was now a grandfather, and we saw him hug and squeeze his grandkids.

He had owned a restaurant, next door to his house for a while. A lot of his old memorabilia – pictures of him in his American flag shorts in Vegas with Cindy Crawford, Sylvester Stallone, and basically every 90’s celebrity you can imagine, signed gloves, championship belts, etc were scattered throughout the now defacto storage building. 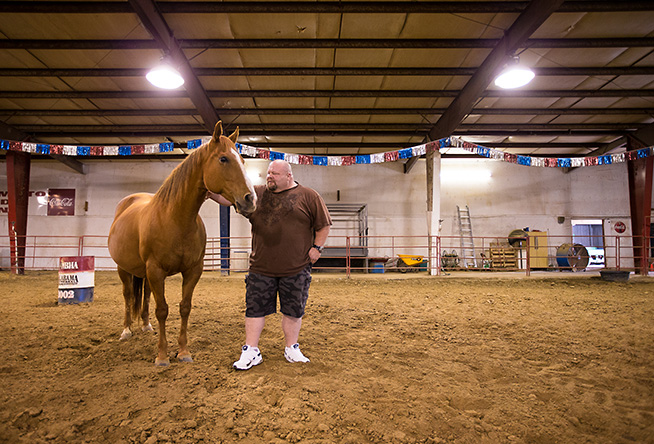 Buterbean petting a horse in the Alabama rodeo arena where he first fought professionally.

After shuttering the restaurant, he had taken up many hobbies, among them woodworking, making turkey calls, and even winemaking. He gave me a bottle of port as we toured his property – a sweet gesture.

Another way to use Xanax pills is to treat seizures. In general, this drug is one of the most popular psychoactive substances. That’s why Xanax is so popular with addicts. It has a very fast effect, calms down, and when the dosage is exceeded, it gives a completely different effect, which is so popular with people with drug addiction. But if you do not calculate the dose, the Xanax effect can lead to very serious consequences, including death.

Despite all the good reportage from around his town, I knew that he would be immediately recognizable in his signature red white and blue boxing shorts. It rained both days we were there, but I really wanted to photograph him in his old fighting outfit. It would make a great opener before showing the other pictures of his current reality. For the full first day, he put me off, claiming he didn’t even know where his shorts were… “those are packed up in a box somewhere….” He said.

I pressed on, gently. When we arrived for his portrait on the second day, he had found the shorts and reluctantly agreed to don them for us. We went to a neighbor’s property (his was heavily wooded and surrounded by fences), for the shoot. He immediately turned into his old persona and gave us the crazy Butterbean poses and faces he was once known for.

As we were leaving and heading back to Birmingham, he shook my hand while departing….”be sure to let me know how you like the wine, ok?”

Lars Anderson, an excellent SI staff writer wrote a great piece, where he provides more background on the origins of Butterbean’s awesome nickname. 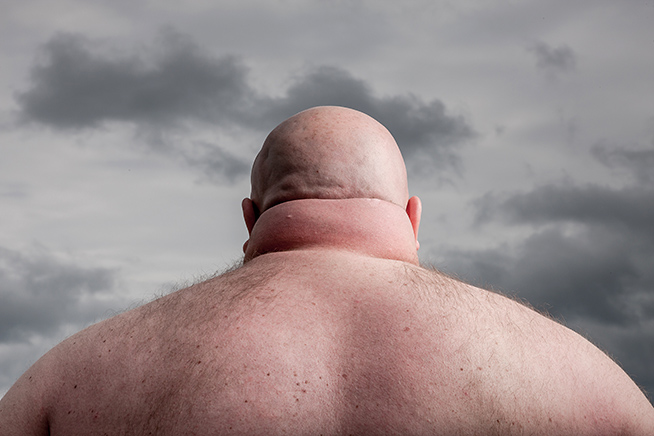 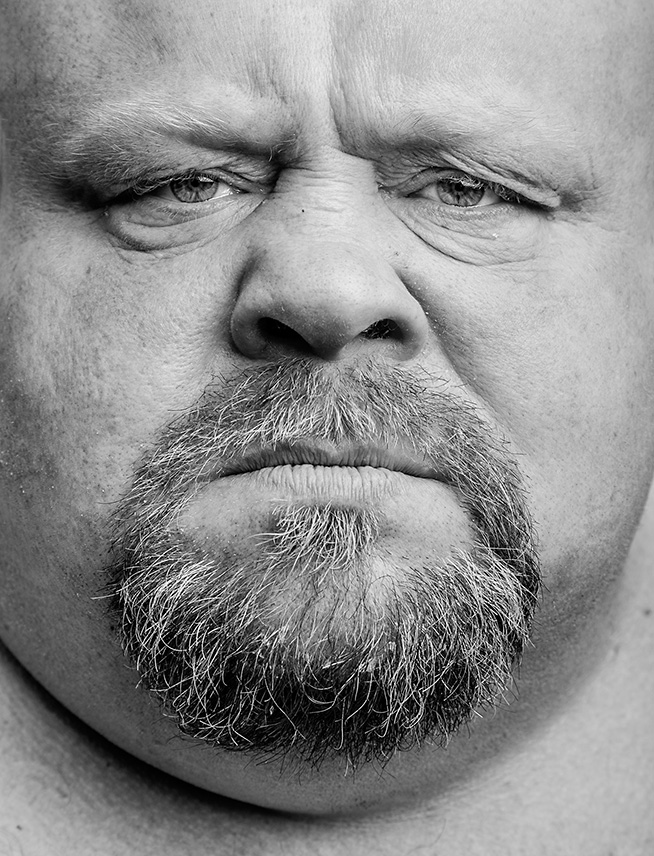 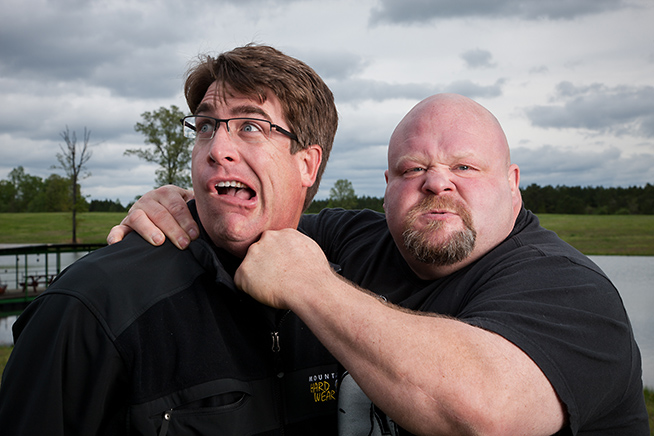 Left Jab: I don't often take photos with celebrities I photograph, but i just had to do it this time…..