Photographing Tim Duncan – the greatest power forward of all time 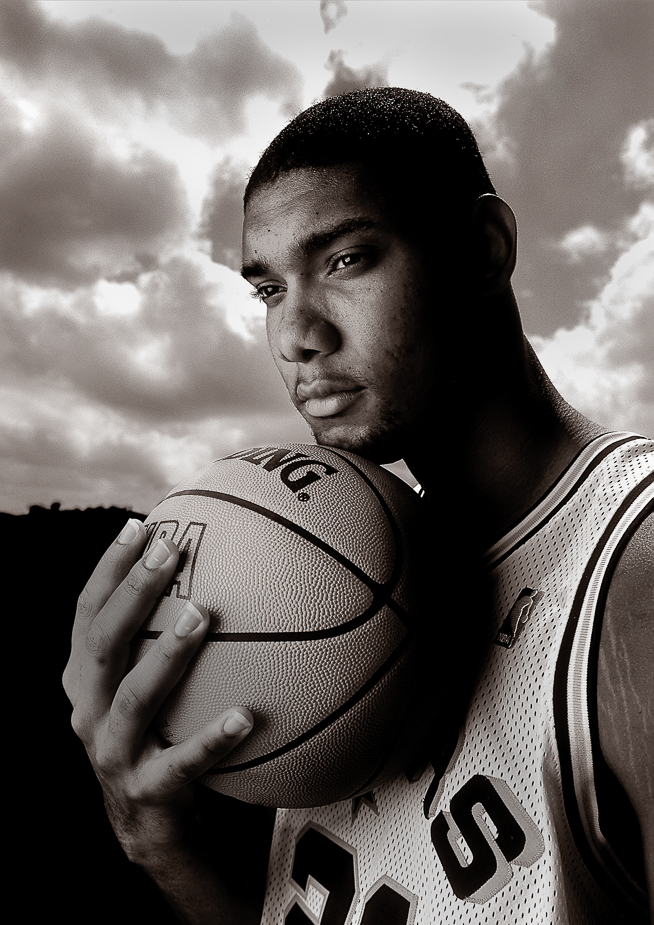 I covered Tim Duncan during countless games, including three San Antonio Spurs NBA Finals titles in 1999, 2003, and 2005. I probably took thousands of photos of him, but on the occasion of his quiet retirement, I picked a few out just for this blog.

I first met and photographed Tim Duncan on literally his first full day in San Antonio. He was drafted in Charlotte at the 1997 NBA Draft and flown to San Antonio, and then early in the morning of June 27, 1997 at Trinity University I photographed him for The Sporting News, my employer at the time. I had a crazy schedule back then, and had just flown back from Vancouver, and then been dispatched straight to San Antonio the night before for the Duncan portrait. 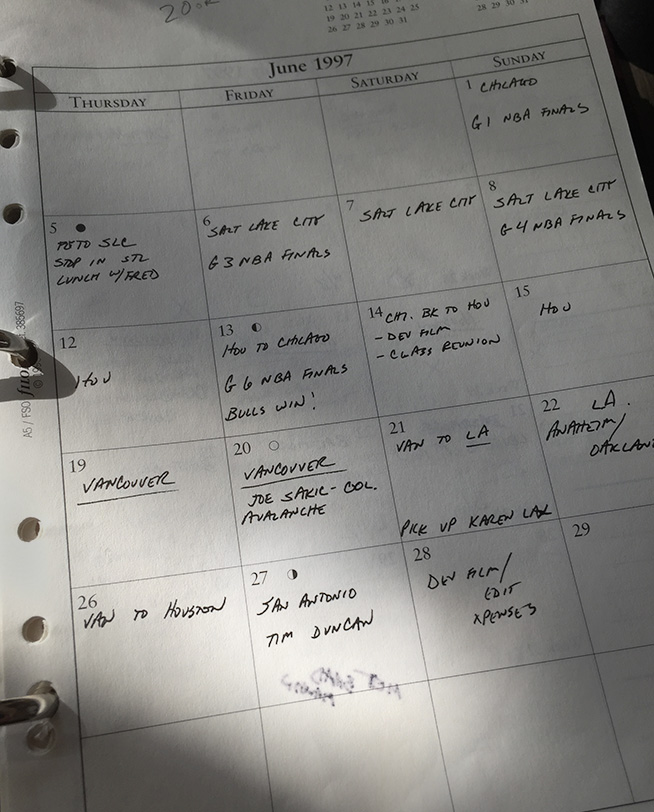 My Filofax page from June 1997. Things were busy at TSN back then!

There were three shooters there that day: the Spurs photographer (and all around classy guy) Clarke Evans, Patrick Murphy Racey, who (I think) was shooting for NBA photos at the time, and me. I think Clarke was the only one with an assistant, Patrick and I were there alone.

This “photo day scenario” was not an uncommon practice: you’re scheduled for a shoot with some big time pro athlete, and the team schedules several different media outlets for the same time frame. The athlete might be on set for half an hour, but each photographer gets 5-6 minutes on their own individual background , and you’re literally shooting a couple of feet away from the other photographers in the same room. I think Clarke and Patrick both had seamless setups, so I went outside on the balcony of the conference room we were in and set up my lights out there.

What I remember most is how quiet and childlike Tim was back then. He had a friend with him from college, and I remember them sitting together between the shots and chatting about nerdy guy stuff: knives, swords, or something.  I could totally picture them playing Dungeons and Dragons. I wondered how many 20- sided-dice might fit in his gigantic hand. It was really innocent, and there was no ego or bravado. I remember none of us being able to force much of a smile out of him. He was completely uninterested in being a star – he just wanted to play….and I don’t think he ever changed in the next 19 years. 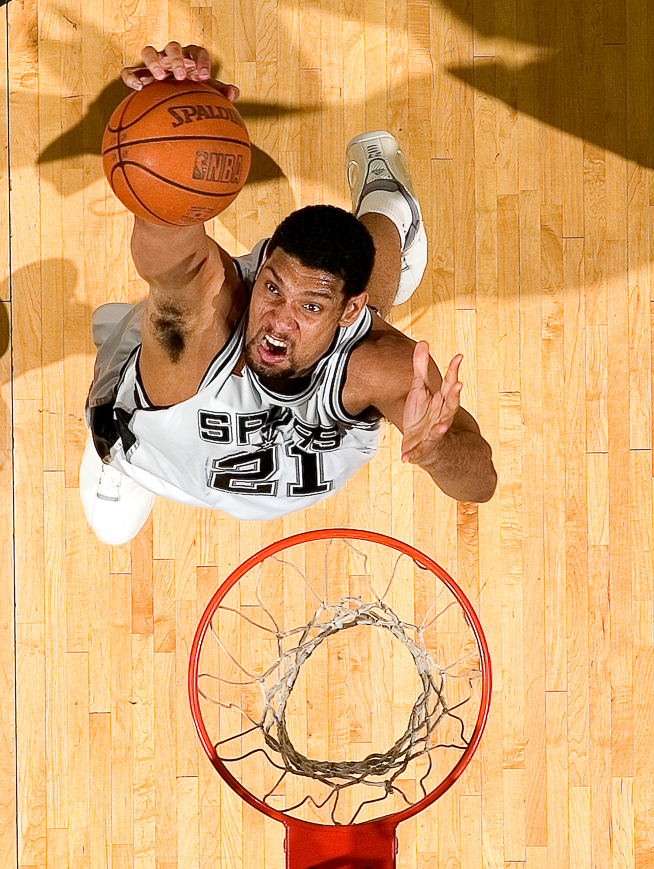 The best part of covering the Spurs during the NBA Finals was the camaraderie among fellow basketball photographers, all of whom travel together for weeks during the playoffs like a big traveling circus. Everyone works long hours, but after the gear gets put away, there were wonderful late night meals at Mi Tierra or drinks in the hotel hospitality suite with guys like Andy Hayt, John McDonough, Andy Bernstein, Bob Leverone, Andrew Loehman, Ronald Martinez, and a host of others. 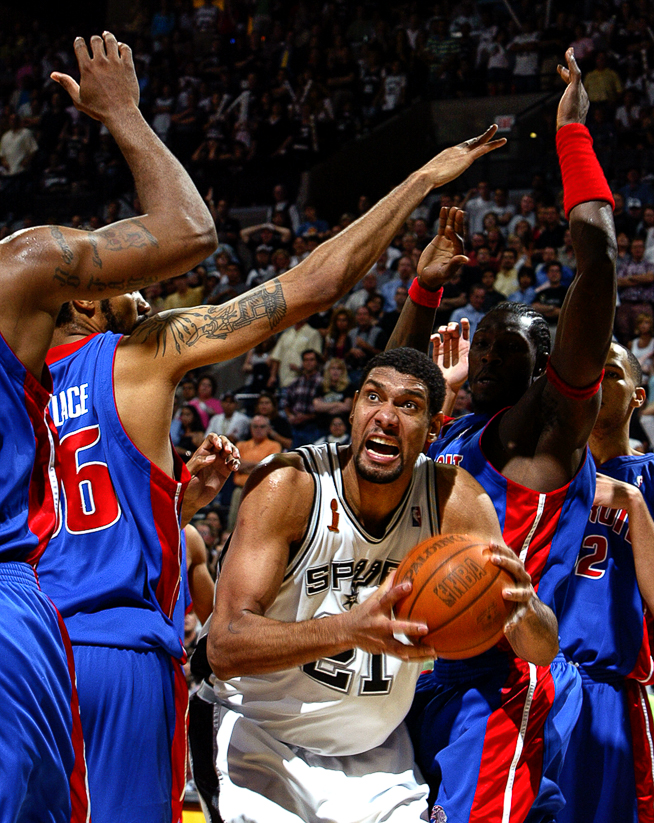 The worst part of covering the Spurs in the NBA finals (at least the first one in 1999…): hanging strobes and remotes in the ridiculously high catwalks of the God-forsaken Alamodome. The elevators only went to the middle mezzanine, and each pack/head/long lens/etc. had to be hoisted up with a rope from the top row of the nosebleeds.   I used eight 2000 w/s Dynalite packs and heads, and about 750-1000 feet of zip line to connect the strobes for the playoffs there. (If they ever tear the building down, I might visit just to spit on the rubble). 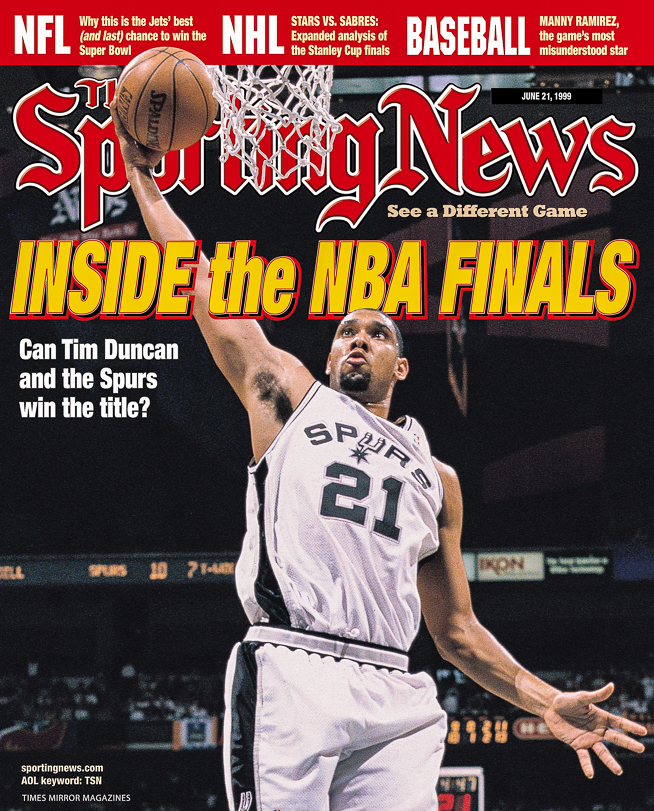 A Sporting News cover of Tim Duncan from 1999. (Photo by Robert Seale) 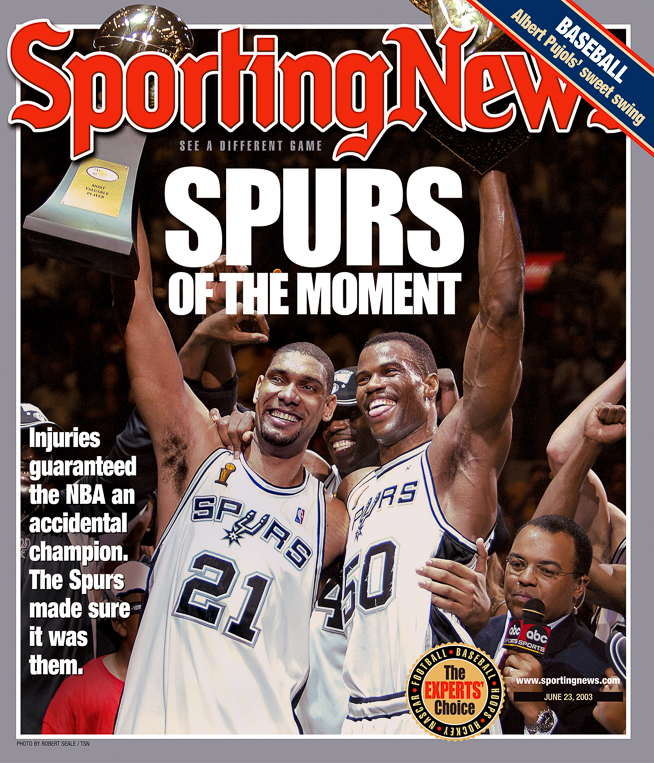 Sporting News cover featuring The Admiral and Tim from 2003. (Photo by Robert Seale) 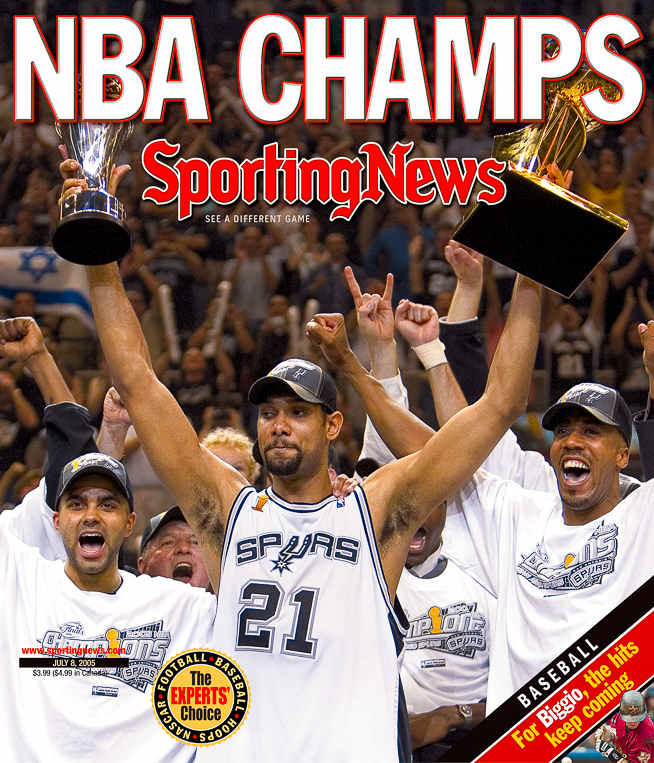 A cover from the Spurs 2005 NBA Finals championship. (Photo by Robert Seale)

After I left the Sporting News in late 2006, I had the good fortune to shoot Tim for a couple of covers while on assignment for Sports Illustrated. In 2013 I photographed him with his teammates Manu Ginobili and Tony Parker during a quick “studio” shoot in a parking garage. We had no more than 5 minutes to shoot the setup, and I had several lighting/background variations to run through. I had a little help, as Tim’s kids climbed all over me during the shoot….his son was hanging piggyback on me making faces, and his daughter was holding up “bunny ears” behind my head to try to get him to crack up. It was awesome! 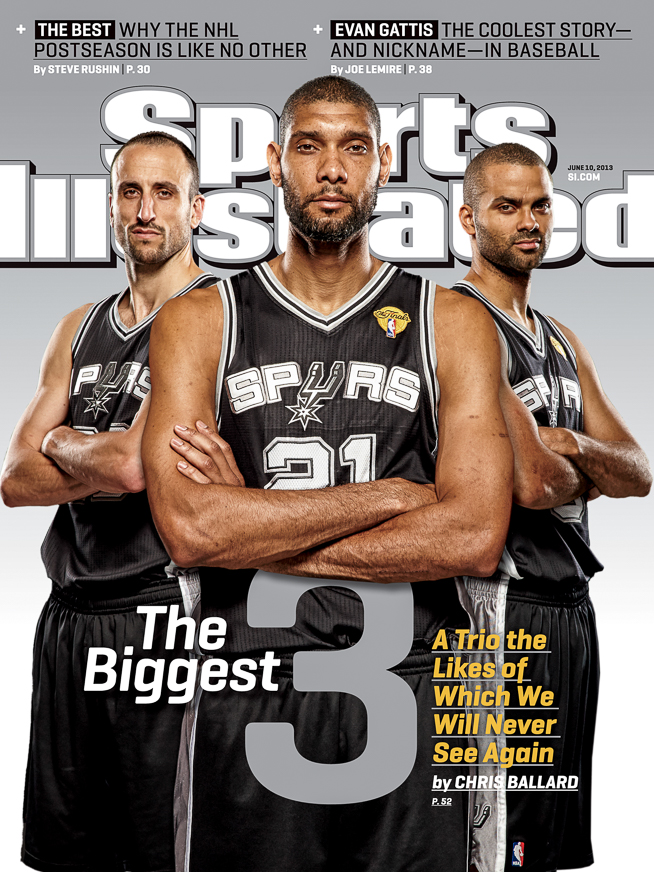 In 2015, we did another SI cover, this time for the NBA Preview issue. We had about 2 minutes with Tim and LaMarcus Aldridge. The concept (which SI carried through to several teams), was to have the newcomer to the team doing a signature move or pose of the team veteran. In Tim’s case, everyone knows he has a ritual in which the referee tosses him the ball, and he hugs it closely for several seconds before tossing it back to the ref for tip off. We managed to get LaMarcus to do the same move with Tim standing with him. There was no levity this time….just Tim with his usual deadpan expression, almost challenging you to try to take a “heroic” image of him. 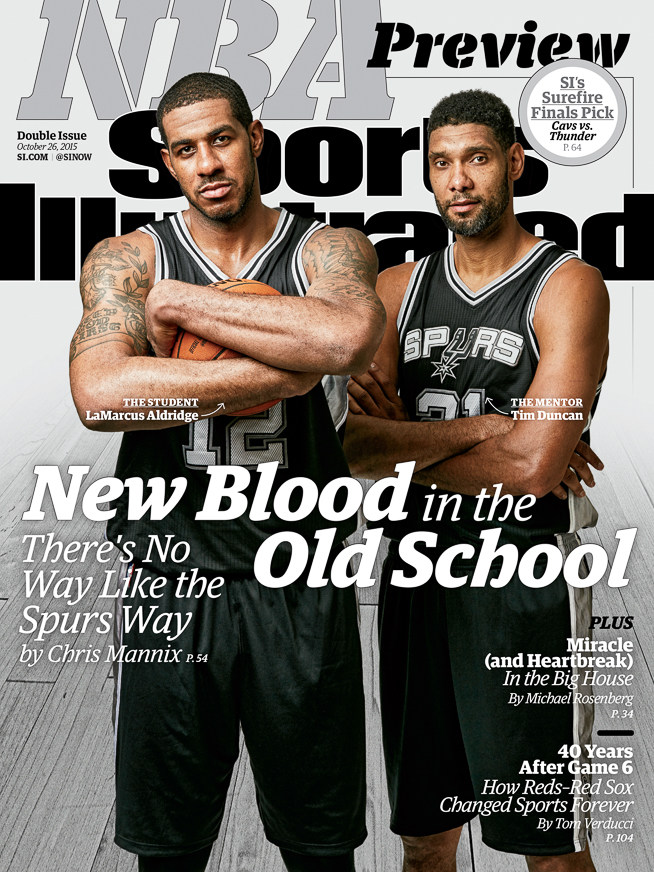 A 2015 NBA Preview cover with Tim and Aldridge. (Photo by Robert Seale)

The shoot was quick, but I took Tim aside at the end and gave him a large print from that first shoot we did together, more than 18 years earlier.

“Wow, man….thanks.”, he said….and then he disappeared quietly. 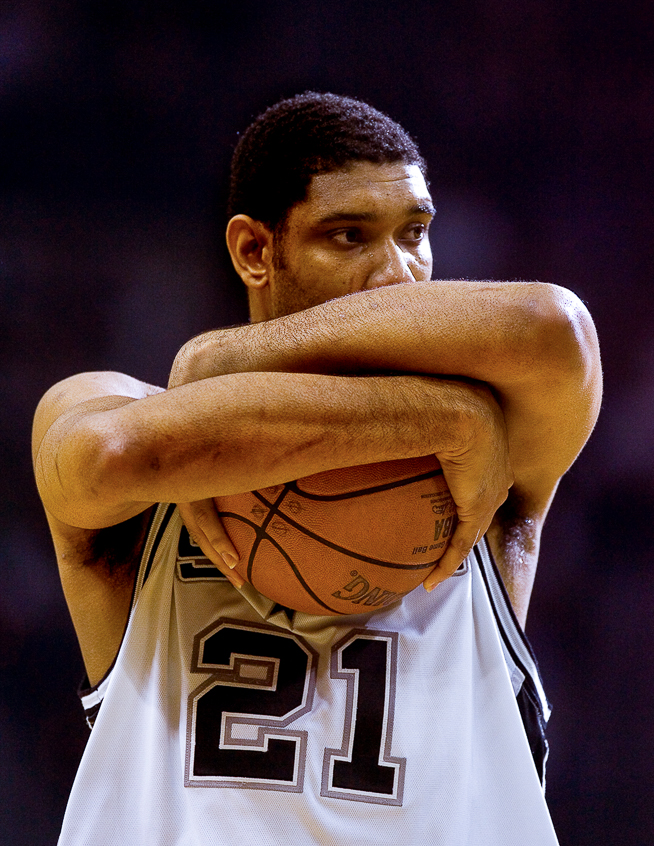 (Photos are © The Sporting News, or © Robert Seale.   Feel free to link back with attribution, but please don't steal my pictures.  Thanks.)