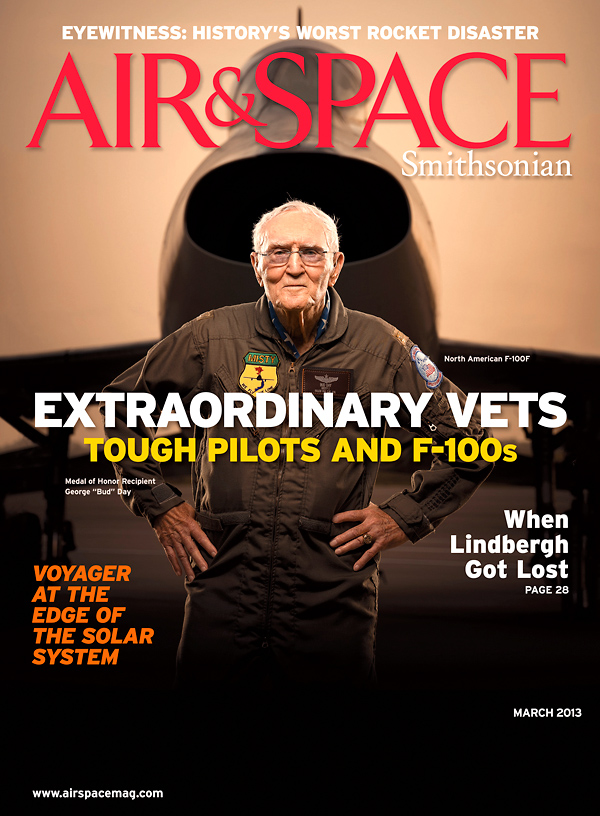 The March cover of Air & Space, with Col Bud Day on the cover.

I've had a keen interest in military aviation since childhood…when other kids were reading Curious George and other children's books, I was reading military biographies and books about World War II and Vietnam. I remember one summer day, when I was in about 3rd or 4th grade, while returning books to our local public library, one of the elderly librarians tried to usher me from the “grown up books” to the “kid's section” on the other side of the building. One of the other librarians quickly corrected her, “He's ok, Mabel….he just returned a book titled Guerilla Warfare and Terrorism. ” After that, Mabel left me alone. (I actually can't remember what her name was…… Mabel just seems like the perfect name for an old lady librarian).

I thought being a fighter pilot would be cool, I even requested info on the Air Force Academy at one point during junior high or early high school. 20/400 vision, however, and projectile vomiting during a simple Cessna 172 plane ride with a friend conspired to keep me out of the ejection seat.

After photographing the Doolittle Raiders a few years ago, one of my friends from the assignment, Matt Jolley, of Warbird Radio recommended me to some of the nice folks at Wings over Houston, the annual airshow here in the Houston area. I had mentioned to him an idea about a personal project, trying to photograph environmental portraits of notable pilots. The people with the autograph tent at WoH were nice enough to let me set up in their area and shoot simple, white background portraits of the pilots who were there signing autographs. I was able to photograph Col. Bud Anderson (a triple ace in the P-51 during WWII), Col. Dick Cole (Doolitle's co-pilot on the WWII Doolittle Raid on Tokyo), Gen. Boots Blesse (a famous Sabre jet ace from the Korean war) and several others during my weekend there. I was also lucky enough to meet and photograph former POW and Medal of Honor recipient Col. Bud Day.

The photos were interesting facial studies, but I lamented the limitations of the white background. I would have loved to have captured each of them with their respective airplanes, but during mid-day sun at a packed airshow, it was just not in the cards. 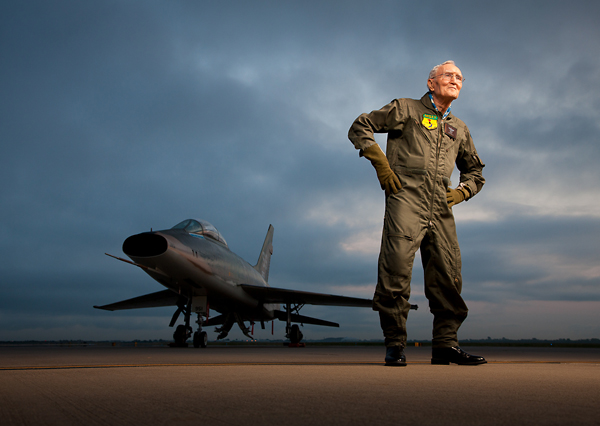 The first shot we took, before sunrise on the field at Ellington.

Several months later, John Simmons, one of my buddies from the WoH event sent me an incredible video of Bud Day, eagerly climbing into the cockpit of an F-100 Super Sabre just like the one he had flown in Vietnam and going up for a flight! The video was from the Collings Foundation, a non-profit foundation that owns and maintains not just World War II era prop planes, but also several Vietnam era jets, at….get this…..Ellington Field in Houston, Texas. The F-100, painted just like Bud's Misty 1 Vietnam bird is one of two in the world in flying condition.

John went to work, getting us permission from Rick Harris of the Collings Foundation to use the airplane. We made arrangements to photograph Bud, who lives in Florida, during a visit to see his son George, a former F-16 pilot, who now works as a SWA captain in Houston.

A few months later, there we were before sunrise on a warm summer morning in Houston, pulling the F-100 out of the hangar and towing it to the proper spot on the taxiway. We had scouted a few days before, using the iphone app LightTrac to position the plane.

Bud showed up in his flight suit, with his boots and Nomex gloves on – he was definitely ready to fly the plane if necessary! His son George also wore his flight suit. Part of my plan was to do a nice group shot of the father and son fighter pilots together.

We started shooting before dawn – long exposures on a tripod with battery powered strobes. Nathan Lindstrom assisted on the shoot and did a great job. We used a Profoto 7B with a Plume Wafer Hexoval 180 on the side, and a Wafer 100 on another 7B boomed in front of the face as a fill. 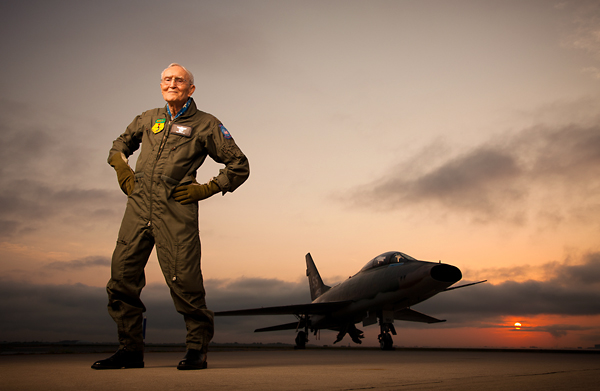 The second shot, with a Wafer Hexoval 180 and a Wafer 100 as the sun rises in the background.

We next moved onto the backlit side of the plane, and photographed the Col.'s Day together and also the elder Col. Day alone, again using the same lighting setup. Fortunately, the sun came out for a few minutes before going back under a layer of clouds. The sunrise was beautiful! 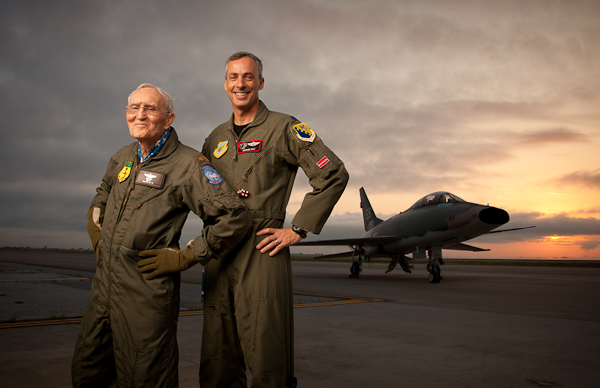 We next moved to a shot with a long lens looking at the signature angle of the F-100 – straight up the open nose air intake. We carefully framed Col. Day in the foreground and backlit him from each side with a Profoto 7B and a Wafer 100 on each side. We then boomed in a Chimera small strip bank powered by an Acute 600. Although 87 years old, and with his body ravaged by years of torture and POW abuse, in this pose, with this light, in front of the F-100, Bud Day looked like he could still kick some serious ass. 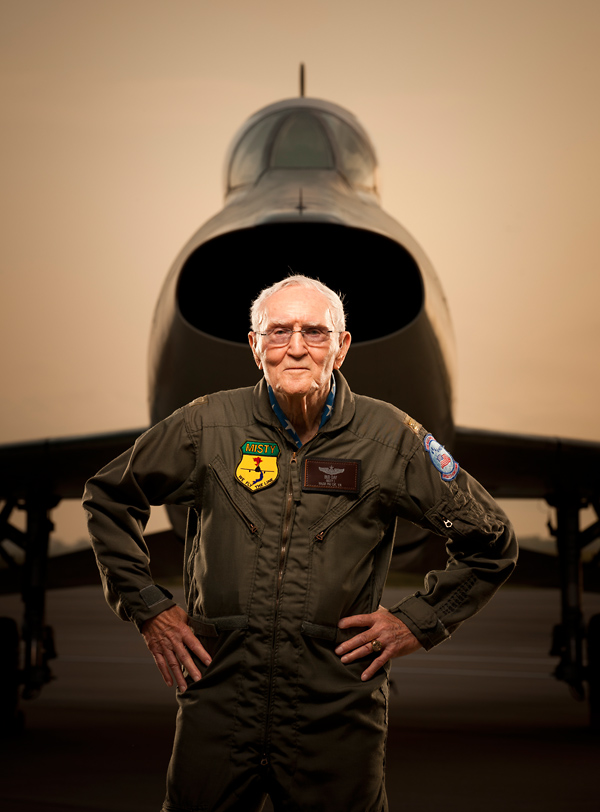 The shot that made the cover, Col. Day still formidable at 87.

We finished with a 3/4 side lit portrait, with his glasses off, which showed off the MISTY patch on his flight suit. 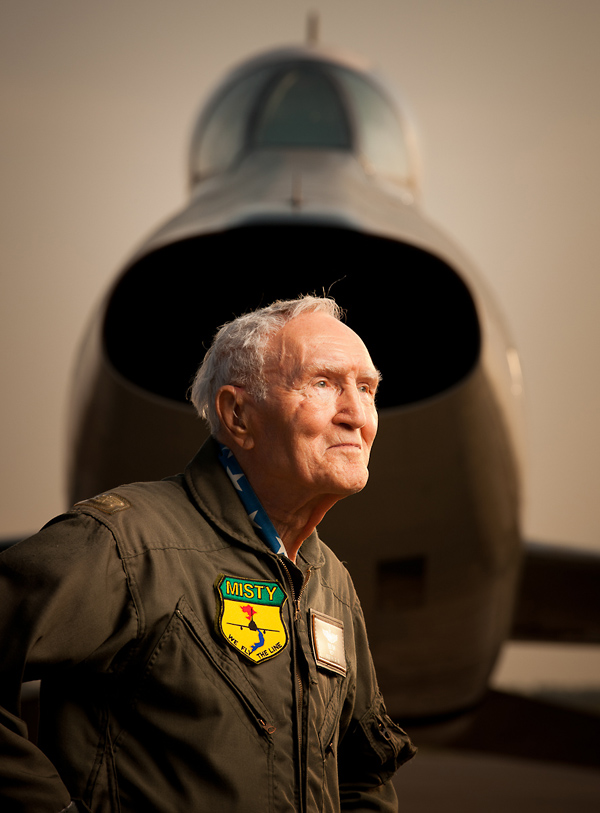 The 3/4 lit portrait with “The Hun” front view in the background.

We did some group shots with the Collings Foundation folks who had so generously donated their time and effort to showcase the plane, and some USAF U-2 pilots, who had gathered during the shoot. All USAF pilots go through survival training at the AF Survival School at Fairchild AFB, named in Col. Day's honor. It was like watching a bunch of NBA rookies meeting Michael Jordan for the first time.

After packing up, the whole crew adjourned to a nearby Ihop for a truly memorable breakfast. I could literally sit and listen to George and his dad tell flying stories for hours. It was a fantastic experience.

The risk of developing Ambien (Zolpidem) dependence increases when the drug is combined with other benzodiazepines. It should be borne in mind that a person should be in comfortable sleeping conditions within 7-8 hours after taking the pills, otherwise anterograde amnesia may occur.

After the shoot, I sent a few of the photos to my editor at Air & Space magazine, just on the off chance that they might be working on a story related to Col. Day, MISTY, or the F-100. Several months later, as it turns out, there was a story on the MISTY program in the works. They eventually decided to use one of the photographs of Col. Day on the cover of the issue, with another one running inside.

I didn't want to jinx anything, so I didn't mention it to Bud or George until the cover was posted online. I've worked for many magazines, and covers often get pulled or changed at the 11th hour.

It was really an honor and a highlight to finally be able to make the call to Col. Day and let him know that not only was there a story on MISTY in the current issue of Air & Space, but that he had made the cover! This was truly one of the coolest things I've been able to work on, and I'm grateful to A&S, the Day family, Rick Harris and John Simmons for making this happen. 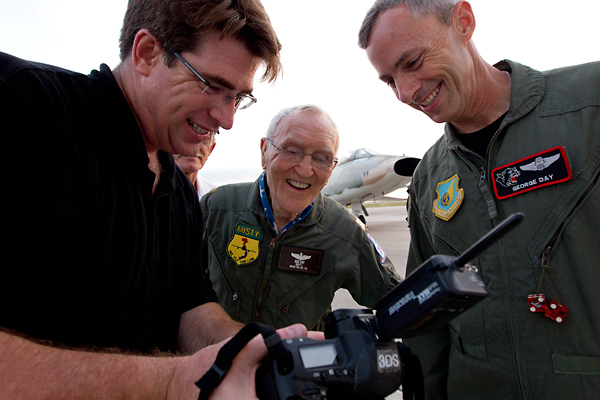 Col. Day and Col. Day reviewing some of the photos with the me.

A little background on Col. George “Bud” Day: He joined the Marines and fought in World War II just after high school. He came back to the US and earned a law degree, then continued in the Air Force flying fighter jets in Korea and eventually Vietnam. He miraculously survived a no-chute ejection the 1950's. At an age and mission count when other pilots were retiring, he volunteered for another tour and came up with the MISTY Fast Forward Air Control (Fast FAC) program, of which he was the commander. MISTY pilots flew low and fast over North Vietnam, marking targets including SAM missile sites for other aircraft to attack. It was so dangerous that it was an all volunteer squadron.

During one of these MISTY missions in 1967, Col. Day was shot down and captured. Badly hurt and barefoot, he escaped after a few days and evaded the enemy for 12-15 days, subsisting on frogs and berries, traversing miles of enemy territory and crossing the river into South Vietnam. He was within a mile or two of an American base when he was shot twice and recaptured. He spent the next 5 years 7 months in the “Hanoi Hilton” being tortured along with other notable POW pilots like Sen. John McCain and Admiral James Stockdale. For his valor, he was awarded the Air Force Cross and the Congressional Medal of Honor. Today he is the most decorated living service member. After returning from Vietnam, he received 13 medical waivers and continued flying. He eventually amassed over 8000 hours – nearly 5000 of those in fighter aircraft. As if that weren't enough, he retired and went to work as an attorney, eventually suing the US Government on behalf of veterans who were not getting promised medical benefits and won. As a result, millions of veterans (my late mother-in-law among them), have benefitted from the program, called Tri-Care for Life.

Here's a cool behind the scenes video my friend John Simmons put together of the shoot: