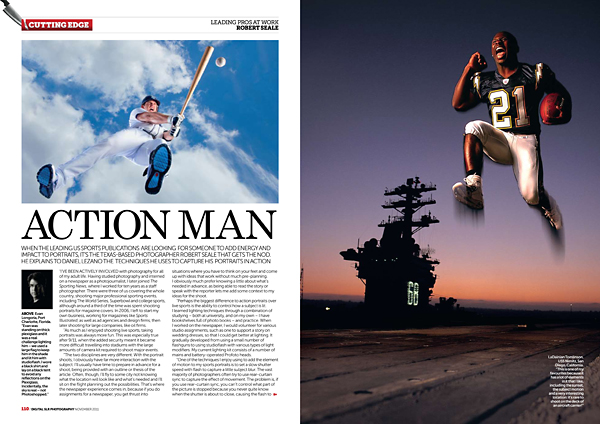 The opening spread in the Nov. 2011 issue of Digital SLR 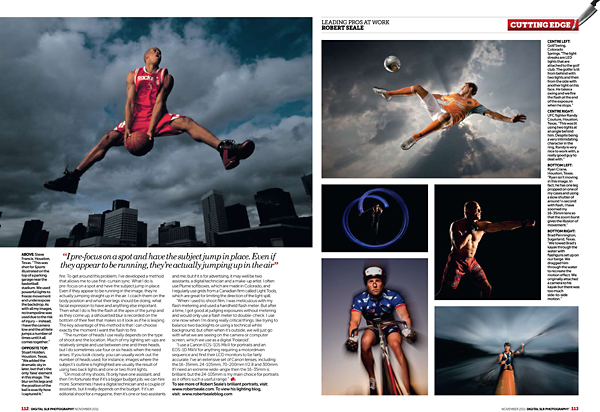 Yep, you guessed it – the second spread…

I'm featured in the November 2011 issue of Digital SLR magazine, a photo magazine published by Dennis Publishing in the UK.  It's available at most camera stores, Barnes and Noble and fine bookstores/magazine shops everywhere.

Daniel Lezano did a great job with the article, and translated a few of my quotes to add Brit-speak (“brilliant, kit, flashgun”), but other than that it's pretty much what I said.  Big thanks to them for asking me to be a part of it.

Here's the text from Daniel's article:

When the leading US sports publications  are looking  for someone to add energy and impact to portraits, it’s the Texas-based photographer Robert Seale that gets the nod.  He explains to Daniel Lezano the  techniques he uses to capture his  Portraits in Action:

“I’ve been actIvely Involved with photography for all of my adult life. Having studied photography and interned on a newspaper as a photojournalist, I later joined The Sporting News, where I worked for ten years as a staff photographer. there were three of us covering the whole country, shooting major professional sporting events, including the World Series, Superbowl and college sports, although around a third of the time was spent shooting portraits for magazine covers.

In 2006, I left to start my own business, working for magazines like Sports Illustrated, as well as ad agencies and design firms, then later shooting for large companies, like oil firms.  “As much as I enjoyed shooting live sports, taking portraits was always more fun. this was especially true after 9/11, when the added security meant it became more difficult travelling into stadiums with the large amounts of camera kit required to shoot major events.  “the two disciplines are very different. With the portrait shoots, I obviously have far more interaction with the subject. I’ll usually have time to prepare in advance for a shoot, being provided with an outline or thesis of the article. often, though, I’ll fly to some city not knowing what the location will look like and what’s needed and I’ll sit on the flight planning out the possibilities. That’s where the newspaper experience comes in, because if you do assignments for a newspaper, you get thrust into situations where you have to think on your feet and come up with ideas that work without much pre-planning. I obviously much prefer knowing a little about what’s needed in advance, as being able to read the story or speak with the reporter lets me add some context to my ideas for the shoot.

“Perhaps the biggest difference to action portraits over live sports is the ability to control how a subject is lit. I learned lighting techniques through a combination of studying – both at university, and on my own – I have bookshelves full of photo books – and practice. When I worked on the newspaper, I would volunteer for various studio assignments, such as one to support a story on wedding dresses, so that I could get better at lighting. It gradually developed from using a small number of flashguns to using studioflash with various types of light modifiers. My current lighting kit consists of a number of mains and battery-operated Profoto heads.  “one of the techniques I enjoy using to add the element of motion to my sports portraits is to set a slow shutter speed with flash to capture a little subject blur. The vast majority of photographers often try to use rear-curtain sync to capture the effect of movement. the problem is, if you use rear-curtain sync, you can’t control what part of the picture is stopped because you never quite know when the shutter is about to close, causing the flash to fire. To get around this problem, I’ve developed a method that allows me to use first-curtain sync. What I do is pre-focus on a spot and have the subject jump in place.  Even if they appear to be running in the image, they’re actually jumping straight up in the air. I coach them on the body position and what their legs should be doing, what facial expression to have and anything else important.  Then what I do is fire the flash at the apex of the jump and as they come up, a silhouetted blur is recorded on the bottom of their feet that makes so it look as if he is leaping.  The key advantage of this method is that I can choose exactly the moment I want the flash to fire.

“The number of heads I use really depends on the type of shoot and the location. Much of my lighting set-ups are relatively simple and use between one and three heads, but I do sometimes use four or six heads when the need arises. If you look closely, you can usually work out the number of heads used, for instance, images where the subject’s outline is highlighted are usually the result of using two back lights and one or two front lights.  “On most of my shoots, I’ll only have one assistant, and then I’m fortunate that if it’s a bigger budget job, we can hire more. Sometimes I have a digital technician and a couple of assistants, but it really depends on the budget. If it’s an editorial shoot for a magazine, then it’s one or two assistants and me, but if it is for advertising, it may well be two assistants, a digital technician and a make-up artist.

I often use Plume softboxes, which are made in Colorado, and I regularly use grids from a Canadian firm called Lighttools, which are great for limiting the direction of the light spill.  “When I used to shoot film, I was meticulous with my flash metering and used a handheld flash meter. but after a time, I got good at judging exposures without metering and would only use a flash meter to double-check. I use one now when I’m doing really critical things, like trying to balance two backlights or using a technical white background, but often when it’s outside, we will just go with what we are seeing on the camera or computer screen, which we use as a digital ‘Polaroid’.

“I use a Canon EOS-1dS MkIII for portraits and an EOS-1d MkIv for anything requiring a motordriven sequence and find their lcd monitors to be fairly accurate. I’ve an extensive set of Canon lenses, including the 16-35mm, 24-105mm, 70-200mm f/2.8 and 300mm.  If I need an extreme wide-angle then the 16-35mm is brilliant, but the 24-105mm is my main choice for portraits as it offers such a useful range.” 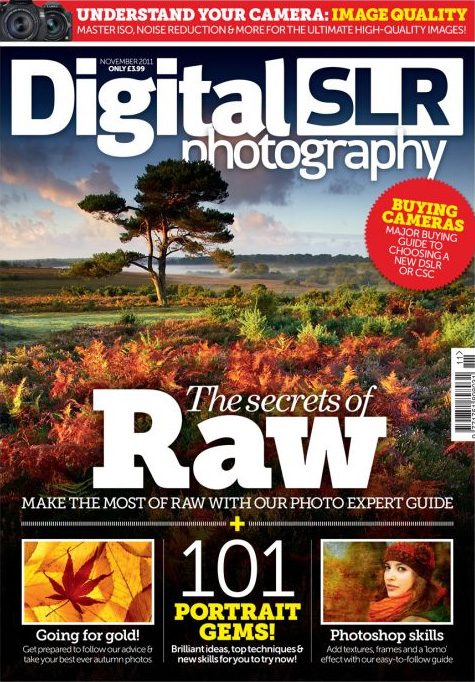 The cover. Not my photo, but in case you're looking for the issue…