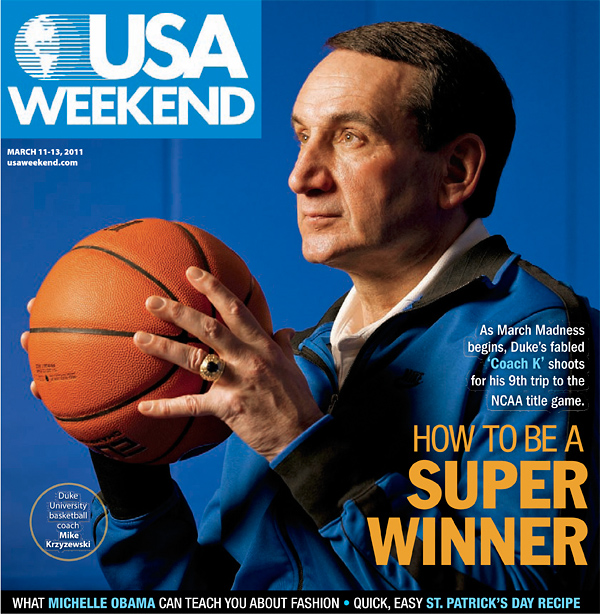 Since March Madness is in the air, I thought now would be a great time to share a shoot I recently did with Mike Krzyzewski at Duke.   The assignment was a cover story for USA Weekend magazine (a Sunday newspaper insert with a whopping circulation of over 22 million!).

“Coach K”  (yes, we all have trouble spelling his name…) is an icon at Duke (currently # 3 in the AP top 25), and a Number 1 seed in the west bracket of the 2011 NCAA Tournament, and he's led the Duke Blue Devils to 4 NCAA Championships and 11 Final Four appearances.  He was elected to the Naismith Basketball Hall of Fame in 2001, when his current crop of players were 8-9 years old.

Because of Coach K's demanding schedule and celebrity status on campus (he apparently gets mobbed when he lingers on campus too long), we elected to shoot him inside the controlled environment of the Duke practice facility (the main floor at Cameron was in use).

We had a tight 15-20 minute window, and needed several looks – at a minimum, we needed  a cover image and an inside photo for the magazine. 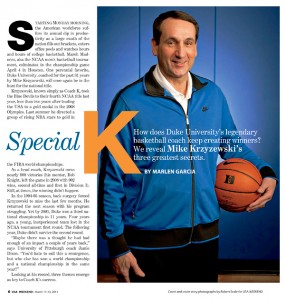 The open "corner lighting" setup - used as the opener inside

One of the critical things about shooting a cover, is finding ways to simplify the picture – particularly the background, so that the composition works with the publication's logo, and that there is enough room for the various cover lines.  An added challenge, in the case of a Sunday insert is keeping tones and colors in a range that is printable by literally hundreds of different newspaper printing facilities all over the country.

On this shoot, I had the added treat of working with a vastly overqualified “assistant”, my old Sporting News photographer colleague Bob Leverone.  He was not only a big help with pulling off the shoot, but he also took me on a short Carolina BBQ tour after we wrapped.  (Sidebar:  We sampled pulled pork at four of North Carolina's most famous cue joints around the state, but the best by far was the barbeque we had at Dan Huntley's place.  Huntley is the author of Extreme Barbeque, and a former Charlotte Observer columnist.  He is the real deal, and I'm a BBQ snob from Texas…. …ok, end of sidebar – back to the shoot.)

We settled on three lighting setups:  a simple, blue padded background with fairly open corner lighting with a graduated “glow” in the background; a second, more dramatically lit setup with a row of sideline chairs; and an elevated look from a ladder with a simple background of court flooring.

For the cover, the photo editor (a longtime client, and wonderful guy to work with, who also accompanied us on the shoot)  chose a dramatic tight shot of Coach K with a ball looking off camera, taken during our more dramatic setup with the chairs.  We shot it with a Plume Wafer 100 with a 30 degree Lighttools grid, and a bare reflector head aimed at the wall behind him.

I'll talk more about my corner lighting setup in an upcoming post.

Best of luck to Coach K and Duke in this month's tournament.  Perhaps he'll get to visit us here in Texas later this month at the Final Four! 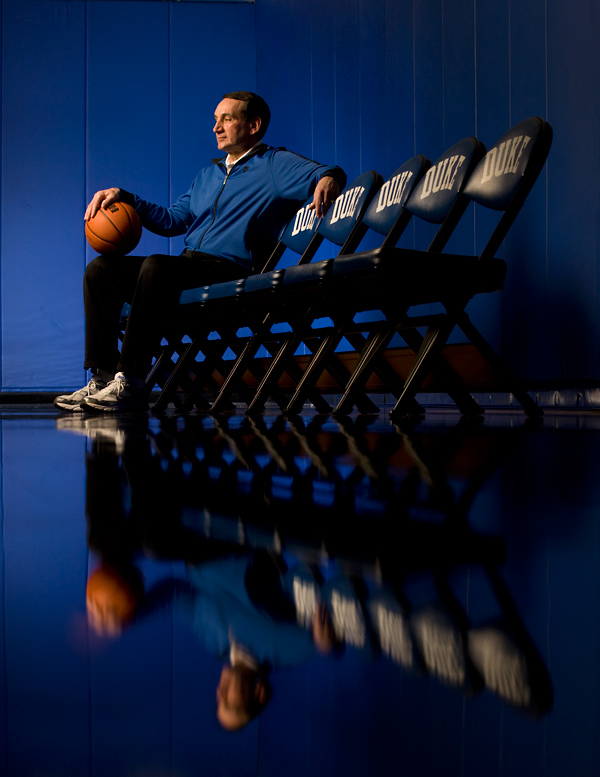 A pensive Coach K, taken with a Wafer 100 with a 30 degree Lighttools grid.