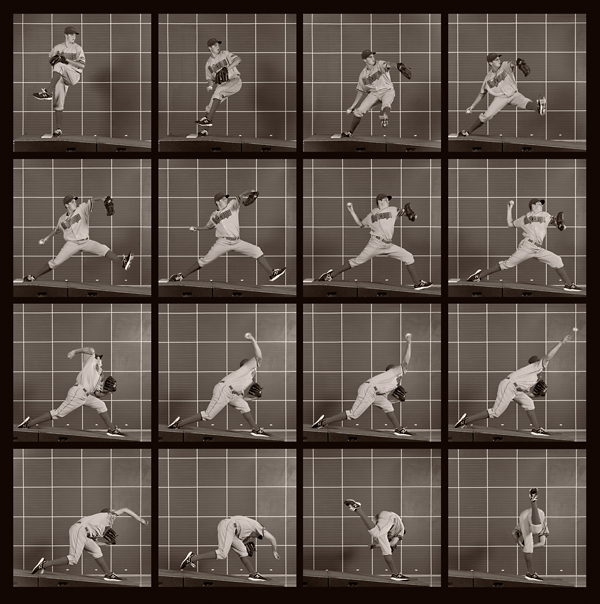 Trevor Bauer, a pitching prodigy from UCLA, recently drafted third in the 2011 MLB draft by the Arizona Diamondbacks, is known for his unconventional pitching motion and training philosophy.  He's been compared to another wildly successful, yet undersized pitcher: Tim Lincecum of the SF Giants, who generates torque by rotating his hips, arms and legs in a whip-like motion, allowing him to pitch as fast as some of his taller, more muscle-bound counterparts in the major leagues.

When I originally got the call to shoot Bauer for Sports Illustrated, the photo editor, Nate Gordon and I discussed shooting a stroboscopic sequence on a black background, much like the work of Life Magazine photographer Gjon Mili.   I had done this type of shot before, in fact my first cover for the Sporting News was a stroboscopic photo of Mets pitcher Pete Harnisch. 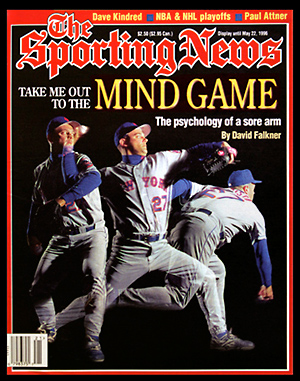 My first Sporting News cover: circa 1996.

I first learned about Mili and his work during college.  I took about 27 hours of art history classes  (is that enough for a third major?).   The most memorable one was my mentor, Dr. Michael Roach‘s “History of Photography” class.  Presented chronologically, each class featured a wonderful slide show and biographical talk about pioneering photographers.  Each day we would tackle the work of two-three new photographers, and it was really great to go out and shoot later in the day, channeling the styles you had absorbed by osmosis that morning and trying to emulate that photographer's look in your own photographs.

It's great to formulate and grow your own style, but I think it's equally important to know the history of our craft, learn all those techniques, and have them in your toolbox for when you're called upon to provide a specific look.

In addition to Mili, one of those early photographers that Dr. Roach introduced us to was the pioneering motion sequence photographer Eadward Muybridge.  Muybridge, using a series of cameras triggered in sequence, put together grids of individual photographs featuring motion studies of humans, horses, and other animals.  There's not an animator or artist who doesn't own a dog eared copy of Muybridge's “The Human Figure in Motion”, first published in 1907.

Anyway, I mentioned I had also been wanting to try a Muybridge homage, and perhaps Bauer's motion was a good chance to explore the idea.  Nate liked the idea, and after pitching it to Director of Photography Steve Fine, gave me the go ahead to put the shoot together.  One wrinkle in this was that Bauer had not yet been signed to a contract by the diamondbacks at the time of our shoot.  That meant that we had to literally scour the country to piece together a Diamondbacks uniform from several different vendors for him on short notice.

Bauer's pitching coach Ron Wolforth, helped us find a nearby high school gym to set up the sets for both shots.  Assistant Nathan Lindstrom morphed into a master set builder for this one, designing and erecting a huge plywood wall, that we painted a neutral gray.  We used white tape for the larger grids and chalk pencils for the smaller lines between the grids, and set up the wall in the gym.

Next to that, we erected essentially a cube of black 20 x 20 overheads.  For the Mili shot, it was important that Bauer be rim lit from behind in a pitch black environment.  We used two Plume Wafer 100's with Lighttools grids to accomplish this, and then added a third light to put a little more light on Bauer's profile.

For the Muybridge shot, we took off the grids, and lit the set essentially from the front with the lights at 45 degree angles to the wall.  Muybridge's shots were lit with sunlight, and there were often imperfections and shadows on the walls of his photos, so we didn't want to make the lighting too slick or neat.  We were going for authenticity.  Both setups were lit with Profoto 8A‘s.

The Bauer pitching sequence shot in our black 20 x 20 “cube.”

We monitored the shoot with a tethered Mac laptop, so we could keep track of sequences and make sure we had all the different body positions needed to put together the Muybridge grid.  With stroboscopic photos of a baseball pitch, you can't fire the strobe more than 3-4 times, or the picture turns into a big busy mess.  for this reason, we actually shot the photo as a stroboscopic sequence, and also separately with individual photos, which could then be pieced together into a panoramic sequence by a retoucher.

Although the Muybridge homage photo ran in color in the magazine, I actually prefer it in sepia tone, which I think better evokes the mood of his pioneering work in photography.

(Assistants Nathan Lindstrom and Todd Spoth really busted their tails on this, and Todd put together a great Go-Pro time lapse of the shoot.)