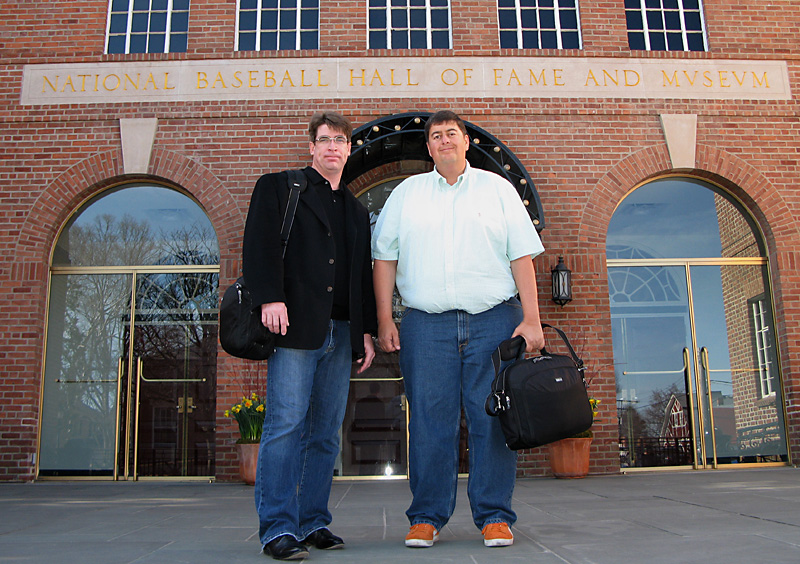 Robert Seale and Brad Mangin at the entrance to the Baseball Hall of Fame in Cooperstown.

I recently visited the Baseball Hall of Fame in Cooperstown, New York, where I was asked to speak with my good friend and colleague, Brad Mangin at the first annual “Baseball Photography Education Day.” Brad and I gave two different presentations during our visit to the museum: a presentation on the history of baseball photography through the years, and another program, delivered together, of our own work. 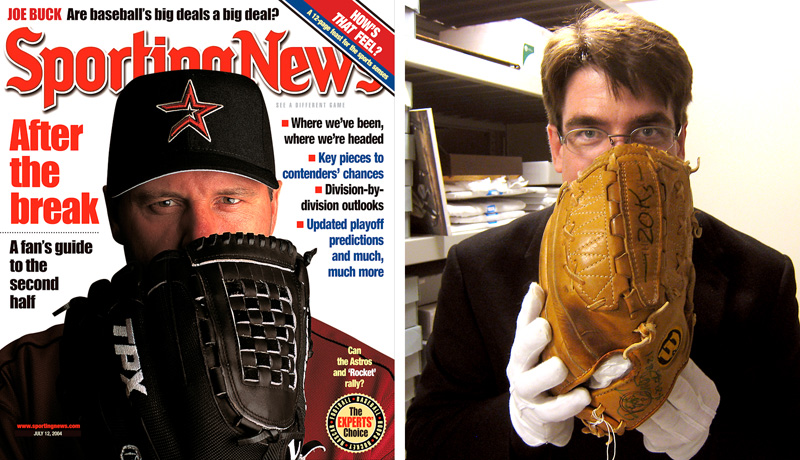 LEFT: One of my cover portraits of Roger Clemens from 2004. RIGHT: Me holding the actual glove from his April 29, 1986 20 strikeout game.

I worked at a national magazine, The Sporting News (the nation’s oldest sports magazine (founded in 1886), once known as the Bible of Baseball), for nearly 11 years, so I showed a selection of my portraits from my time there, and some of the work I’ve done for Sports Illustrated and ESPN since I left TSN in 2006.

Brad has worked for Sports Illustrated and MLB for over 20 years and has a fabulous body of action photography work.  We’re good friends, covered many events together, and have talked a lot of baseball over the years, so we thought it would be interesting to present our program together, mixing up the sequencing of the images, and  trading stories about players during the show.

The baseball history talk was a lot of fun to present.  Brad did most of the work researching and gathering  the photos, and it was great fun to help him put the show together, tell stories, and honor all the great photographers we respect so much.  The show featured historic baseball photography, beginning with Charles Conlon’s iconic images, work from mid-century greats like Ron Kuntz, (who came from Cleveland to see the show!!!), Hy Peskin, and Louis Requena; some cool early Sports Illustrated work from the 60’s by Walter Iooss; photographs from the 70’s and 80’s by Michael Zagaris, Rich Pilling, V. J. Lovero, and Chuck Solomon, and modern work from Brad and myself.  Stephen Light, from the Museum, was on hand to show off classic cameras, including an old 70mm Hulcher High-Speed Camera from the late 1950's. 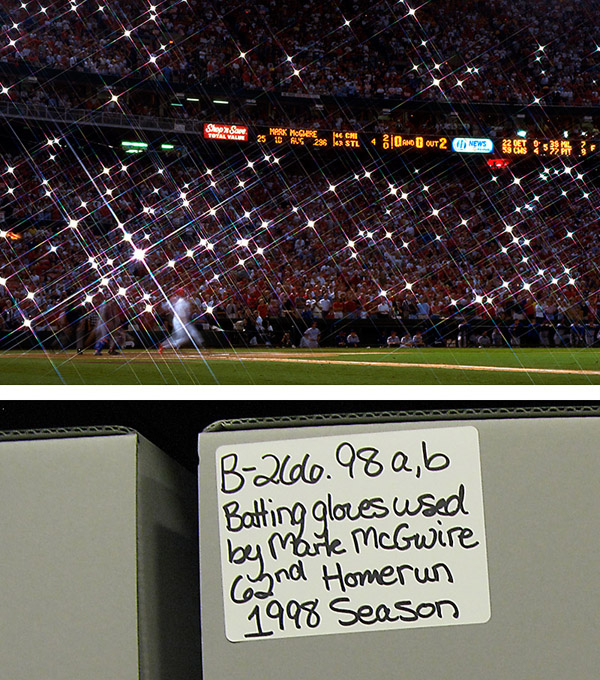 TOP: My photo of Mark McGwire's 62nd home run. BOTTOM: The cooresponding box in the BHOF basement, with McGwire's batting gloves from that night.

One of the coolest parts about visiting the Hall of Fame was the great “Behind the Scenes”  tour arranged by librarian Jim Gates and  archivist Sue Mackay, who showed us all sorts of  artifacts and documents normally not on display to the public. 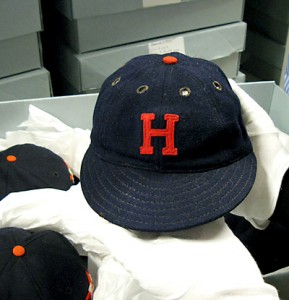 Former MLB Photo Editor (and Cooperstown native) Paul Cunningham, as well as my wife, Houston Chronicle photojournalist  Karen Warren, joined us for the basement tour.  We were able to see and hold in our (white gloved) hands great old artifacts, like the original lyrics to “Take Me Out to the Ball Game,” the “Curse of the Bambino” canceled check that sent Babe Ruth from the Red Sox to the Yankees,  bats from Ted Williams, Babe Ruth, and Honus Wagner, and gloves, bats, balls, and uniforms from a host of other famous players.  It was really neat to see items from games and players that we had both covered.

Brad, a lifelong Giants fan, was interested in seeing memorabilia from Mays and McCovey, while I actually got to hold and touch a wool 1930's era Houston Buffs hat.  It was a real treat, and Sue and Jim were very gracious to put the tour together for us.

If you're really bored and have a few moments, check out a few more of my favorite baseball images in a simple slide show here.