Shooting on Plexiglas for the SI Baseball Preview 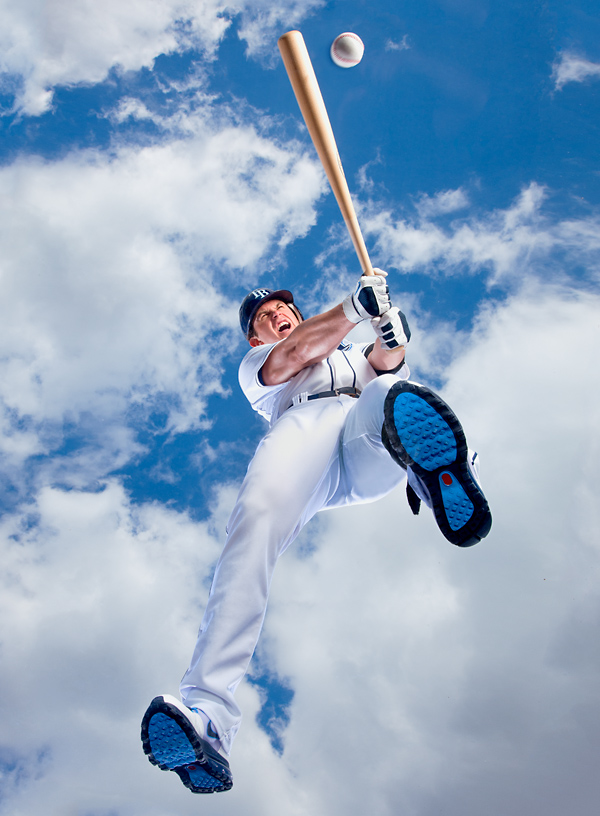 Tampa Bay Rays slugger Evan Longoria's swing, through 1.25″ thick Plexiglas. ©2011 Robert Seale[/caption] I recently photographed Evan Longoria of the Tampa Bay Rays in mid-swing through Plexiglas for the Sports Illustrated Baseball Preview issue.  I photographed a similar shot of Houston Rockets center Hakeem Olajuwon years ago, and I ‘ve wanted to update that portrait for quite some time (it's so old, he was actually wearing LA Gear shoes!).  The cool photo editor at SI remembered my Hakeem photo and asked me to produce a similar shot of Longoria.  Just to prove that there are very few new ideas in this world, he sent me an awesome John Zimmerman photo of Ted Williams from the 1950's taken from below his feet through a glass floor! The Longoria portrait was part of a series on baseball players who are the best in the league at hitting a certain pitch:  best curveball hitter, best fastball hitter, etc. The essay was parceled out to several different photographers since some of the players were in Arizona and some were at Spring Training in Florida. [caption id="attachment_713" align="alignleft" width="300"] 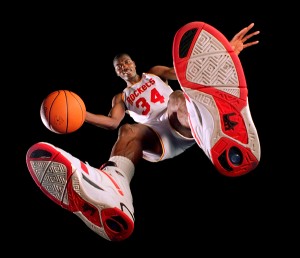 Check out Hakeem's “LA Gear” kicks.[/caption] It took several days of pre-production phone calls to source our 1.25 inch thick, 5′ x 8′ sheet of optically clear Plexi.  We finally found a piece in Ft. Lauderdale, and had it trucked in for the shoot.  It wasn't cheap. Cy Cyr, a great SI assistant from Orlando who I've worked with many times over the years, helped out by picking up our additional rental gear, and then accompanying me to the Rays  Spring Training location in Port Charlotte.  Armando Solares and Chip Litherland, both great photographers from Sarasota, agreed to help out as well.  A 400 lb , 5′ x 8′ sheet of Plexiglas is incredibly heavy and difficult to move, so we needed all that extra muscle to assemble the set. When I did the Hakeem picture, we placed the Plexi on a set of wooden boxes that were only 2-3 feet off the ground, which limited our lens choice to a super-wide, and it really was not enough room to work properly.  This time, I decided to erect a platform of heavy-duty construction scaffolding, which gave us an elevation of five feet.  At that distance, I was able to use a variety of lenses. Once the scaffolding was delivered and assembled, we unloaded the glass (which took 6 people), secured everything, and strapped it to the scaffolding.  Ground stakes with cargo tie-downs and a ton of sandbags made the whole set very safe and secure.  The last thing I needed was to injure the Rays star player! The biggest issue with shooting a photo like this is unwanted reflections.  We covered the inside of the scaffolding, ground, and back of the set with black drape, essentially creating a “black box” for me to shoot from.  For lighting, we used a Plume Wafer Hexoval 140 (the medium one) as our main light, positioning it just above the plexi, but a little lower than usual to illuminate Evan under his hat.  We then added a medium stip bank with a 40 degree grid, from below the glass, right behind my head.  This light gave us some fill, and illuminated the soles of Longoria's shoes.  We used two lights from behind the set with regular reflectors to outline Longoria and his bat, and separate him from the background.  All of the lights used were Profoto 7B's. [caption id="attachment_710" align="alignright" width="300"] 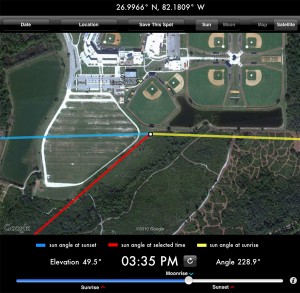 LightTrac is an awesome tool for planning a shoot.[/caption] Once we had everything set, we peeled the protective adhesive paper off the plexiglas, shot some tests (in socks!), and did our final preparations before Longoria arrived.  The time of day was not ideal:  we were shooting at 3:30pm, rather than 5pm, so the sun was still a problem. although we had chosen our location carefully based on recon from the Ipad app LightTrac (which shows the sun path on a google map satellite photo), we still had some sunlight to deal with. We erected an 8 x 8 on Matthews hi-rollers to block the sunlight , although we did toy with the prospect of putting Cy in a tractor bucket with a large golf umbrella, due to the heavy winds in the area.  Armando and Chip did a great job of keeping the 8×8 from blowing away during the shoot. We had about 30 minutes for the shoot, and Longoria was great during the whole thing.  He even got into it at the end and started making some great faces, screaming while pretending to knock the cover off the ball. Check out the cool time lapse video that Cy shot for us which chronicles the entire shoot start to finish. Robert Seale photo shoot time lapse from Robert Seale on Vimeo. And, yes, of course – we had to shoot some pictures of ourselves as well! [caption id="attachment_711" align="aligncenter" width="600"] 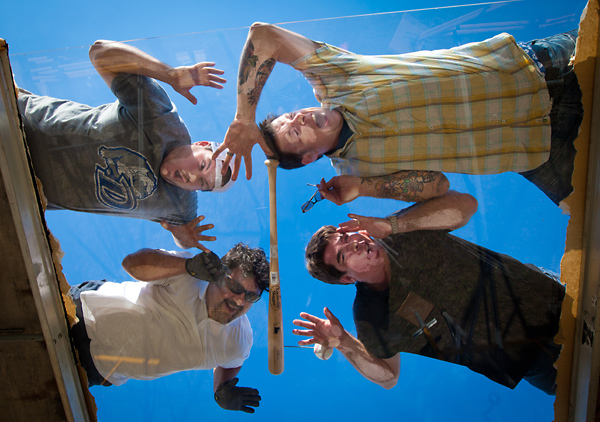 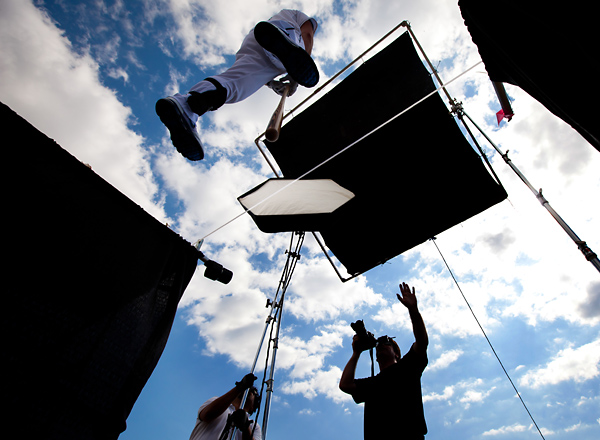 A cool view from underneath. (Photo by Chip Litherland)[/caption]