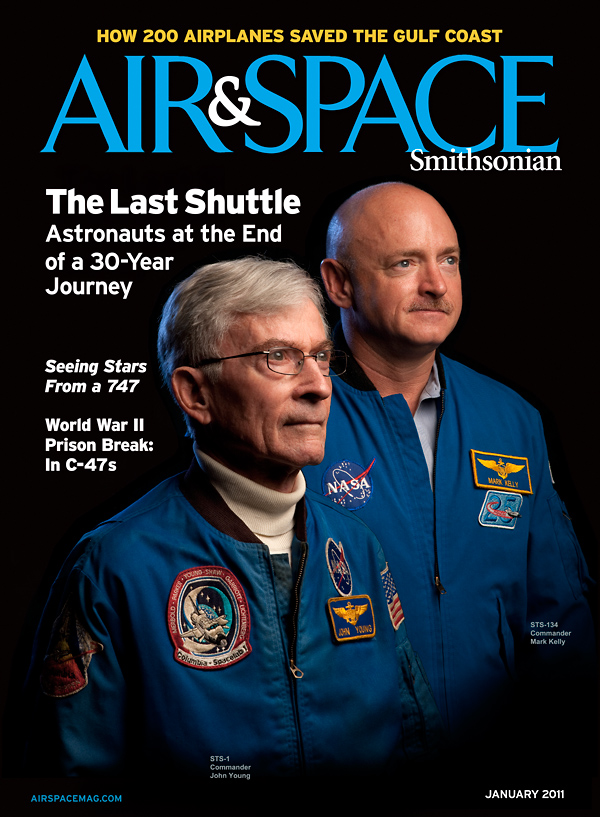 I was very excited to be able to shoot the January cover of Smithsonian's Air and Space magazine.  I shot this assignment last summer during one of two, aproximately 1-hour photo sessions with current and former Shuttle astronauts (more on the rest of the shoot later), at the Johnson Space Center in Houston.

The cover was to feature the first and last Space Shuttle commanders, John Young (STS-1), and Mark Kelly (STS-134).  NASA has since added another mission, STS-135, to the schedule so our premise about first and last became a cover and 8-page photo essay of astronaut portraits during the 30th anniversary of the Space Shuttle program.

We had very little time to shoot the cover and subsequent inside images due to Kelly's busy training schedule, so we arrived early and prepared two backgrounds….a black cloth background and a large white seamless.  Robert Crippen, Young's pilot on the first Shuttle mission, arrived early, so we spent a few minutes photographing him on both backgrounds.

I knew that Young would probably show up in his signature white turtleneck and blazer, and that Kelly would very likely be wearing a polo shirt (the outfit in which astronauts commonly work and train).  For a cover, especially a fairly tight portrait, I knew it would be important to have something in the picture that “says NASA” so I asked both men, through the astronaut office, to bring their blue nomex NASA-issued flight jackets.  I wasn't sure that they would both remember to bring their jackets (I was really nervous that Young might not still have his).  I was anxious about this small detail, but relieved when Kelly showed up first, carrying his.   I was overjoyed when Young turned the corner into our building carrying a weathered NASA flight jacket just like Kelly's.  It may sound like a small detail, but it was critical – and really the only thing that holds the picture together for a cover, and makes the photo something other than two men wearing blue blazers.  I think I actually jumped up and down in front of the NASA media rep.

We had the black background pre-lit with a Plume Wafer Hexoval 180 on the right as our main light, and a Wafer 100 with a Lighttools grid as our “hairlight” on the left behind them.  We fitted the hairlight with a slight blue gel, which I thought would look good, and closely match the blue flight jackets – outlining the shapes of the subject heads against our black background.

For some reason, I really like pictures of people looking off camera, with no eye contact.  To me it just feels more heroic and formal.  This was a perfect and appropriate opportunity to use that pose, so in addition to shooting portraits with eye contact, I had both men look off camera, up into the Hexoval 180 for the heroic portrait fitting the first and last commanders of the Shuttle program.  It was honor to meet them and photograph them.

(Note: A month after this cover was released by Air & Space, Mark Kelly's wife, US Representative Gabrielle Giffords was critically injured in a mass shooting in Tucson, Arizona.  Kelly has been by her side throughout her ordeal, and has only recently returned to training for STS-134, after she was moved to a rehab facility in Houston.  Our thoughts and prayers are with Giffords and Kelly, and we hope she makes a speedy and full recovery.)