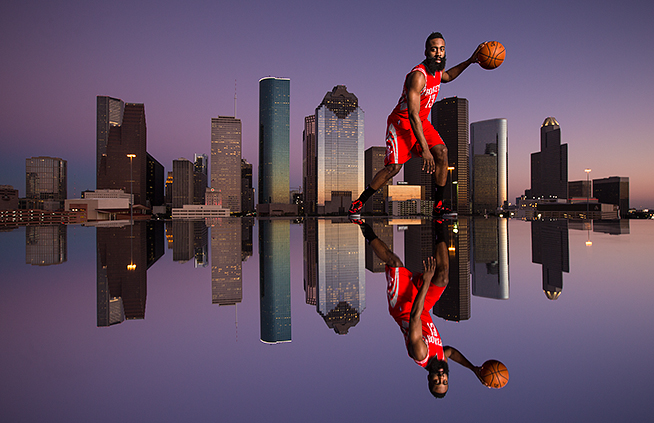 I’ve dreamed about shooting Houston Rockets guard James Harden for a long time. How can you go wrong with THAT BEARD? He’s just awesome looking. I wanted to pose him with ZZ Top for the last couple of years…or at least with Billy Gibbons, but alas, no one has bitten on that idea yet. (You hear that Texas Monthly? It would be a great cover, trust me….).

Anyway, the call finally came a couple of weeks ago from Sports Illustrated. Harden had a super tight schedule with the All-Star Break coming up, and the editor asked if we could put together something with the iconic Houston skyline with only 24 hours notice.

I suggested a view from the traditional western side…there are great spots along Allen Parkway and Memorial Drive where the buildings separate and line up well. Yes, it’s been done, but it really is a great angle.  (Sidebar:  I may sound like a homer, but Houston's western skyline is among the best I've seen in the world – right up there with Dallas, Chicago, Shanghai, and Doha in the manner that the skyscrapers line up and separate in a photograph.  It's the result of a late 70's-early 80's skyscraper building boom that hasn't been matched in the US since.)

The editor already had a specific view in mind (slightly north a bit, but also very nice – and much closer to the buildings), and we referenced a rooftop fashion shot I had taken a few years earlier from that same spot.  On the plus side when using a parking garage roof, you can control access which is a plus when working with a pro athlete.  If we had done this out in the park, we might have gathered a crowd and needed more security guys.

While the editor was pitching the idea to the Rockets, I called the building with the rooftop parking deck we had used a few years earlier to ask for permission. Then I went by to see the manager in person and deliver a check for a location fee. Done.

I researched the shoot from a few years earlier and put in calls to my Plexiglas shop and found out they didn’t have what we needed, but could ship it in by noon the next day from Dallas. Done. 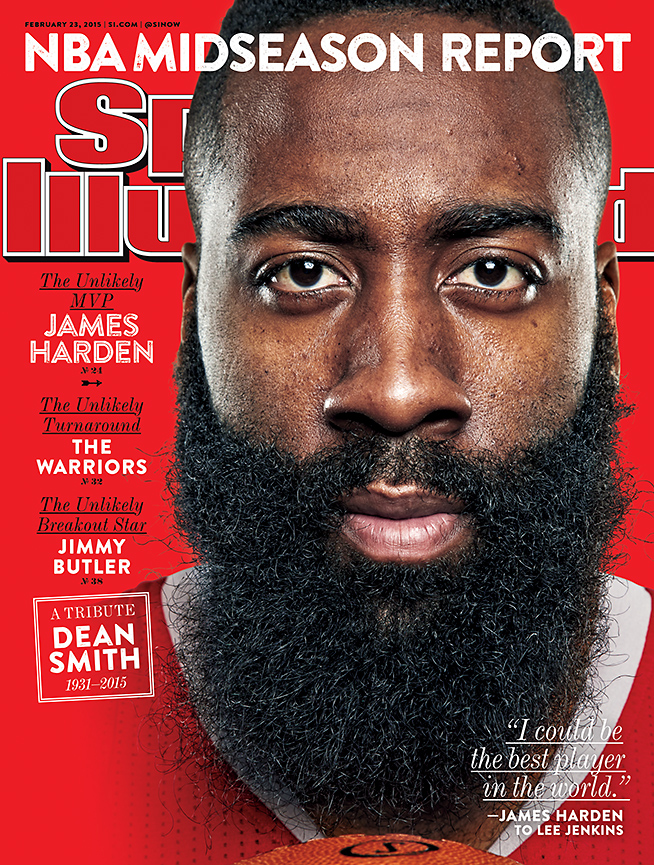 Then another call to a GCG Productions, a stage company I used previously on that fashion shoot to build another stage platform for the Plexiglas sheets. I keep all my emails so I just looked up the email from 7 years earlier and found my stage company buddy George. George is awesome – and luckily he was available. Done.

I booked Travis “cowboy truck” Scheibel and Michael “MacGyver” Klein as assistants. Two of the best in Houston, or anywhere for that matter. Done.

After all that scrambling to get ready in record time, the weather took a turn for the worse, and the shoot was moved to Saturday (on the Rockets suggestion, no less!). Actually, it was a good thing….I knew that our first window on Thursday would be cloudy and our chances were looking much better for good weather on Saturday. The shot wouldn’t really work on a totally cloudy evening. We had to then rebook everyone for the Saturday evening shoot….fortunately the stars aligned, everyone was available, and the location was still ours.

Travis rigged up an ingenious method for transporting the large sheets of Plexi vertically in his truck between sections of heavy MDF board with lots of clamps and ropes to keep the Plexi from bending or getting bowed. I leave the rigging/knot-tying Eagle Scout stuff to Travis and Michael, since I never made it past my Webelo badge. 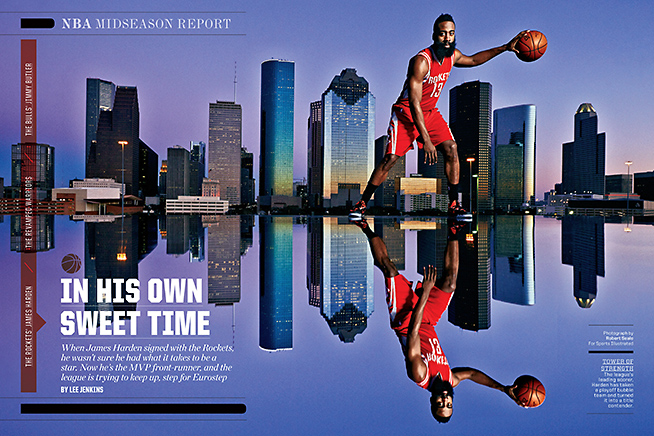 The James Harden spread as it appeared in SI.

We set up Saturday afternoon several hours before the shoot to test. You may be asking why we built a stage with plexiglas on it?  The simple reason is, parking garages, or most roof structures for that matter usually have a waist or chest high border around them, which destroys your look for a full length photo.  Building a stage solves the problem, and puts the subject up high enough to get rid of the unsightly “lip” around the edge of the building.  Why plexiglas?  Because the parking garage is white concrete, and it's ugly….that and I'm a sucker for reflection pictures….just ask Travis.  He jokes that if there is a 1′ x 1′ mud puddle on the ground somewhere, I'm usually laying next to it trying to shoot the reflection.  I'm a weirdo, I know.

We also set up a separate backdrop off to the side of the platform, just an 8 x 8 Scrim Jim to do some tight portraits of James as requested by the editor. The skyline would make a nice spread, and the tight portrait showcasing the beard would make a great cover (if we were lucky!).

It was super windy on the roof by the appointed shoot time, and I was fortunate that a couple of strong guys from George’s stage company agreed to help us out to steady ropes and function as human sandbags for us. Michael Klein, who literally has an entire grip truck in his Toyota SUV, dug around and came up with rigging for a wind break around our backdrop so:

B.) So our background and lighting gear wouldn’t get blown off the roof.

He also built us a super boom, which came in handy considering Harden is 6’5”, and he was over 4 feet in the air on the stage platform. Getting the lighting up high was critical.

About the lighting: on the Plexiglas shot, I used a Profoto B4 on a Plume Wafer 100 with a 30 degree grid. We could have gone with a bigger light modifier, but I wanted the light to fall off and not contaminate our plexi reflection with a giant hot spot. On the tight cover shot, we used all Profoto (one B4 and two 7B’s I think).  There was no power on the roof, but with all the battery powered Profoto units, we were ok. 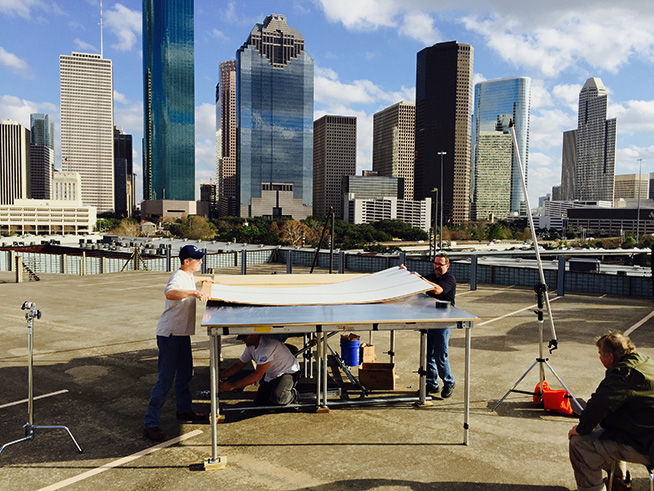 Our crew setting up the plexiglas stage on the rooftop parking garage.

Timing was critical – we only had 20 minutes with Harden to get both shots, and predicting the cool after sunset glow on buildings is not an exact science.  I figured it was ideal somewhere between 6:12 and 6:23pm.  If Harden arrived early, we would start with the tight headshot portrait, and if he was late we would reverse the setups.

We had an audience for the shoot, including Harden’s bodyguard, his nephew and mom (who’s a fun lady!), my wife, who was shooting some BTS video for us, the Rockets media relations director, and finally, James himself.  He was a little early, so we got the plain backdrop out of the way first, and then moved on to the plexi platform.

After watching cloud cover all day, we were lucky and the clouds parted just an hour before sunset for a fabulous magenta purple afterglow. The magazine repro’d a bit on the blue side, but that’s printing. SI Art Director Chris Hercik did us proud again with a nice classy layout for the cover and spread.

After Harden left, the crew had fun taking turns taking photos on the stage.

Now, if I can just find Billy Gibbons’ phone number for the next time…..hmmmmm. 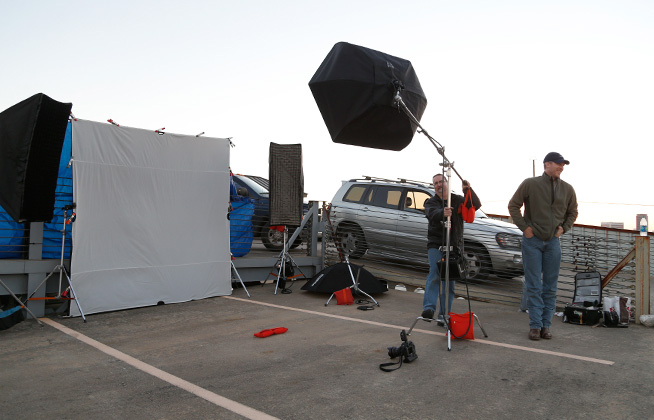 Here's the simple Scrimjim backdrop with windbreak to keep it secure on the roof.