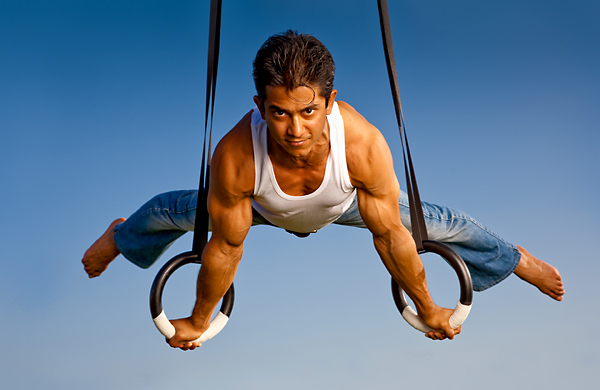 I had the opportunity to collaborate recently on some sports portrait photographs of Olympic gymnast Raj Bhavsar.  Raj was on the 2001 and 2003 U.S. World Champion gymnastics team, and was a bronze medalist on the 2008 U.S. Olympic Team in Beijing.

After a weather delay derailed our first shoot, we regrouped a week later and had a wonderful day with clear skies for our rescheduled shoot.  One of the chief concerns was finding a suitable location for the shoot.  Raj's gym was a typical fluorescent lit nightmare for photography.  I knew that we could get cleaner and more dramatic photos outdoor somewhere, but Raj is a badass in the rings event…..where do you hang his rings outside, so that you can still get a sky/clean background behind him? 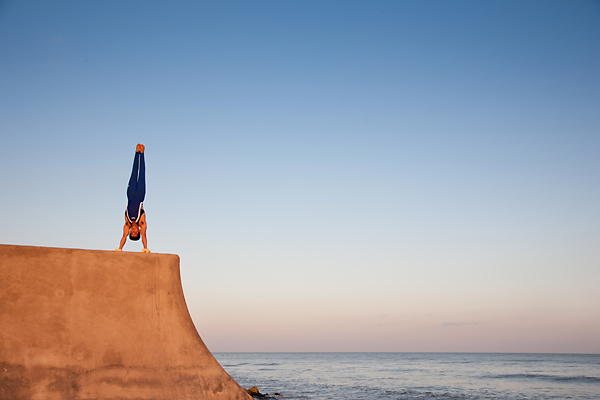 Raj at the edge of the Galveston seawall: sometimes you lose the strobes and go with what God gave you...

After thinking for a few days, it hit me…..why not hang them from the goalpost of a football field?  This is Texas, so football fields are everywhere and easily accessible.  We wanted a location that might give us several different options, both with the rings and without, so we finally decided on Galveston Island.  I used Google Earth to scout football fields, and to look at the directional layouts of various fields.  Google Earth rules, and has become an invaluable scouting tool for us.

We began the shoot at Galveston Ball High School (we got permission from the school district first), and used a ladder to rig Raj's ring setup to the crossbar of the goalpost.  We decided to do this shoot with Raj dressed in jeans, and we did some shots with and without his shirt on to showcase his highly developed upper body.

After breaking down the ring setup, and after an interview and quick costume change we took Raj down to the Galveston seawall, and photographed him there.  The evening light was beautiful and warm, so we went with natural light on this series.  For sunset, we traveled to the end of the seawall and photographed him holding an amazing pose as the sun went down.  The sunset shots were lit simply, with a Plume Wafer Hexoval 180 held by assistant Nathan Lindstrom over very uneven rocks in high winds.  Raj was really interested in photography, so he made a fabulous subject.  I can't wait to work with him again soon. 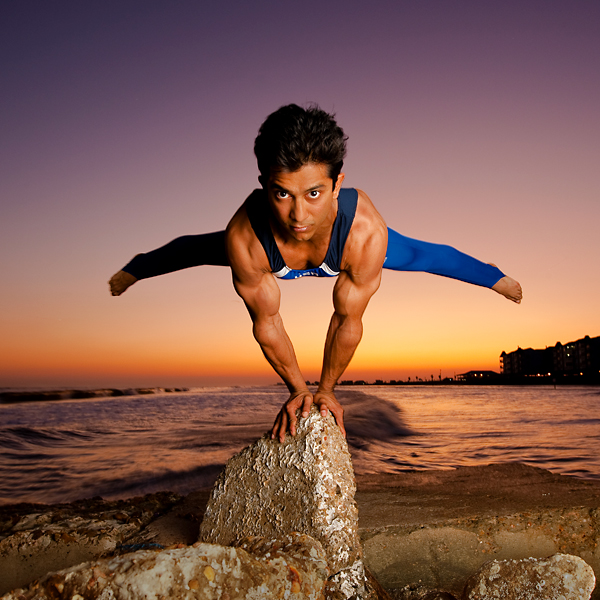 Raj holding an unbelievable pose, lit with a Hexoval 180