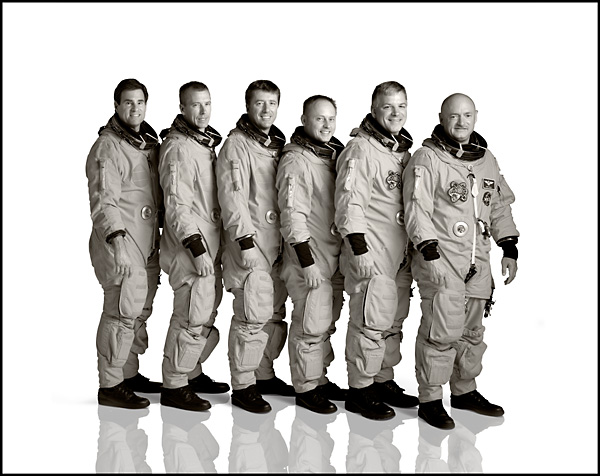 Cmdr. Mark Kelly and the rest of the STS-134 crew

If you ever want to feel bad about yourself and what you've accomplished in life, sit down for an afternoon and read astronaut bios.  They represent the best of  Type-A overachievers.  They are an incredibly exclusive group – you have much better odds of being hit by lightning, winning the lottery, or becoming a rock star than orbiting Earth in space.

Last summer, I had the rare opportunity to photograph a group of astronauts who had all been major players in the Space Shuttle program for a magazine that I've always wanted to work for:  Air & Space.  I had a fabulous editor who was one of the most supportive and collaborative professionals with whom I've ever worked.

The working title of the piece was “Shuttlenauts”, and I was able to photograph many of the key people who shaped the program.

You might be asking:  “Gee, dude – why aren't these portraits environmental, with launch pads, shuttles, mission control, underwater training tanks, etc. in the backgrounds?”  That would have been fun to do, but these current and former astronauts were assembled in one room (in various groupings) for two, 1-hour sessions, on separate days, several weeks apart.  Some have since retired or joined the private sector, and some have taken management positions within NASA…..hence, not everyone would be in cool orange ACES high altitude pressure suit – in fact, many of them were going to be in street clothes.  When working in a situation like this, with limited time, and lots of different outfits, I feel it's best to simplify and unify the essay with a common background technique. 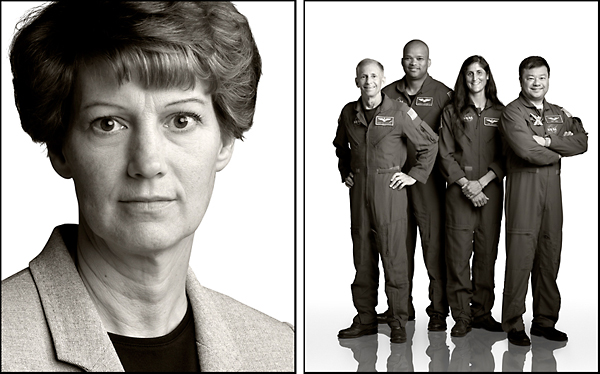 There's a great Richard Avedon quote about simplification: ” I have a white background.  I have the person I'm interested in, and the thing that happens between us.”

Since we were photographing everyone on a standard backdrop, and some of the shots were large groups, I used something I like to call “corner lighting.”   I'll write more about this in a future post, but it's basically a way to light large groups, or open up shadows on an individual portrait while still retaining some direction and shape.  I think it works well, and is much more pleasing to the eye than standard “butterfly” lighting schemes or (God-forbid)…. ringlfash.

Although these pictures originally ran in color in the magazine, I've really decided I quite like them in black and white.  The originals were captured as raw files with Canon EOS1Ds Mk III  cameras.  I did the black and white conversions in Adobe Photoshop CS5  from  16-bit TIFF files exported from Lightroom.  Using Photoshop CS5's “Black and White” adjustment tool.  I set the reds at 60, yellows at 90, with the hue adjustment at 39, and the saturation at 4 to add a little warmth to the tones.  I left the other colors untouched.

I've photographed sports stars and other celebrities, and I'm rarely starstruck, but I was just absolutely blown away to be in the same room with these people.  As a kid, I really wanted to be a fighter pilot (who didn't?), and many of the astronauts began their careers as Navy or Air Force pilots, and eventually many of them were  top test pilots before joining the astronaut corps.  These are my kind of people!  (Blog sidebar: So, I gave up on the whole Air Force fighter pilot thing when I had to get glasses for my then 20/400 vision in 8th grade….so what career did the legally blind guy choose?….what else?  A photographer.  Hmmm.) 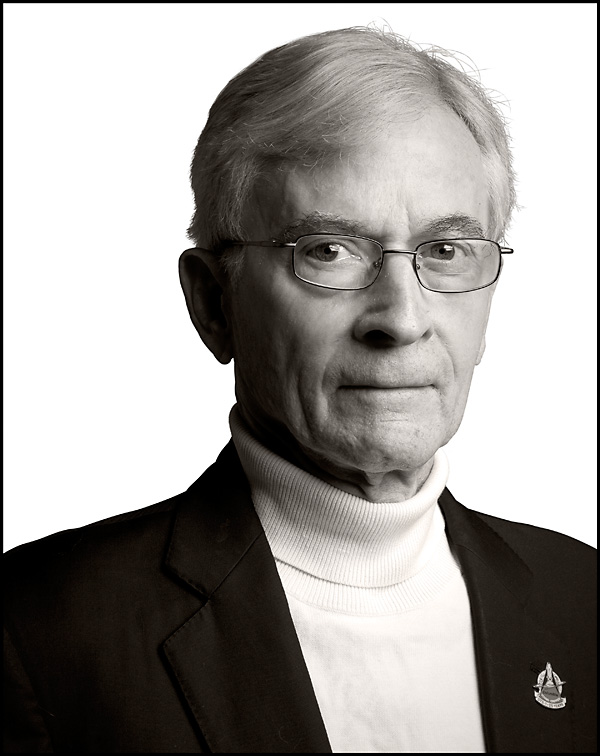 As for the actual shoot, we photographed some of them individually and some in small groups according to various themes as follows:

– the entire STS-134 crew, including Commander Mark Kelly (which at the time was slated to be the last shuttle mission.)

–John Young: Young is a total badass.  He's perhaps the most famous and accomplished astronaut.  He's a  former Navy fighter pilot and test pilot.   He's been in space on 6 missions in 3 different eras of the US space program.   He served as the commander of the first shuttle mission, and also STS-9, Gemini 3, Gemini 10, Apollo 10, and Apollo 16 (yes, he not only walked on the moon, but he also drove the lunar rover on the surface).  Young was also Chief of the Astronaut office, and served on several backup crews, including Apollo 13.  He is 80 years old, and reportedly still attends weekly briefings at NASA.

–Robert Crippen: Crippen is the astronaut most identified with the Shuttle era: he flew with Young on STS-1, and later served as commander of STS-7, STS-41C, and STS-41G; he also ran Kennedy Space Center, and was Director of the Shuttle program for NASA)

–Eileen Collins: Collins was the first female Shuttle commander (on STS-93), and also flew on STS-63, STS-84, and STS-114, when she was the commander of the first “Return to flight” mission after the Columbia accident)

-“High Timers” :  Three of the astronauts who have spent the most total time in space: Peggy Whitson: Now head of the astronaut office, Whitson has spent over 376 days in space during two stays on the ISS;  Michael Lopez-Alegria: The spacewalk king.  A veteran of three missions, he holds the record for EVA's (10), and total EVA time (over 67 hours); Franklin Chang-Diaz, a veteran of seven shuttle missions.

– “Station Builders”:  Astronauts who played a major part in building the International Space Station (ISS):  Robert Curbeam, Suni Williams, Ken Cockrell, and Leroy Chiao.  These guys were a great group and lots of fun.  (I learned from them that former Navy pilots who are astronauts (Cockrell, Williams, Curbeam) wear brown boots with their NASA flight suits, vs. the standard black boots….It's a Naval aviator thing.)

-Mae Jemison and Anna Fisher: both were MD's as well as pioneering female astronauts 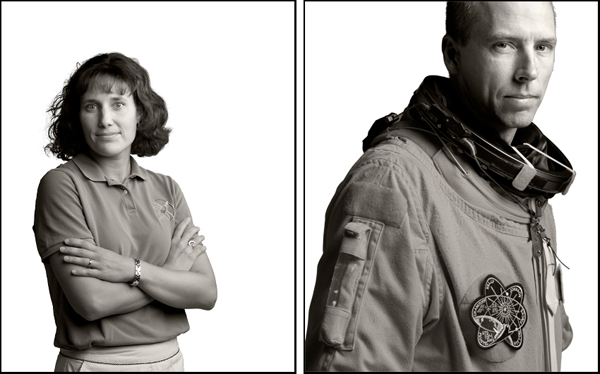 There were of course some key people involved in the program that we did not have the opportunity to photograph, due to scheduling problems, but I'm hoping to continue photographing other astronauts and adding to this collection over the next couple of years.

I don't often have my picture made with the people I photograph.  It  seems a little weird to ask, I'm shy, and it's just sort of strange.  I have photos of me with James Brown and Spike Lee, and that's about it.  Near the end of the shoot, while shooting a group shot of the female astronauts, they playfully started kicking up their heels “chorus line” style.  Once we stopped laughing,  (there was lots of laughing) they insisted I join them.  How could I refuse?  It was a blast and made for an awesome behind the scenes souvenir photo. 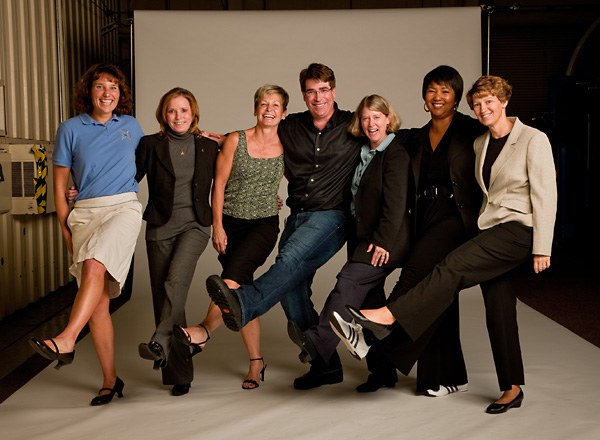 Easily the highest IQ chorus line ever assembled (even with me handicapping the group).

You can see more of the astronaut portraits on the regular website of Houston photographer Robert Seale.