Farewell to the Captain: Covering Derek Jeter through the years

Derek Jeter’s first full season in the majors coincided with my first year at The Sporting News: we both started in earnest at our respective jobs in April of 1996. He was 22-year-old rookie, and I was a fledgling 26-year-old sports photographer.

I covered him in various Yankees games throughout the years, including Six of his World Series appearances, and photographed portraits of him several times for various stories and covers. He was always a humble, quiet, gentleman – a real class act. On the day of his last MLB game, I thought I would share some photos and memories of Mr. November.

I first photographed Derek during game action of the 1996 Yankees season. I don’t remember much about him from that year, other than  having my lens trained on him for hours, trying to get that elusive shortstop levitation picture. That 1996 World Series was my initiation into Yankee Stadium “Bleacher Creature” culture. As the young guy at TSN, I was relegated to shooting most of the series from a camera platform over the right field wall. The cool part, was I shot next to my late friend, legendary SI baseball photographer V. J. Lovero. I remember him being unfazed, even giddy as the Creatures conducted “Roll Call.” For the uninitiated, Roll Call, is a series of chants by the Bleacher Creatures of each players name – (“DEH—RIK —JEEEE—TER!!!), which continues unabated until the player being called tips his cap or otherwise acknowledges the fans, at which point they go nuts, and then move on to the next player. Once that is done, they revert to pelting photographers with beer and open mustard packets.

In 1997, I made portraits of him during the off season at Legends Field in Tampa, which resulted in a cover later on. I was still shooting 35mm then, and he was patient with me as I ran him from station to station, trying to get some different looks out of him. 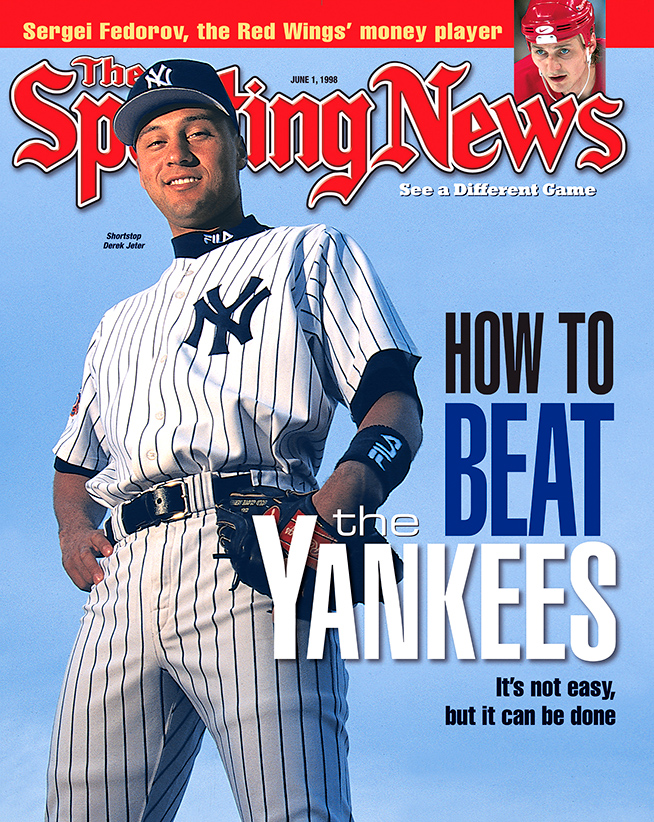 An early Jeter cover from a 1997 photo session in Tampa.

In 1999, we had a project where TSN named an “All-throwback Team.” Guys that were old-school, who played the game “the right way” were photographed in black and white in  old uniforms in vintage, Charles Conlon style stiff poses for a photo essay that would be published just before Spring Training.

The tough part wasn’t shooting the photos. It was finding old gloves, uniforms, shoes, etc with no production budget, and then scheduling all of these during January and February before Spring Training started. I was lucky in that the owners of Mitchell and Ness, and Ebbetts Field Flannels, makers of old authentic jerseys, really embraced the project and let us borrow their cool jerseys. One of our issues was finding pants, believe it or not. Nobody had old school baggy baseball pants. I scoured the country looking for them but had zero luck. I didn’t want to create an entire photo story with waist-up portraits of every player. I thought that would be boring. Peter Capolino, the owner of Mitchell and Ness, dug around in his basement and found me a pair of pinstriped pants that we thought would fit Jeter. The problem? One leg was pinstriped in blue, and the other side was pinstriped in RED!

My memory is fuzzy, but he said something about them being made for an old timers event for someone who split their career between two teams…..(for some reason, I’m thinking Tug McGraw -Mets/Phillies – which would make sense since M&N was in Philly), but I can’t remember for sure. In any event, there I was back at Legends Field (which has a nice overhang roof reminiscent of the old MLB stadiums), trying to convince Derek Jeter that he’s not going to look like an idiot in half red/half blue pinstriped pants.

“No, really, dude…we’re only going to run these in B&W….nobody will ever know….really, trust me, come on….”

He was dubious, but he played along anyway, and we made some portraits of him in his “authentic” 1930’s era Yankee uniform. I wanted to shoot type 55 Polaroid, but my boss insisted I shoot color on the photos and have our backshop convert them, so here’s the evidence of Jeter in those goofy pants. Sorry Derek! 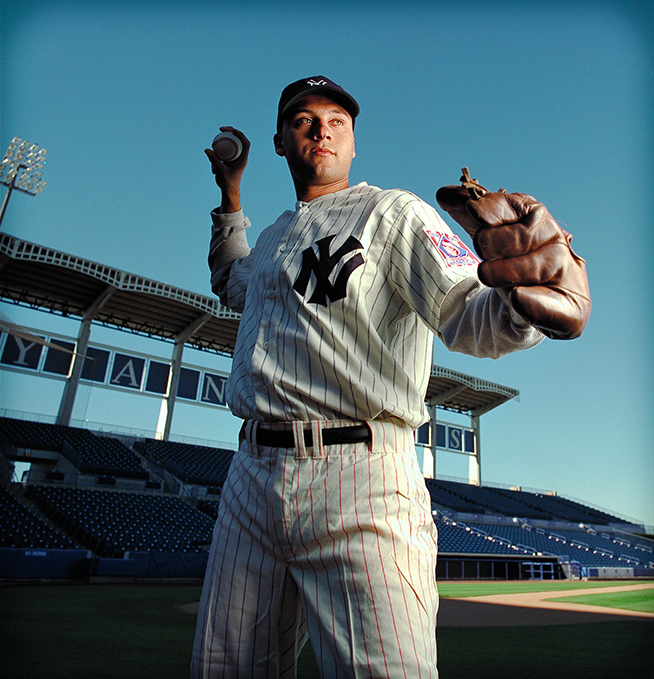 Rare color scan of the Derek Jeter “throwback uniform” shoot from 1999. Note the goofy pants with red and blue pinstripes. 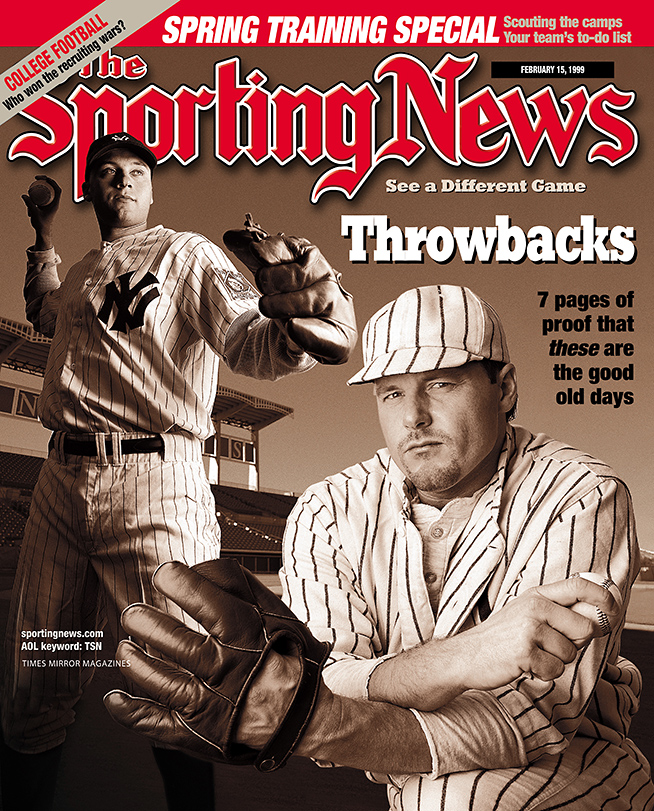 The “Throwbacks” Sporting News cover as it appeared. Jeter is shown in a composite with Roger Clemens, who was wearing the uniform he wore in movie “Cobb.”

During Game 4 of the 2001 World Series, I was working the New York games with my colleagues, Albert Dickson and John Dunn, and I was still hurting from the night before. Game 3 was the game where President Bush threw out the first pitch, and it was only a few weeks after 9/11. It was a fantastic moment. Unfortunately, because we had to be in our photo positions 3 hours before game time, because of security concerns, I took a screaming Tony Womack line drive to my jaw during BP. My head was ringing and my ligaments in my face were so stretched that my jaws/teeth didn’t line up correctly for a month. I would have gone to a hospital, except that the hospitals were experiencing a scare over anthrax!

So, it’s now Game 4, and on this particular night I was on the 3rd base side…waaaaaay outside – almost in left field. My head still hurt, but despite that and my remote position, there were distractions to keep us busy in the early innings. Just after the game started, the Yankees escorted Spike Lee into our photo well very close to us. I don’t know if they actually sold seats in the photo wells, or if they were just trying to accommodate VIPs, but a few minutes later I was shoved forward as Pete Sampras and his wife Bridgette Wilson (who’s really stunning by the way…), were also seated in the well next to us. A few innings later, I was bumped and shoved forward again as Flavor Flav came by to say hi to Spike (his seats weren’t as good). 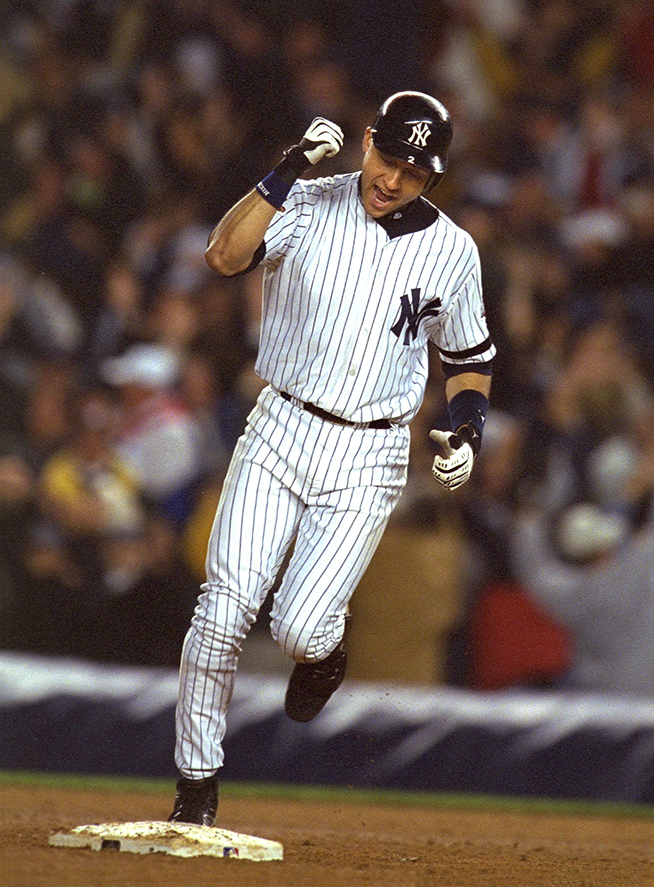 Derek Jeter rounds second after his 10th inning walk-off homer in Game 4 of the 2001 World Series.

After Tino Martinez tied the game with a two run homer in the 9th, the clock soon struck midnight. The Yankees flashed a sign on the scoreboard that said “Welcome to November Baseball.” I was really tired, and remarked to the photographer next to me that I really wished I had the other half of that pastrami sandwich from lunch at the Stage Deli. Jeter came up to bat in the tenth, and on a 3-2 count, blasted the game winning walk off homer, earning him the nickname “Mr. November.”   The fans stayed in the stadium cheering, and singing “New York, New York” until the wee hours. I was ready to go, and found my colleague from MLB, baseball photographer extraordinaire Brad Mangin just standing there with a big grin on his face, taking in the scene. Maybe it was because of my aching head, or maybe it was because I was tired and hungry, but I was ready to head in. Brad stopped me….”Dude, this is one of the best World Series games ever played!” I stopped, took a few more pictures, and hung out with Brad on the field for a few minutes watching the fans, and it is still one of my favorite World Series memories. 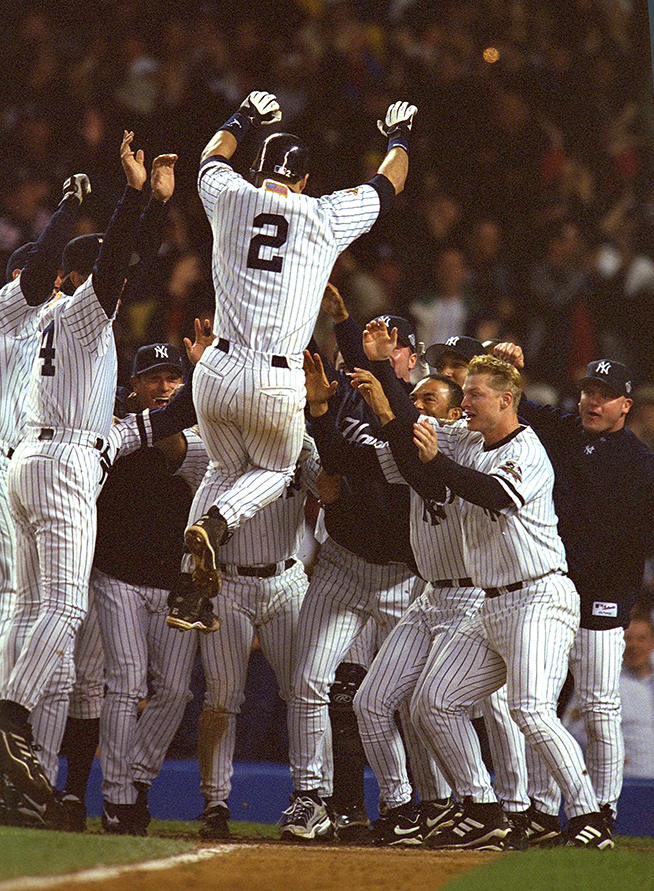 Derek Jeter jumps into the arms of his teammates after Game 4 of the 2001 World Series.

In 2002, Jeter was named the cover of the Sporting News “Good Guys” issue. For several years, we did a special issue featuring players who made outstanding community or charity contributions, hence the name. This was about players who were the antithesis of the thug millionaires many had come to associate with professional sports stars….David Robinson had been our “Good Guy” the previous year I think.

I was in New Jersey for the NBA Finals against the Lakers with my colleague Bob Leverone. We were dispatched to Pier 60 after Game 4 to shoot Jeter with his family for the GG issue. For this feature, we photographed the players in street clothes, not their uniform, and Derek showed up in a beautiful custom suit. As I began to shoot, I noticed he was wearing a Platinum Rolex President with a diamond bezel. It was a really nice watch, and not nearly as crazy or blingy as some others I’ve seen, but I thought it would be too distracting on the cover.  I also thought that it might send the wrong message on a cover highlighting his foundation’s good works. I asked to adjust his wardrobe for a sec, and I gently pulled the cuff down over the watch. He looked at me like I was nuts, and I don’t think he knew why I was doing it, (I said something about making the suit look straight), but I felt like it was the right thing to do at the time. His parents and sister were there as well, and we made a nice portrait of them together. They were all lovely people. 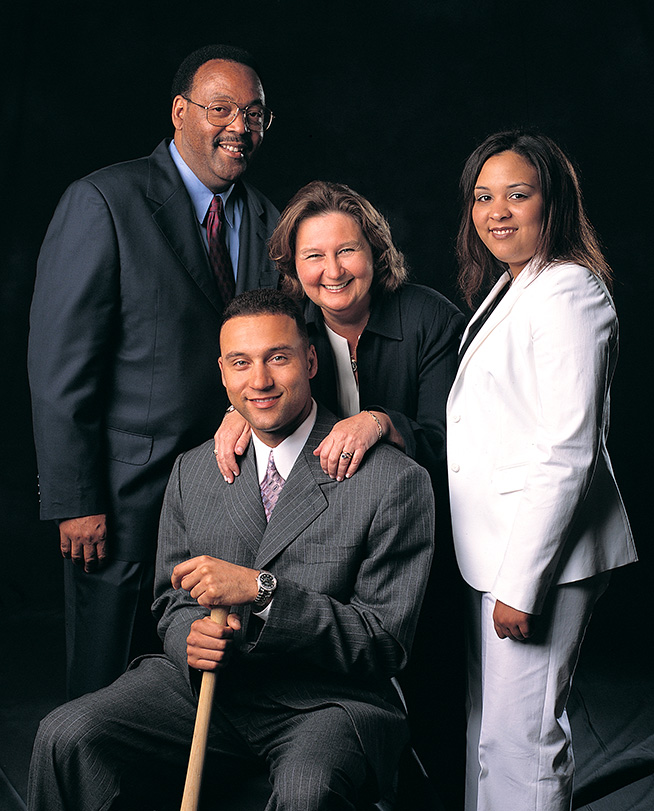 Derek Jeter with his parents and sister, from our “Good Guys” shoot at Pier 60 in New York in 2002. 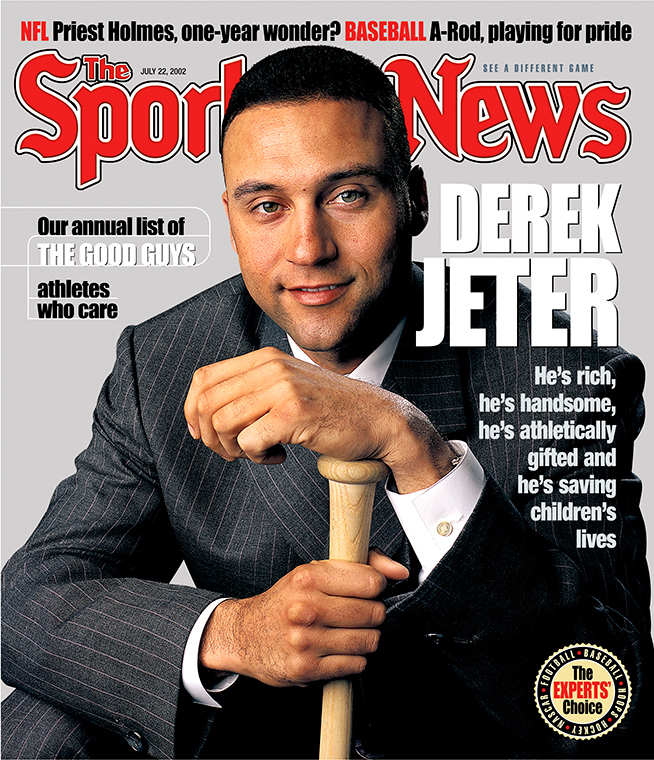 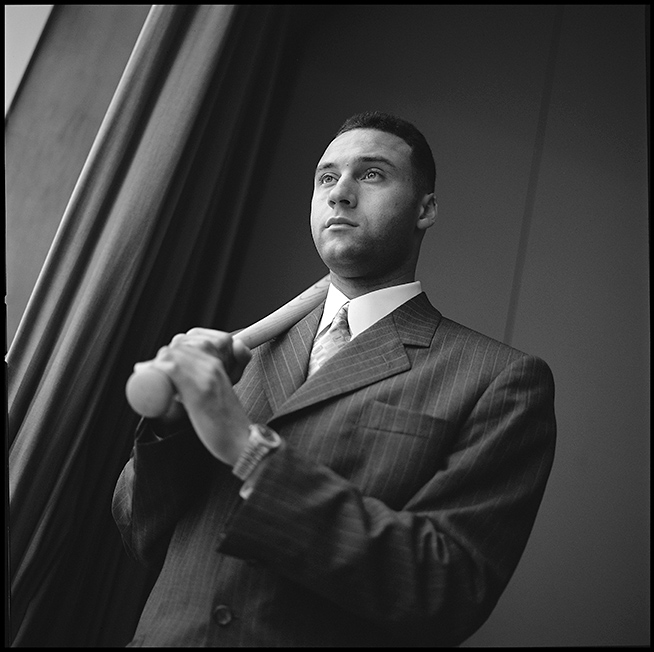 One of my favorite portraits of Jeter – taken with simple window light during 2002.

In 2004, Alex Rodriguez joined the Yankees and although everyone was abuzz about Arod, we also requested some shots of Jeter and Arod together at the shoot. I’m not sure when their relationship supposedly cooled, but Jeter was just as solid as ever, showing up on time with a good attitude. One of the shots of them together made the cover a few weeks later. 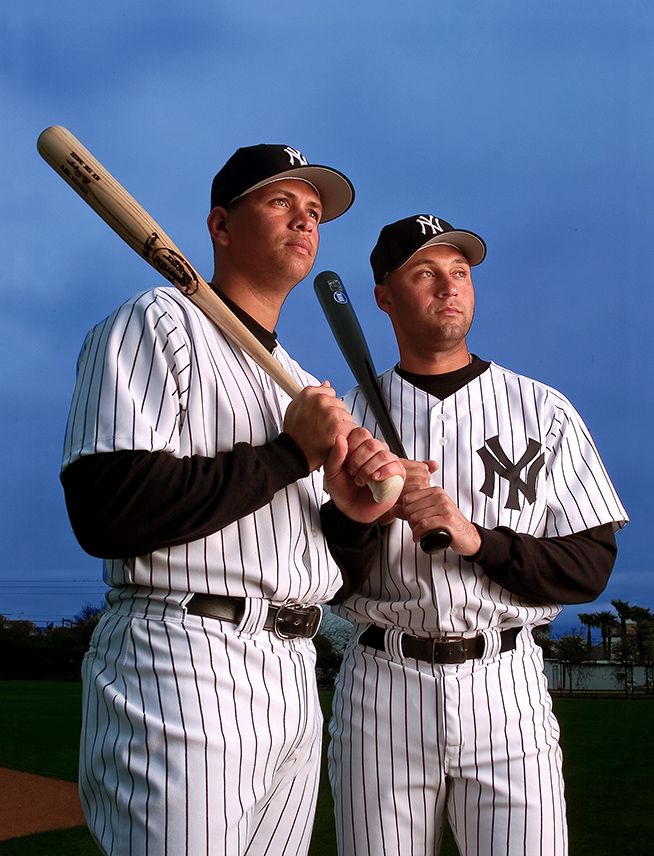 Arod and Jeter together during Spring Training, 2004. 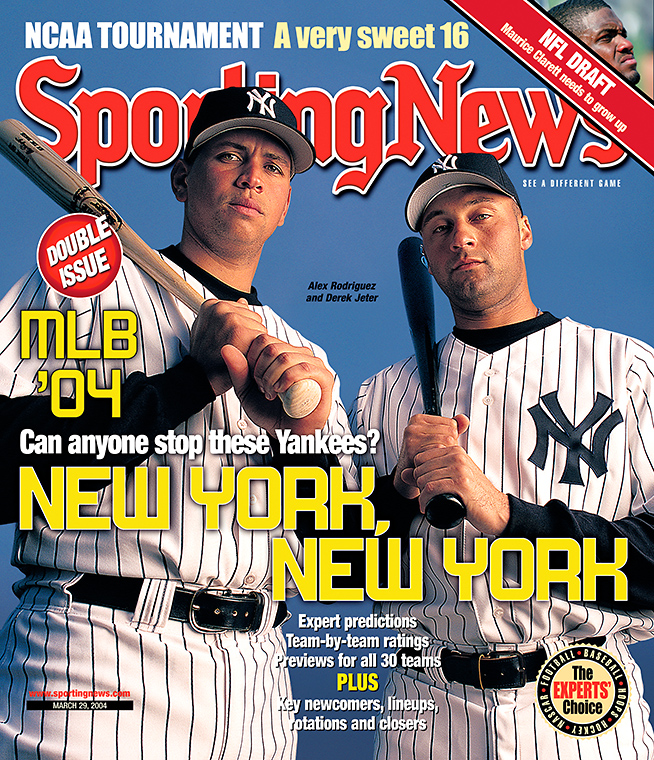 I left the Sporting News in Dec 2006 to work on my own, but I’ve been lucky to cover Jeter a couple of more times since then. I really would love to have seen that final single he swatted a couple of nights ago during his final home game. Hopefully I’ll get to make another portrait of him at some point.

Until then, Captain….it was always a pleasure. 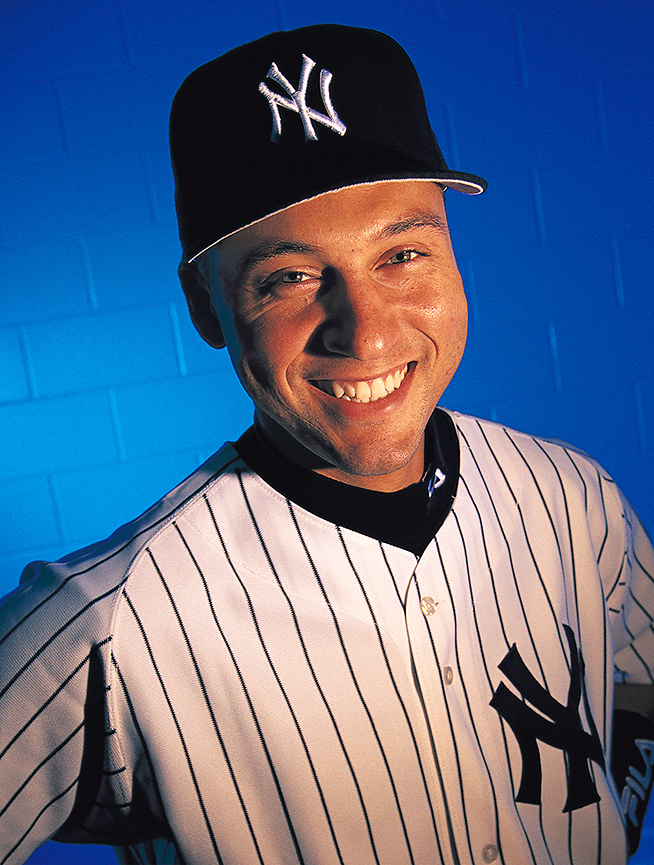 A happy Jeter probably laughing at something stupid I said during a 1997 photo shoot in the Yankees Florida clubhouse.