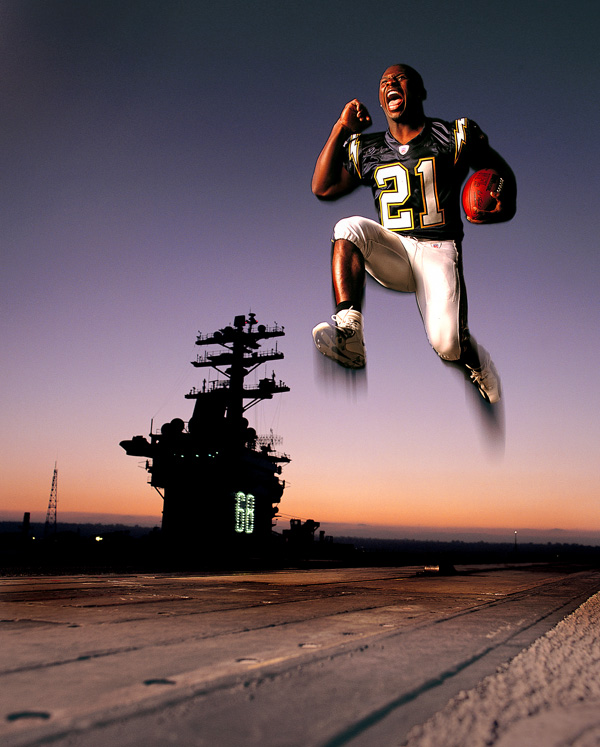 The final photo that was used on the cover.

I get a lot of questions and comments about the shoot with LaDainian Tomlinson from a couple of years ago, so now seems like as good a time as any to revisit that photograph, and talk about the shoot.

I was in San Diego, scouting locations for a cover shoot for the Sporting News. Each year, the magazine publishes their “Top 100” issue, ranking the 100 best players in the NFL. This particular year, San Diego Chargers running back LaDainian Tomlinson was tops in the whole country, so we needed a great, dynamic portrait and inside spread that would convey his athletic prowess, and also give a little local flavor/context to the photo.

I spent some time looking at various locations around Coronado Island……beaches, sand, palm trees, etc….and with the right time of day, any of those elements might have made a usable background for a photo like this. I was trying to think of something better, and I’ve always been a military buff, so my eye kept going back to the Navy ships in the harbor. San Diego is a big Navy town, and there were several big ships, including a couple of aircraft carriers parked in the harbor.  This was post 9/11, so I figured the chances of getting a location on one of those great Navy ships would be impossible without a blood sample and 6 months of government paperwork, but I mentioned it anyway while chatting with a good friend of mine, who worked at the Padres. Amazingly enough, my friend hooked me up with a retired high-ranking Navy officer who happened to work a lot with the Padres…..this was the guy who arranged for all sorts of outrageous things on behalf of the club: Blue Angels flyovers, Navy color guards, ship visits, etc. In about an hour, he called me back with “You have a venue on the USS Nimitz tomorrow at 1500.” 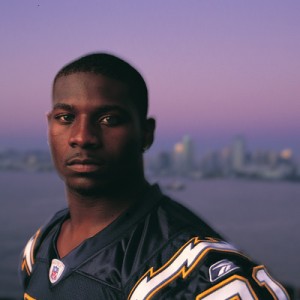 Tight portrait of LT with San Diego in the background

Now, all I had to do was convince the Chargers that this was a good idea.

After several phone calls, a lot of schmoozing, and descriptive selling….”Just think of the headline on the cover….”Top Gun!”, and promising to send a limo for LaDainian to pick him up, we finally got a commitment about four hours later from LT and the Chargers.

Now, I absolutely had to pull this off.

I lined up a limo service, and secured directions to LaDainian’s house, leaving careful instructions, to load up the back of the limo with his favorite beverages, and securing the uniform and pads from the team.
My assistant on the shoot, Shawn Cullen (a stellar, former SI assistant who has worked with great San Diego photographers like Andy Hayt, Tim Tadder, Tim Mantoani), and I arrived at the naval base that afternoon for security screening, which was very similar to an airport. After they checked out all of our equipment, we headed towards the carrier, where I assumed the large aircraft elevator would promptly whisk us up to the top deck.

Wrong!  Most of the crew was on shore leave, and the key people who could operate the elevator were not there. I guess we’ll be taking the stairs.

Shawn is a strong, strapping young dude….but lugging each Lightware case up an M.C. Escher maze of ladders and hatches up I don’t know how many levels of stairs was excruciating for both of us. There were more stairs leading to that deck than to the top of the Empire State Building! We were so worn out, we figured we would just throw the gear over the side after the shoot….or launch it off the catapult into the harbor.
Strangely enough, once on deck, with help from the crew, we found power outlets all over the place, and we didn’t have to use any of our battery packs. We ran power cables and began setting up lighting.
We found a great spot where we could see the bridge…and framed it up with the impending sunset. LaDainian’s car was on the way…we shot some tests and anxiously awaited his arrival, along with staff from the Chargers.

Sending a car for an athlete or other celebrity is always a good idea on a location shoot. 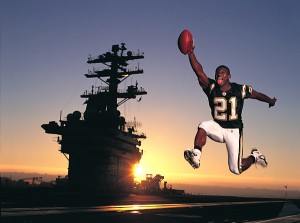 LT during one of the earlier shots, prior to sunset

Relying on the subject to find the location and get there on time (especially with something critical like a sunset) is never a good idea. Having a car and driver go to retrieve the talent allows the photo crew to set up on set well ahead of time, prepare and test the shoot, and be ready to go at the appointed time.

We were tested and ready when LaDainian arrived…..he was into the idea, and actually brought his wife with him as well. As always, I began with some pretty straightforward portraits before trying the more athletic poses that we eventually ended up with.

He was actually a bit early, and we also had some built in time in case there was a problem getting him there, so it now became critical to stall a bit. We knew the sunset would be beautiful during the magic hour, and it was just a matter of keeping him there, and keeping him interested long enough to finish the shoot in the optimum light of the day.

We moved on, after the straightforward stuff to some athletic poses, including some leaping and jumping. No trampoline here, just LaDainian’s insane vertical leap. Putting the camera all the way down on the deck gave us an extremely low angle, which accentuates the feeling that he’s high in the sky. 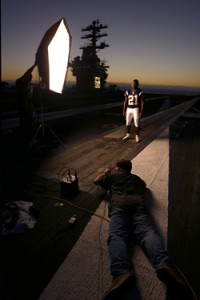 Shooting on board the USS Nimitz

We shot another series of tight pictures….faces, with San Diego shoreline in the background to pass the time…..stalling his departure until about 20 more minutes until the light was a classic ROYGBIV spectrum sunset.
People have asked me about whetether we used rear-sync on these. Actually, we were using Dyna-Lite studio strobes with a Hasselblad at the time…..so there was no rear sync. I have found, over time….while shooting with slow-sync speed exposures with strobe, that if you have people leap into the air, and if you fire the exposure (and strobe) right at the apex of the leap, that the blur falls below the subject…making it appear that it is a rear-sync picture. It is sort of like panning backwards…it gives you the same look as a rear-sync, but you can precisely control the moment that you want strobed. Personally, I think rear-sync, unless the exposure is very short, leaves too much to chance.
We bracketed the shutter speeds to get different looks from the sky, but the final pick was shot on a Hasseleblad 40mm lens, at around ¼ second at F11.

This turned out to be one of my favorite photographs, incorporating many elements that I like: beautiful twilight sunset background, nice big soft light on the subject, an athletic action pose, and a strange location with conceptual context) into one photo.

In the end, as much as we wanted to, we didn’t launch the gear off the deck……but we thought long and hard about it when we had to face all those stairs again.