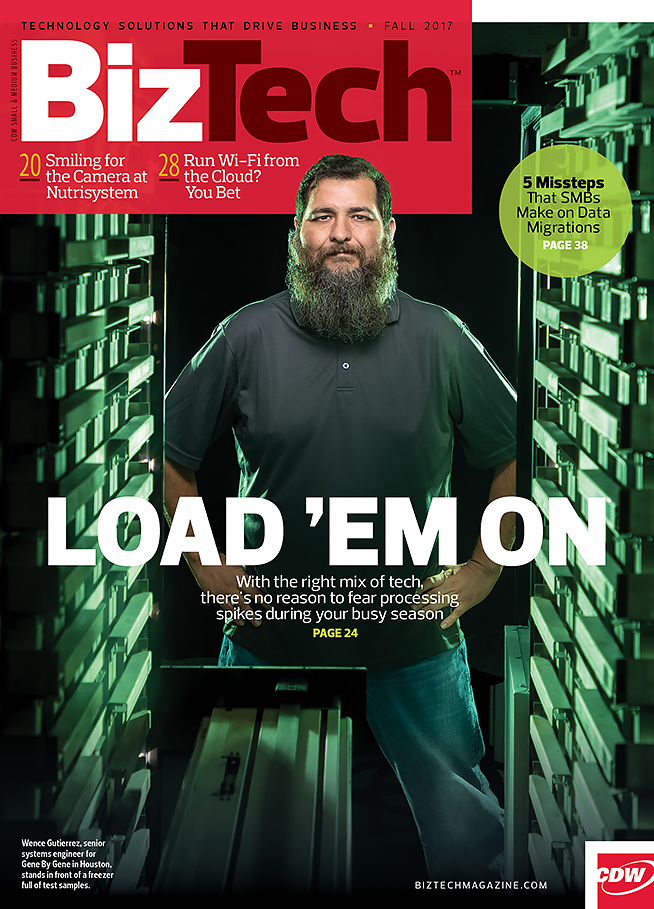 A recent cover of BizTech from a DNA testing lab.

Like most commercial photographers, we do a lot of work that is not necessarily viewable by the general public.  Even though the work might be viewed by thousands of people, it's not something you might see on a billboard or on the magazine rack at Barnes and Noble.  This B2B corporate photography work can take many forms: a multimedia presentation within a corporation, an annual report to a corporation's shareholders, a sales brochure, or in some cases a specifically targeted magazine with a carefully chosen audience.  These are called “trade magazines” in the photography business, and they often lead to fun and interesting assignments.

CDW has been producing a group of these magazines for quite some time, and I've been fortunate to shoot for them quite a bit.  Their technology solutions business is targeted to education, business, government, and healthcare customers, so they have a magazine for each industry titled (logically enough) EdTech, BizTech, StateTech, and HealthTech.

Over the years, I've been able to create cool environmental portraits of doctors, cops, and business executives.  I wanted to share a couple of covers from some recent issues of the magazines.

For BizTech, we photographed a high tech DNA testing facility.  The place was just as you would expect, a slightly mundane lab with lots of test tube vials being sorted by techs in lab coats, but with few good photo opportunities, as most of the techs were working at tables facing a wall.   Ugh!  I became fascinated by a large machine on one end of the lab…..it was a big blocky thing, but had a window looking through to either side.  Inside were vials in banks on both sides, and in the center was a little robot arm, doing it's thing – retrieving vials according to an automated program and moving them to be tested.  I decided it would make a cool photo if we could get some light inside, but it proved fairly difficult.  We ended up placing the subject on one side of the machine, booming a small strip bank above the machine, and then cross lighting the vials from each side in VERY tight quarters (with a slight green gel added), which also outlined the subject from behind.  It was really tricky, since I was shooting through a window on the other side and trying to avoid window fog and condensation on the glass.

For the StateTech cover, we photographed local constable Alan Rosen for a story on body cameras.  (It just so happened that our PR guy for the job was a former colleague, the famous Houston Chronicle political writer and generally great guy Alan Bernstein!)  We picked an abandoned building with lots of character not far from my studio in downtown Houston and shot several setups with Rosen and a group of his deputies all showcasing their new body cameras.  Most of the shots were horizontals and intended for an inside spread, but towards the end of the shoot, I remembered one of my old editor's mantras:  “No matter what you're doing, no matter what the assignment is, ALWAYS GET A HEADSHOT!”  That voice haunts me some days, but it's really good advice.  Your assignment might be to shoot a panoramic cityscape with an architect in the foreground, or an athlete in his home, or whatever – but remember that you'll be the designer's best friend if you give them a tight portrait they can run on page 3 or 4 of an article, or on a table of contents page, or in this case, if the story budget changes and your story ends up on the cover! 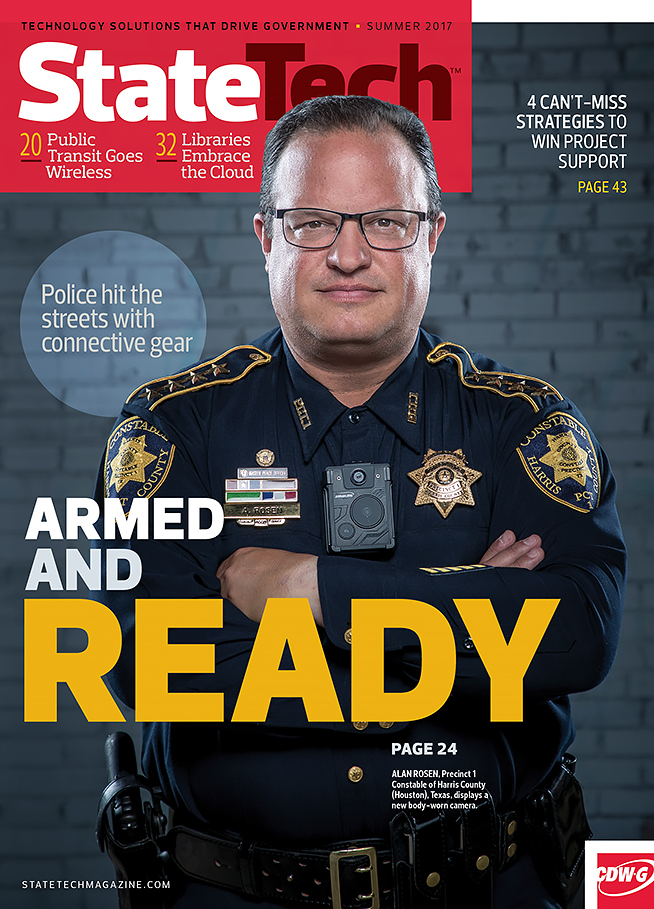 A recent cover of Constable Alan Rosen for StateTech.