I thought I would share a cool job I did for Under Armour a while back. Under Armour began as a small sports specialty clothing company based in Baltimore, Maryland. Legend has it that the founder, a Maryland football player named Kevin Plank, started the company after he was unsatisfied with the t-shirts and undergarments players wore under their football uniforms. His company was the first to develop the stretchy, moisture-wicking fabrics that are commonplace today. 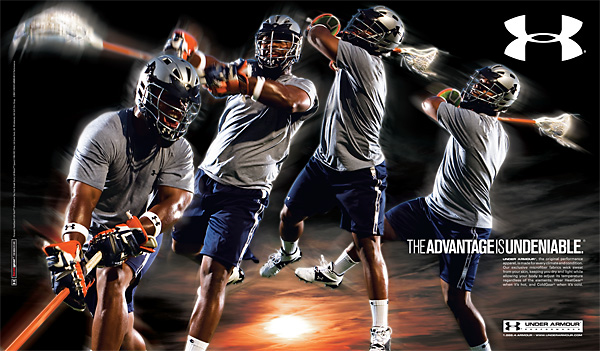 Anyway, Under Armour has grown into a gigantic company that makes all sorts of sports apparel and shoes. I was contacted by them to do an advertising shoot featuring their new line of products for lacrosse players.

We used real college lacrosse players as models, which was a huge help, since I’m a Texas guy. Football, basketball, baseball, track and field: no problem…..but I was not equipped to teach any models the finer points of lacrosse form.

Fortunately for all of us, the Art Director from Under Armour, Steve Grudzien,  did a great job of imagining the final ad. His idea was to shoot a sequence of a player in action, and then combine the individual shots into a composite. Since we were shooting in the daytime on a lacrosse field, we had to really crank the strobes to overpower the ambient light and create the backlit “Under Armour Lighting” that the brand is known for in all their advertising. 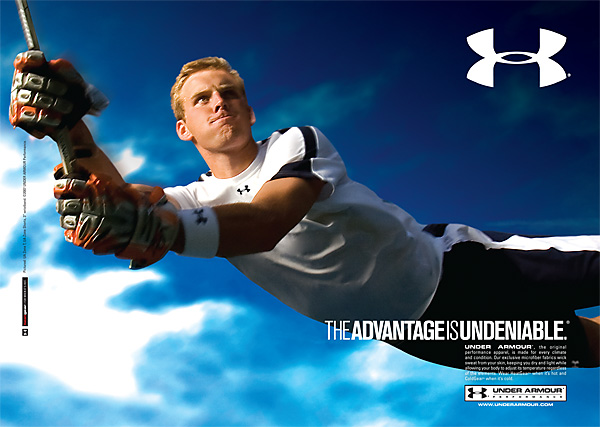 Steve did a great job of seamlessly combining 5 separate shots into the finished ad.

We had two great models to work with, so after nailing down the sequence shot, we set up mats on the field and staged some diving shots. We slowed the shutter a little on these to create a bit of motion blur around the player. Another Under Armour designer, Megan Bolster did a great job of designing the diving shot into another cool ad.