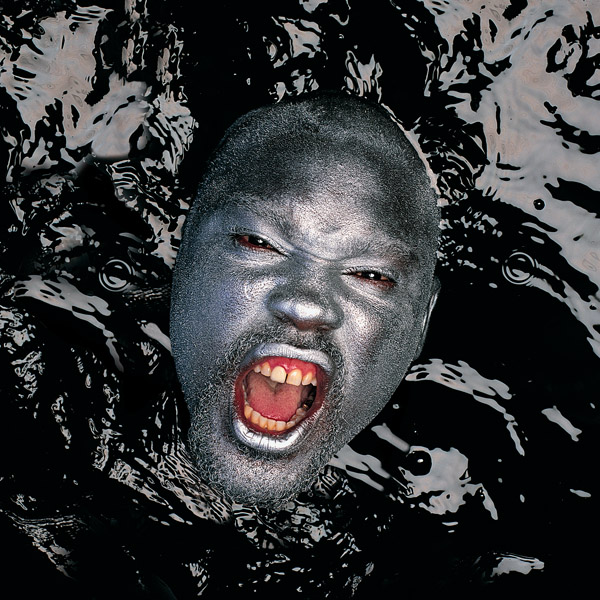 The final photo of Sapp in the pool

Sometimes you have an idea in your head, and even though you don’t know who you might eventually use it on, you know that one day, you'll eventually realize your vision and take that photograph.

For several years, I knew that I wanted to photograph someone, (ANYONE), their face painted with theatrical face paint, emerging from a pool of water, or just under the surface. I could picture this photograph in my head before I ever had a subject to photograph. Usually, my imagination wandered toward blue water and gold paint….maybe it would be a photograph of an Olympic swimmer or diver, who knows?…. but nevertheless, the vision stayed with me for quite some time.

When I received an assignment to photograph Warren Sapp, a big NFL football star, who had recently changed teams, I knew the time had arrived to float this harebrained scheme.  Sapp had just signed with the Oakland Raiders, whose crazed Raider-Nation fans dress up in other-worldly costumes, face paint, crazy masks, etc… and attend games in costume. He was known for having an outlandish personality matching his oversized frame. My thought was that he might be crazy enough to let me try the face paint on him, in a silver color matching the Raider Nation fans I had seen at so many Raiders games. I made some sketches of him in the crazy fan uniform and of the “face-emerging-from-water” photo that I had been thinking of for so long. 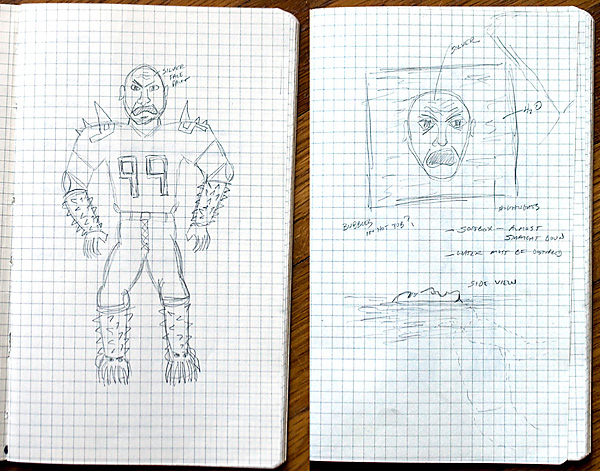 Sketches from my Moleskine notebook....try not to hate.

It was the off season, so there were not the usual practice time constraints, or teammates watching, and since we were doing the shot at his agent’s (Drew Rosenhaus) home in Miami, there would be no nervous team PR man there telling us we couldn’t do it. After setting up the shoot and making sure Drew had a pool (who doesn’t have a pool in South Beach, right?), I asked Drew’s marketing guy about my idea….black water, silver face paint….an abstract homage to the Raider fan. I’ll never forget his response….”Hell yeah! He’ll put all that spiky costume shit on for you too!”

I had a tight schedule with another shoot in Indianapolis, a half day at home, and then a shoot in Denver, with two days at home before the Sapp shoot in Miami. I used what little time I had to scurry all over town looking for props to create a true Raider Fan outfit…..I found latex shoulder pads and a skull belt and shoes via a Gene Simmons Halloween costume, ordered a Raiders jersey, which I ripped to shreds, and bought football pants and Umpire’s shin guards, to which we attached little silver painted skulls and spikes that we found at an art supply shop. I painted and touched up the Halloween costume, which was looking a little old. 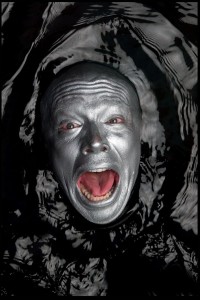 My fearless friend David in the pond

The next trick was to test my black water idea. I knew I wouldn’t have long with Warren, and I wanted to make sure everything was perfect before we tried such a crazy idea. I also thought it might help to show him the photo so he would know what we were going for. I knew that we needed a black pool, since a regular pool would have picked up a light blue tone from the water. I have a fairly large koi pond in the back yard, and I had recently bought one of those pre-formed black plastic water garden pools, to keep fish in while cleaning my main pond….I decided it would make a great test pool. I needed to find a test subject with a shaved head like Warren, who was also nutty enough to let me cover them with face paint and lay in my pond for a test photo. I somehow convinced my only bald-by-choice friend, David, to help me out.  I determined from the test that we needed a larger light source, since it made more interesting reflections on the water, and that the water needed to be disturbed, or it would just look black.

I went to the airport the next morning for a leisurely flight to Miami….I built in plenty of time to look around the neighborhood, rent additional lighting gear and prep for the shoot the next day. Unfortunately, a huge thunderstorm had other plans, and I literally spent the night in the airport while doing the constant rebooking/flight cancellation dance between gates all night. I finally made a flight at 5:00am, and barely made it to Miami in time. I’ve always been anal about arriving in town for big shoots at least the day before, so 18 hours of flight delays made me very nervous. 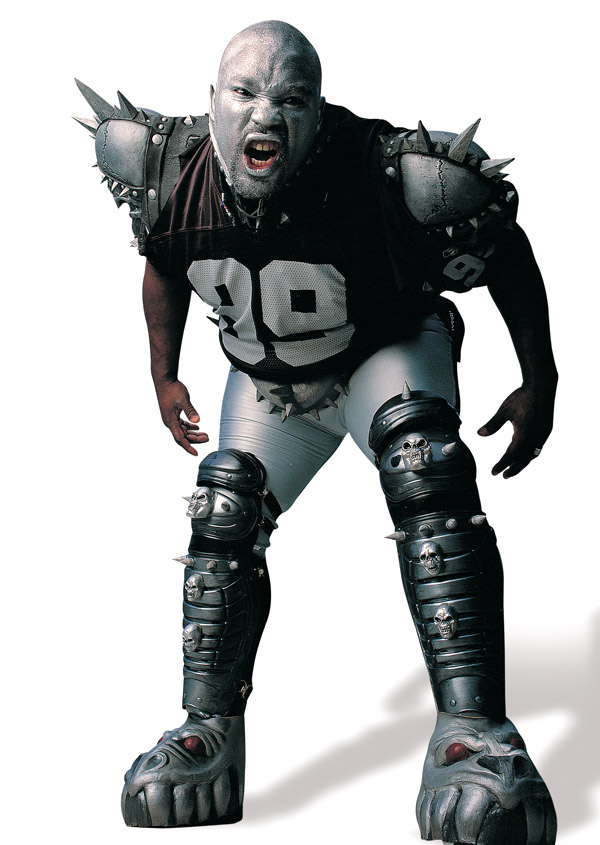 A trusted assistant Cy Cyr, and makeup artist Paula Abraham were already en route from Orlando and met me at Drew’s house. Paula setup her airbrushing tools, while Cy climbed in the pool and covered the bottom with black plastic. We used weights to secure it to the pool floor and keep the plastic from floating around.  We set up lighting for both shots, and waited for Warren to arrive.

It was an interesting location for a shoot. Drew is probably the most famous sports agent in the world: he’s the only agent ever featured on the cover of SI, and he’s reviled in many NFL front offices for his hard-hitting negotiating skills. For us, he was a gracious host, and we were happy to photograph Warren in a comfortable, relaxed environment.

Warren was great during the shoot…..an absolute showman, and he went through a million great poses for us, screaming and hissing like some sort of Raider monster. He was having a great time, and was fabulous to work with. We had both setups done quickly and we were able to get him back in his normal attire and on with his day.  As I returned to the airport, I was able to scratch another crazy idea off my list.