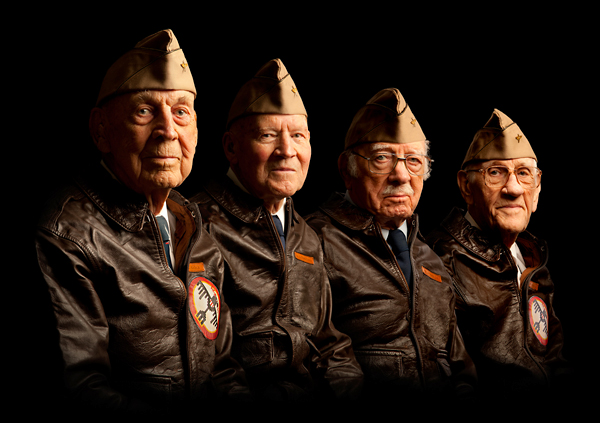 In 2011, I was lucky enough to photograph three of the remaining five Doolittle Raiders for a story in Smithsonian Air & Space.  It was an incredible experience and was a wonderful introduction to many wonderful people in the warbird community.

Through some wonderful new friends I met on this assignment, Larry Kelley, a B-25 owner and Doolittle supporter, and Tom Casey, who manages the Raiders' appearances, I was invited to photograph the Doolittle Raiders 70th Anniversary  April 16-20 at Wright Patterson AFB in Dayton, Ohio.

I jumped at the chance, and was also able to bring my father (a big military aviation buff) with me on the trip to help me (and keep my light stands from blowing over!)

Larry Kelley, who owns and pilots “Panchito”, a vintage B-25 (and the one we used in the Air & Space portraits in 2011), was on a quest to bring a large contingent of B-25's to Wright-Patt for the anniversary celebration and flyover.  Through tireless fundraising and incredible determination, he was able to get 20 B-25's and their crews to Grimes Field in Urbana, Ohio  and the Air Force Museum at Wright-Patterson in Dayton for the event.

I had two goals for the event: first, to capture the massive gathering of B-25's for my friend Larry.  (It was the largest gathering of flying B-25s since the end of WWII!).  Second:  I wanted to photograph a group portrait of all the surviving Raiders together. 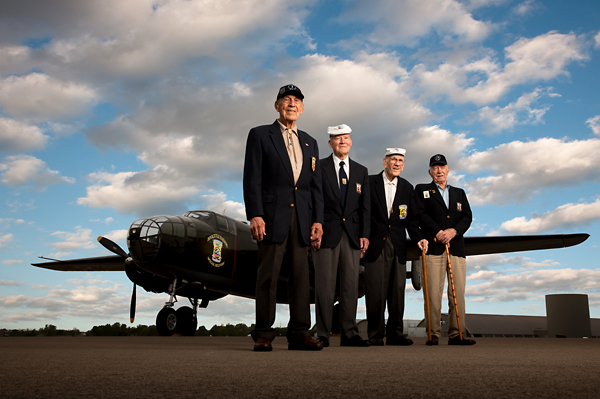 Unfortunately, just after I arrived, we found out that one of the surviving Raiders, Lt. Col. Robert Hite, was too ill to travel to the reunion.   We were however,  lucky enough to photograph the other four survivors:  Col. Richard “Dick” Cole, 96, Maj. Thomas C. Griffin, 95, Lt. Col. Edward J. Saylor, 92,  and Staff Sgt. David J. Thatcher, 90.

Time was at a premium, as the Raiders had many different events and appearances scheduled, but I was able to make a group shot with them at Wright Patterson, specifically, the closed runway of the US Air Force Museum, which was temporarily turned into a ramp for 20 B-25's specially for the event.  The area was open to the public, and there were hundreds of people milling around to view the planes (Picture a busy airshow crowd).  During a brief 2-minute window, we were able (with Larry's help) to clear a path and photograph the Raiders in front of “Special Delivery”  a B-25 from Galveston, Texas with the Doolittle logo on the nose.   It was a bit unnerving to have an audience of 200 people (and a CBS Evening News crew) over my shoulder watching while we did the picture, but we got it done in record time. 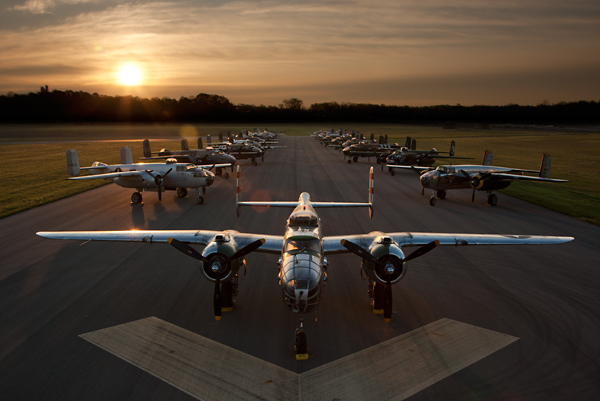 Twenty B-25's on the old runway at the Air Force Museum at sunrise.

With the help of some generous ramp crew from  the USAFM we were able to secure a jetway ladder and photograph all 20 B-25's at sunrise the next day.  We then set up another portrait session at the Raiders hotel where I photographed each Raider on white and black backgrounds with old vintage leather A-2 jackets and flyboy caps.  Matt Sager, a photographer/brilliant mechanic from the Panchito crew helped out on both shoots and saved my butt with his Boy Scout preparedness.

The anniversary was an amazing experience, and it's gotten good play in a few publications in the months following the event, including AOPA Pilot magazine, which ran a series of portraits, and a cool photo I took from the end of the runway during the Grimes Field takeoff.  WWII magazine also ran the group shot we made on the field at the Air Force Museum.  I've included some of the tearsheets below. 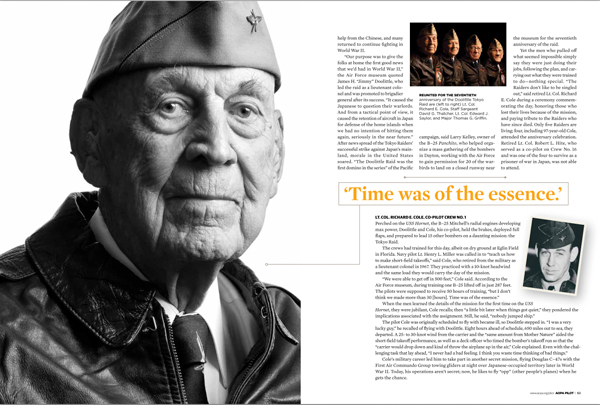 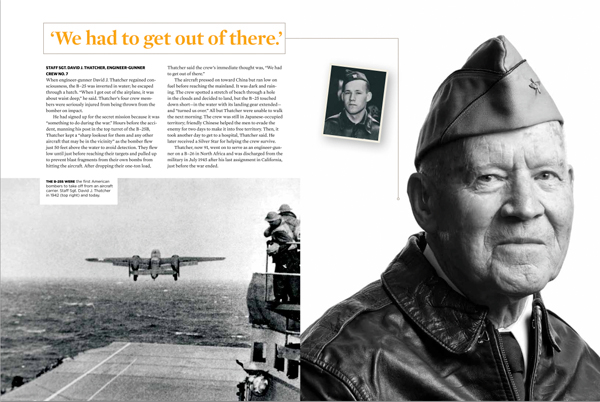 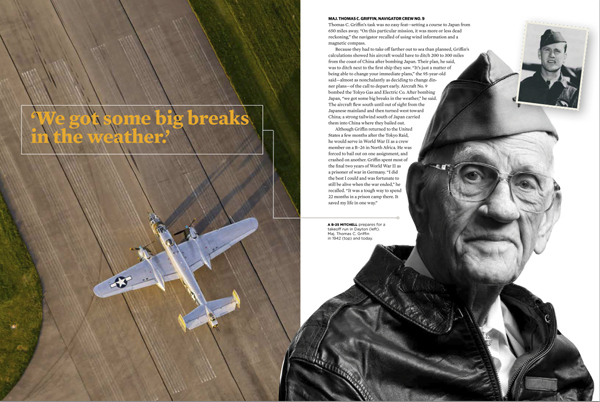 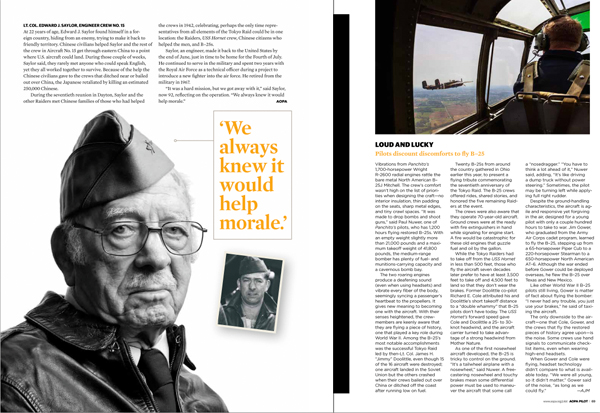 The four spreads from the AOPA Magazine……I photographed the portraits. 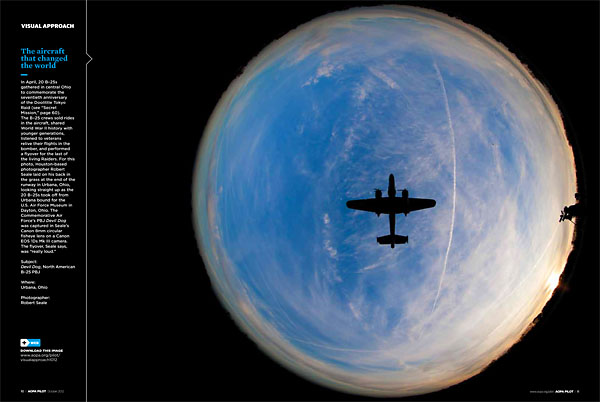 This is the last spread of the AOPA Mag: I was lying down at the end of the runway with a Canon 8-15mm Fisheye as the last plane took off for Wright-Patt from Urbana. 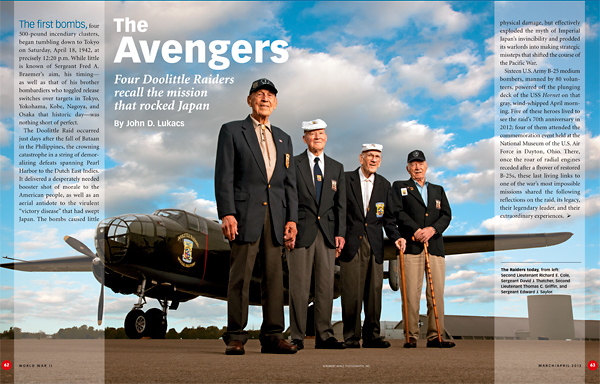 This is the spread from WWII Magazine, published by Weider History Group.